Back in September 2017, I asked the question: Who is missing from the NFL Hall of Fame?  Of course great players like Donnie Shell, L.C. Greenwood & Andy Russell are obvious oversights. This weekend, the final football game of the 2017 season will be played in Minnesota but importantly the latest list of inductees to the NFL Hall of Fame will be announced. None of the aforementioned get their due this year; but unless there is some fiendish collusion among the 48 media members comprising the Pro Football Hall of Fame Selection Committee; Alan Faneca should be announced as the latest Pittsburgh Steeler to don the gold jacket.

That said, I am answering my own question with a person who never coached nor played in the NFL: William G. Nunn, Jr.

Bill Nunn was more successful as a basketball player getting an offer to play from the Harlem Globetrotters after graduating from West Virginia State. He turned that down to join his father who was the managing editor of the Pittsburgh Courier; a weekly newspaper that covered the news for the black community. Although based in Pittsburgh it was nationally syndicated.

When the Steelers joined the NFL is 1933 there were only two black players in the league: Joe Lillard of the Chicago Cardinals and Ray Kemp of the Pittsburgh Pirates (Steelers) who had played for Art Rooney’s semi-pro team. Both were out of the NFL by the next season and the league was completely segregated until 1946. Through the 1950’s the NFL had few black players; for example, the 1952 Steelers had six African-Americans in their training camp.

Few NFL teams had fulltime scouts in the 1950’s and those scouts spent most of their time with the major college football powers who like the NFL either were totally segregated or had very few black athletes. As the sportswriter among other duties; young Bill Nunn published the Courier’s All-American Football Team starting in 1950. The Courier’s All-American team focused on players from what are now called Historically black colleges and universities (HBCUs).

Players from the HBCUs received little publicity and the few NFL scouts did not attend their games. Contact between the schools and the league were minimal. Bill Nunn through the nationally syndicated Pittsburgh Courier stepped into the breach with other African American newspapers but Nunn’s black college All-America football team was the oldest and well most well-known.

Unfortunately, not many of the players and coaches that benefitted from Bill Nunn’s clarion call to recognize these players are available to give personal testimony to his efforts. He was mostly known as the longtime Pittsburgh Steelers scout and his connections with the HBCU football programs led to the Steelers landing underappreciated college players like L.C. Greenwood, Mel Blount, John Stallworth, and Donnie Shell. As, then Steelers personnel director Art Rooney Jr. said, “Every year he’d bring those 22 guys to town, and I’d say to myself, ‘My gosh, they’re better looking than the players we have in our locker room.’” Undoubtedly, Nunn will be voted to the Steelers Hall of Honor.

Bill Nunn’s influence spread far beyond the Steelers. He impacted the entire NFL. In the 1960’s he began bringing the Courier All-American’s to Pittsburgh for an annual banquet. While the NFL was gaining more black players (or tan as Bill Nunn himself would refer to his brethren back in the day) the Washington Redskins had just integrated in 1962 to retain access to the federally funded stadium that would become known as RFK stadium. Robert Kennedy as attorney general along with Interior secretary Stewart Udall threatened to evict the Redskins unless they desegregated. The lure of a public funded stadium caused former owner George Preston Marshall “to lead” the team to integrate. The more egalitarian AFL also applied pressure by being open to players of all ilk and picking and paying Courier Black All-Americans such as Emerson Boozer to play in their league.

This clipping from the Pittsburgh Post-Gazette archives shows some of the players at his Courier All-American Banquets: 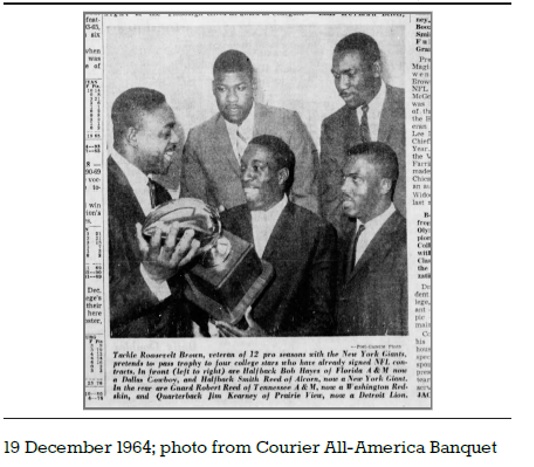 Roosevelt Brown who is presenting a trophy was selected by the New York Giants 12 years before. Reportedly after seeing him featured on the Courier’s All-America list and seeing Nunn’s description including a quote from one his college coaches saying, “It is my considered opinion that Roosevelt Brown is the best tackle developed at Morgan State in recent years. He has weight, speed, and aggressiveness. If some pro team doesn’t pick him, it will be missing a beat.” The Giants took a flyer and drafted him in the 27th round – pick number 322 overall. Chances are he would never have been selected if not promoted by Bill Nunn. Rosey Brown is in the Hall of Fame.

OTHERS RECOGNIZE NUNN’S CONTRIBUTIONS TO FOOTBALL

The New Yorker magazine wrote about Bill Nunn in 2014 following his death. The article described him as the man, “Bringing Black College Football Out of the Shadows.” The article cites R. C. Gamble, who was a star halfback at South Carolina State. He stated, “Had it not been for the likes of Bill Nunn or the likes of Lloyd Wells, we would not have had that pipeline.” Gamble never made it to the Hall of Fame, but if not for Bill Nunn he would not have made it to the NFL at all. Gamble played two seasons for the Patriots.

These are just a couple examples but many more NFL players owe their opportunity to play in the NFL through the efforts of Bill Nunn. He was a one-man scouting department. He travelled to many of the games; established relationships with the HBCU coaches; wrote about the players who would otherwise get no ink from the major papers of the day.

Bill Nunn was recognized and elected to the inaugural Black College Hall of Fame in 2010. A worthy honor for his contributions to all the HBCU programs. As longtime South Carolina State & Howard University head coach Willie Jeffries said of Bill Nunn and the Pittsburgh Courier, “If you got your name in that paper, you were in tall cotton.”

The Pro Football Hall of Fame has enshrined 23 persons over the years who are categorized as “contributors.” The last contributor elected into the Hall was Dallas Cowboys owner Jerry Jones. Bobby Beathard is a nominee this year. The Hall of Fame process states that ”Any person, including the 48 elite members of the Selection Committee may place in nomination any eligible players, coaches or contributors.”

So, during my visit to the Hall of Fame last September; I asked how I could nominate a person. A Hall employee said it was as simple as leaving a written note. I nominated William G. Nunn Jr. The Hall of Fame states; “Every nomination received will be processed and forwarded to the Selection Committee.” Since I nominated Mr. Nunn in September I am not sure when his name will go to the selection committee. The Senior and Contributor finalists are selected by a special nine-person committee appointed from the full 48-member Selection Committee so if he was considered this year they did not include him since Bobby Beathard is the only contributor finalist.

Chuck Noll once jokingly said that Bill Nunn was, “One of the few sportswriters who ended up making something of himself.” It’s no joke; Bill Nunn was instrumental in literally changing the complexion of the NFL. The Pro Football Hall of Fame has a definitive gap until it is filled with the bust of William G. Nunn Jr.

We’ll see how this process goes, now for my song selection. There is a football game on Sunday. That was supposed to be the destination of the 2017 Pittsburgh Steelers but their journey was never completed:  “If I had a heart … this will never end cause I want more … give me more … I’ll see what tomorrow brings.”