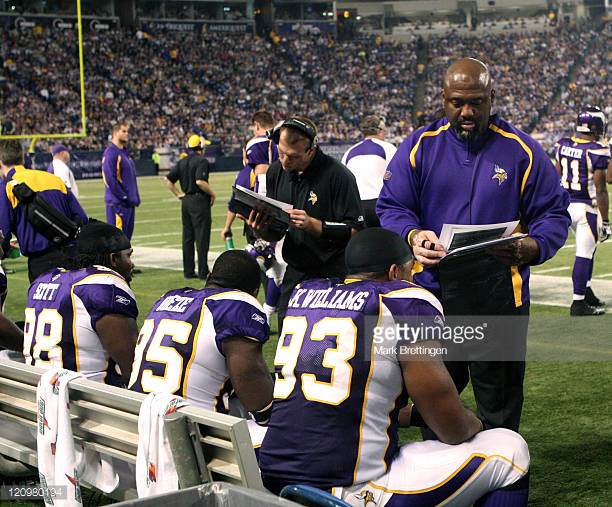 I’m downright elated John Mitchell is remaining a Pittsburgh Steeler but it sounds like he is handing most of the reins to Karl Dunbar, hired yesterday by the team. It’s a move no one could predict because Mitchell didn’t retire so we didn’t even have time to guess (and inevitably, be wrong) about who would replace him.

But it’s no surprise Dunbar is the hire. As is true for most of Mike Tomlin’s coaching selections, there’s a connection between either him, the region, or both. Dunbar isn’t from Western PA (newly signed DBs coach Tom Bradley is, however), but he and Tomlin spent 2006 together when they were both members of the Minnesota Vikings.

So who is Karl Dunbar? Let’s run through his bio and then get to some of his core philosophies.

Dunbar began his NFL career as a Steeler. Drafted in the 8th round of the 1990 draft out of LSU by Pittsburgh, he didn’t last long in the league. Getting on with his life’s work, he joined the police force in Louisiana. There, he helped stop the rampant selling of cocaine, according to this article, working 60 drug busts as a cop. Other officers gave him the nickname of the “Human Battering Ram,” for his ability to bust down doors.

But when he was nearly hit in a shootout one night, his wife made him take a different career path. He broke into coaching at his local high school before taking a job at Nicholls State in 1998. In 2000, he went back to his alma mater to be LSU’s strength and conditioning coach. I think that’s a unique part of his resume. He knows how guys need to train, where their weight should be at, how the body moves and how to maximize the weight room, even if that won’t be his job in Pittsburgh (that’s on Garrett Giemont). But you don’t see a ton of coaches with that on their resume and I think it’s attractive. You’ll hear Dunbar call back on those types of things later in this article.

He broke into the NFL with the Chicago Bears in 2004 and then went back to LSU the following year to be their DL coach. That’s been his job ever since with stops in Minnesota, the Jets, the Bills, and then Alabama for the past two seasons. Now, he’s in Pittsburgh.

I know some people have asked some questions about his skin condition. It’s called vitiligo, a discoloration of the skin, for which there is no known cure.

Back to the important stuff – football. I got a hold of one of his coaching clinics he gave in 2008 while a member of the Vikings. I am going to go through another one over the weekend and we’ll write about the key points on Monday. Today though, we’re focusing on his approach to stopping the run. It was a 52 minute clinic that ran through basically all elements of the game. We’re going to go through it chronologically with some quotes, teaching points, and tape he used.

Before Dunbar got into the nitty gritty, he went over a couple of big-picture things about his coaching style. He wants his players to be excited for one another, to cheer and root for the guys on the bench. That helps players accept their role and be excited about the bigger picture.

And as a coach, Dunbar wanted to make sure the players felt like he was on their side.

“I think when guys understand that everything you do is for them and not to them, and the information you’re going to give them is going to help them, I think it’s balls to the wall.”

And he had big goals with an attacking attitude of being the best he can be.

Later in the clinic, he noted he isn’t someone who yells and undresses guys on the sideline. He told the story of one of his players who got called for a personal foul on a late hit after hustling to the ball. The coordinator started yelling at Dunbar in his headset and wanted Dunbar to chew his player out. He refused and gave the headset to the player instead so the coordinator could yell. After the game, the coach asked why Dunbar wouldn’t yell at him. He responded that if the coordinator is yelling at him, his positional coach is yelling at him, then the player has no one to go to.

“I’m not going to be the guy who is going to lose my cool. I think if you lose your cool with your players, they’re going to lose their cool.”

Of course, that doesn’t mean Dunbar has high expectations. He wants to coach things the right way.

“What we teach, we demand.”

So I think that is one change from John Mitchell, who would definitely go after his guys pretty hard. All tough love, of course, but there is a personality difference.

How does Dunbar teach the run? From the ground up. It starts with these basic ideals, which he outlined in this slide.

The stance is where it starts once the call comes in. Dunbar preaches having the same stance for the run and the pass; the only time it changes is in short-yardage or goal line situations. He also made it clear that coaches need to teach players a left and right-handed stance so they’re versatile and can align anywhere.

“I think you’re doing your kid a disservice if you never let him get in his weak stance.”

It all starts with vision on the ball. That’s something Dunbar constantly repped. For the defensive ends, the Vikings ran a 4-3 and in Pittsburgh, sometimes the end is lined up over the tight end, the key is the outside knee of the tackle. For everyone else, it’s the ball. Eyes can never come off it, even when shifting alignment, and it’s something they drill in camp.

Firing off the ball means three things: Hands, hips, and feet. The first movement comes from the hips, causing the hands to move, and then the feet follow last. Hand placement is where they start, working on the linemen’s punch. Hit the breastplate with thumbs up, elbows in. Keep space between you and the blocker, don’t rock, cock back, or get in close to the offensive linemen.

Dunbar put it this way. The hands and arms are the levers of his body. He only needs his helmet in order to tackle.

He does not believe in a six inch power step, something that is commonly coached, because the player too often stands up when trying to take that measured step.

He uses a shrug release, swiping with body hands to pull the blocker across (not towards) the body and then shed. Vision must be on the ball the entire time, even as the block is being defeated.

“While we’re looking for the football, we want to press this [linemen] back. We want to knock him out there. And then we want to make a violent release.”

One example you can see here of that shrug release.

And here it is in game action. Watch #93 defeat the block with a shrug release and make the tackle.

With the background of a strength and conditioning coach, Dunbar values the power clean as a measure of explosiveness. So keep an eye on any DL prospects who are setting records at their school. He isn’t a decision-maker, of course, but he’ll have influence on the draft (Mitchell basically picked Javon Hargrave).

Later in the talk, he stressed the importance of working on the abductors and inner thighs. Defensive linemen can’t succumb to hamstring injuries. With all the lateral movement they have to do, they simply can’t play through that type of injury or at least, can’t be effective.

Throughout camp, they’ll rep the heck out of the hips and the hands. To him, it’s all about generating power from the hips. He has a funny way of expressing it.

“Pinch a penny between your buttcheeks,” he says as the way to describe the stance. Squeeze the penny, the hips come forward, and the player creates explosion and power.

“We have races to see who can get from the ground to the man the quickest,” he said about his drills.

While there wasn’t as much emphasis on the clinic on feet, he made the point about not crossing your feet over, especially on stunts, and not to get your base too narrow. Otherwise, you’re prone to getting turned by the block.

There was also an importance on tackling. While the Vikings ran a 4-3, there were still similarities to a 3-4 defense. Dunbar said because their ends drop so much – at the time, it was Brian Robison and Jared Allen – he had to create drills for the ends to practice open field tackling.

“We always try to work on tackling…we work on open field tackles with our defensive ends because we do a lot of zone dropping. I had to come up with drills that got them dropping in the flat, tackling the back, the tight end…”

“Running through contact…you never want to hit a guy and stop your feet. You want to break his ribs with your forearms, come through with your hips and your head up, and run through him.”

Under Leslie Frazier, the Vikings ran a lot of zone dogs (LB blitzes). So the defensive line did plenty of stunts on those blitzes. You’ll get the same in Pittsburgh.

Towards the end, they discuss running to the ball. If you know John Mitchell, you know how important that is to him. Dunbar is probably cut from a similar cloth, though I don’t know if anyone can be more fanatical about it than Mitchell.

Throughout the clinic, the phrase “B.O.B” popped up on the screen. It stands for “break on ball.” If you’re unblocked or defeat the block, Dunbar teaches getting to heel depth of the OL and then flatten to the ball. Repped it time and time again.

Again, here is the drill translating to the tape. Tackle blocks down so the end squeezes and chases.

Dunbar recognized all linemen get knocked down. But that wasn’t what he stressed.

Here’s an up-down drill they worked on during practice. Dunbar points to the cone where he wants the players to go and they rally to it.

And he flashed multiple clips of Pat Williams and Kevin Williams, the “Williams Wall” as it came to be known, running to the ball. Even one example came in a 2008 preseason game against Pittsburgh where Kevin Williams stripped Rashard Mendenhall. As Dunbar tells it, after the play, Williams talks a little smack at Tomlin standing on the sideline.

Finally, to circle back to the beginning, Dunbar is all about team. Doing everything as a unit. Celebrating each other. He coaches his guys to “hoorah” after reps. They all go through a drill, run to a spot, huddle up, and break it down. Create a tight-knit bond where if one guy succeeds, the whole group succeeds. No egos in the room. I think that’s similar, and maybe stressed even more, under Dunbar than Mitchell. You can see it in the up-down drill above.

Hopefully that gives you good insight into who he is as a coach. On Monday, we’ll delve into his philosophy as a pass rusher.