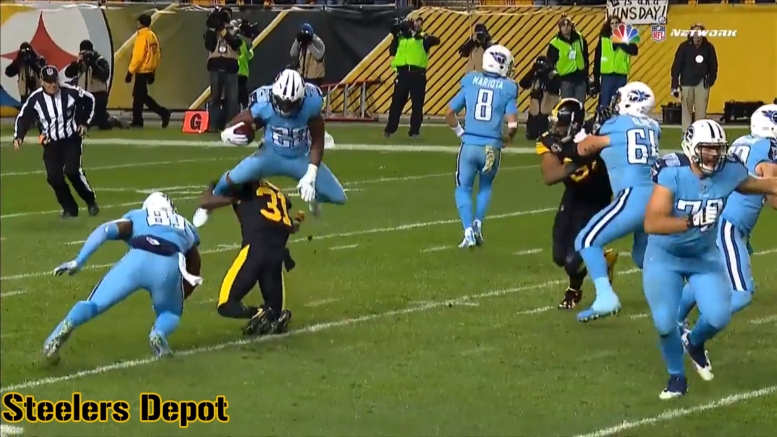 Mike Hilton has already become a fan favorite in Pittsburgh during his first season after spending time on the practice squad for the Pittsburgh Steelers the year before. By the second half of the season opener, the former undrafted free agent had already taken over the nickel cornerback role and established himself as one of the better players in their secondary.

His most endearing quality is the fact that he embraces every aspect of the game. Far from being just a coverage player, he does not prevent his diminutive height from being a physical presence in all components, and is an active participant both in the pass rush and against the run.

In that regard, Hilton led all defensive backs who saw more than 25 snaps against the run in run-stop percentage (four players actually had a higher percentage, with William Gay at the top with three run stops on 21 running plays).

Using the benchmark of having played at least 25 percent of the team’s run defense snaps, however, Hilton stood head and shoulders above the rest of the league. On 144 run snaps played, he recorded 21 combined tackles, and 12 of them went for stops. The 12 stops on 144 run snaps translates to a run-stop percentage of 8.3 percent.

The next-closest player was Lardarius Webb of the Baltimore Ravens, who recorded eight run stops on 134 snaps against the run, but that translates to a run-stop percentage of just six percent. In other words, the margin from first to second is significant, with a drop-off of greater than 25 percent.

He was so impactful against the run, in fact, that he still managed to record the fourth-most run-stops among cornerbacks altogether in spite of the fact that he ranked 102 in terms of snaps played against the run. As a nickel defender, of course, he would not be involved in many running plays.

Believe it or not, but Trae Waynes led the league with 15 run stops at cornerback, which just goes to show you that you can actually teach poor and unwilling tacklers to do it at the professional level. He had just two missed tackles on 369 run snaps with 17 total tackles. Trevor Williams and Desmond King, both of the Chargers, had 14 and 13 run stops, respectively.

A major caveat is in order here, for those of you who may have been waiting for it. A slot defender is naturally more likely to be active in the running game than are boundary cornerbacks, so it should be anticipated that they might rank higher than those who see every down.

Regardless of that fact, however, Hilton’s body of work in his first season, including his work against the run, is deserving of praise, even with four missed tackles against the run, which ranked tied for 13th. There is certainly room for optimism as he heads into year two with a season of playing experience under his belt.