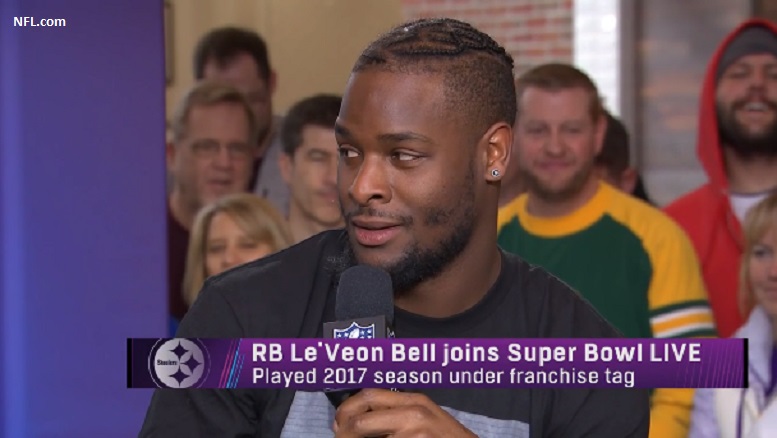 Pittsburgh Steelers running back Le’Veon Bell probably needs a history lesson when it comes to him knowing what to expect contract-wise from the organization this offseason and his agent Adisa Bakari should be the one to give it to him.

Bell, who made the media rounds on radio row Friday in Minnesota, MN ahead of Sunday’s Super Bowl game, talked quite a bit about his current contract negotiations with the Steelers and how he still hopes to sign a new deal prior to them possibly placing the franchise tag on him for a second consecutive year. During a Friday interview on NFL Network’s Super Bowl LIVE, Bell said his current contract negotiations with the Steelers are all about the guaranteed money.

“Yeah, a lot of it is about the guarantees,” Bell said. “That’s what a long-term deal really is, you know? You want that security to it. That’s why I said I’ll play on the tag. All that’s going to be guaranteed. You want to tag me again, OK, all that’s going to be guaranteed. That’s how I kind of look at it because I don’t want sign a long-term deal and everybody says I signed for $70 million but only the first year is guaranteed. So the first $17 million that you make in that year that’s the only year that’s guaranteed…”

The fact that Bell threw that particular set of numbers out there is quite interesting and maybe not a coincidence. A five-year, $70 million contract would average $14 million a season and that’s just a little less than what Bell would earn in 2018 should he play under the franchise tag again. As far as the $17 million that Bell used as potential first-year earnings and the only true guaranteed money, that number makes sense as well. After all the Steelers gave wide receiver Antonio Brown a $19 signing bonus almost one full year ago and that was reportedly the only truly guaranteed money that he received. The practical guarantee at signing, however, was $19.910 million as Brown’s deal called for a base salary in 2017 of $910,000. I’m not overly sure if Brown has some skill and injury guarantees in the first three years of his contract but if he does, those amounts are not fully guaranteed.

If Bell thinks he’s going to get a signing bonus larger than the one Brown received and more than just the first year of the contract fully guaranteed, he’s delusional. Just look back at the recent lucrative contracts signed by defensive end Stephon Tuitt, guard David DeCastro, defensive end Cameron Heyward and Brown, just to name a few.

Now, the Steelers do usually put roster bonuses in years two and three of those lucrative long-term contracts and those are usually scheduled to be paid by the fifth day of that league year. For example, Brown is due a $6 million roster bonus by the fifth day of the league year in March while Tuitt is due a $7.5 million roster bonus at that same time. While those roster bonuses aren’t fully guaranteed when the player signs the contract, the Steelers have a long history of paying out the full amounts of all long-term lucrative deals that they agree to. Sure, there have been instances when they haven’t like several years ago with outside linebacker LaMarr Woodley, but he just couldn’t stay healthy.

Below is what a five-year, $70 million contract could potentially look like for Bell and it includes a $17 million signing bonus and him earning nearly $18 million in total in 2018. Via the structure below, Bell would earn $23.355 million by the 5th day of March 2019 and $31 million by the end of the 2019 season. Through the first three years of such a deal Bell stands to pocket $45 million in total, or $15 million per season.

In short, a five-year, $70 million contract signed by Bell virtually guarantees him $45 million even though the real full guarantees are only nearly $18 million. Additionally, years two and three of such a contract might could be negotiated to include some skill and injury guarantees, but that’s about it.

Bell was asked on Friday if, hypothetically, the Steelers offered him $50 million guaranteed would he sign?

“50 guaranteed? Absolutely,” he replied. He then paused when asked about $30 million guaranteed.