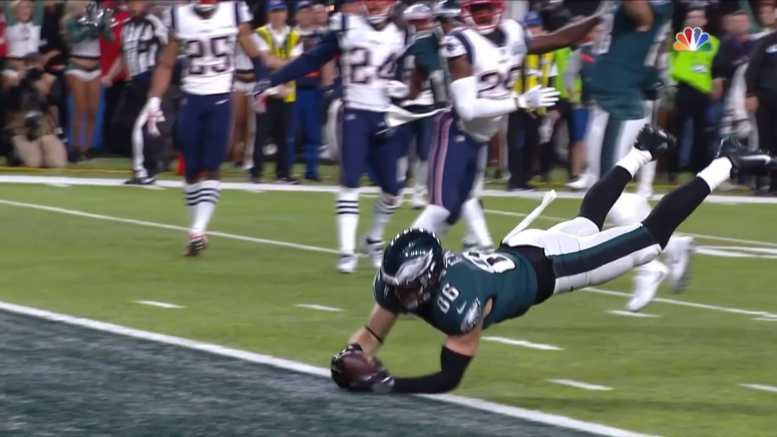 Often enough when the New England Patriots are on the field, there are three primary groups that can affect the outcome of the game: the Patriots, the opponents, and the officiating crew. We have previously documented the curious history of questionable calls going New England’s way this season, but last night, they largely stayed out of the spotlight.

That was no more evident than on two of the Philadelphia Eagles’ touchdowns on the night, including the eventual game-winner to Zach Ertz with under three minutes to play. Two of Super Bowl MVP Nick Foles’ touchdowns went to booth reviews for head official Al Riveron. One called stood, the other was confirmed.

The first of the two reviews came midway through the third quarter, on the Eagles’ opening possession of the second half. Facing third and six from the Patriots’ 22-yard line, Foles connected with undrafted rookie wide receiver Corey Clement on a deep target, covered by a linebacker with a safety trailing.

The receiver initially bobbled the ball while establishing possession but appeared to do so before he spilled out of bounds. He then lost possession of the football while going out of bounds, but the ball never hit the ground. Riveron, who has been highly criticized for his review calls this season, elected to allow the call to stand.

This was a departure from the norm, as the head of officiating did not seem to consistently adhere to the principle of only overturning calls that presented ‘clear and obvious’ evidence that the call on the field was incorrect. While Pittsburgh Steelers fans will cite the overturned Jesse James touchdown, you can make that case without it.

That would not be the only touchdown that goes to review during the game, and the second one bore a greater resemblance to the James play. It was the game-winning grab by the tight end Ertz, as mentioned, but in actuality it was more similar to a previous Xavier Grimble touchdown.

It came on third and seven at the Patriots’ one-yard line, trailing by one point. Foles found his tight end working one on one against Pro Bowl safety Devin McCourty, who lost his balance. Ertz beat him inside, snared the ball and took two steps while the safety got an arm tackle.

As the tight end went to the ground, he dove across the goal line, and the ball touched the ground, spilling out. Unlike the James play, who was deemed ‘going to the ground’ while making the catch, Ertz—like Grimble—had already established himself as a runner, so when he crossed the plane, it was a touchdown, and he did not have to…survive the ground.

The play went up to the booth, but Riveron ruled that Ertz was a runner, and that the call on the field was confirmed. This means there was clear and obvious evidence that the call was correct.

The NFL has realized over the course of this season that the catch rule needs to be rebuilt from the ground up. I’m sure they are breathing a heavy sigh of relief that it ultimately did not play a role in the outcome of the biggest game of the year before they could try, once again, to fix it.