You all know there’s nothing I love more than taking a deep dive into special teams. And I gotta defend Jordan Berry a little bit. On paper, no, the numbers are not good. Average punts that put him near the bottom of the league. No question, there’s room for improvement and he’s still working on overall consistency of his game.

But the low average is more a product of the Steelers’ offense and the system he plays in. Just like a QB in a West Coast offense isn’t going to have the same yards per attempt as someone in a four verts attack, the Steelers place a higher priority on hangtime and direction, two things Berry does well.

For starters, we also have to understand how the Steelers’ offense “hurts” Berry. An offense that generally was able to move the ball for at least a couple first downs on many drives created fewer “open air” punts for Berry.

On punts from his own one yard line to his own 39, Berry had the 25th fewest tries of anyone in the league. But his average on those punts was respectable, certainly out of the gutter. He averaged 47.5 yards per punt, good enough for tied for 15th in the league. Not spectacular but it paints a drastically different picture.

When punting from his own 40 or closer to the opposing end zone, his average dipped to 36.5. That was the lowest of all qualified punters. That’s where the system comes into play. In those situations especially, the goal was hangtime and direction. Minimizing returns and pinning teams back while avoiding a touchback, a real pet peeve for Mike Tomlin. Here are a couple examples, true on coffin corner and the open air type punts.

During the summer, we’ll look at this throughout the entire season but from Week 14 and on, including the playoffs, I charted a quick spray chart of where all of Berry’s punts landed. 16 in total. Keep in mind this doesn’t indicate distance, just simply where on the field the ball landed. We are looking bottom up, indicated by Berry’s name. 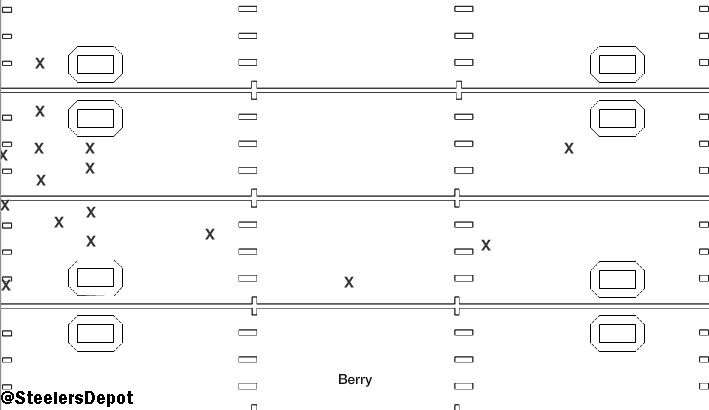 The one “X” that is cut off to the far left indicates a punt that went about one yard out of bounds.

Clearly, punts to the left corner, on or outside the numbers, was a priority for Danny Smith. And Berry did a great job of that. But that sacrifices distance, you can’t just boom directional punting, with an emphasis on hangtime. Most times, like the clips above, resulted in a fair catch because of the hangtime and ability to pin the return man to the sideline.

I love numbers. They’re a great starting point. But for special teams especially, they lose plenty of context. The “why” is more important than just the “what” and Berry generally did what he was asked to do at an above average level.