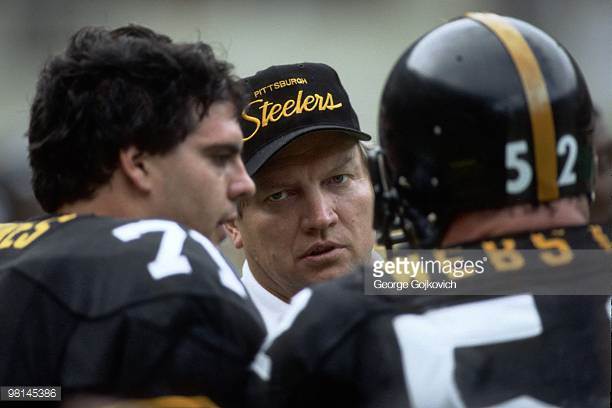 Bringing you another Pittsburgh Steelers’ interview courtesy of our good friend Ron Lippock of the Pittsburgh Sports Daily Bulletin. Today, Ron interviews Ron Blackledge, who served as the Steelers’ offensive line coach under Chuck Noll. They talk about how Noll hired him, the guys he coached, and what he takes away being part of the organization.

First, can you let readers know what you’ve been doing with yourself since your time coaching in the NFL ?

Well, I’m retired, I’m seventy-nine years old and am back in my hometown of Canton, Ohio where I grew up and went to school. I have three children and ten grandchildren and lots of activities to go to. Birthday parties, seemingly every other weekend, games… It’s great watching them grow up and play. It’s a full time job and I love it.

Let’s start with your hire in Pittsburgh as the offensive line coach. How did that happen? What did Noll say to you?

After he quizzed me, he was very open. He told me the job was mine if I wanted it. That shocked me. We met at the airport – the team was on it’s way to play it’s last preseason game. He asked me if I would fly down to Knoxville and talk more about football. I went with him and we talked more in his hotel room. He told me again the job was mine. This was before cellphones. My wife saw I got the job while watching TV.

Tony Parisi fixed me up with some football shoes and I stood on the sidelines of that last preseason game, I had to look at the depth chart and the back of jerseys to figure out who people were. I helped on special teams.

Rollie Doetsch was the coach I was replacing and he offered to stay for six weeks or so to help me learn the system before moving on to his new job as coach of the Birmingham Stallions. But after two weeks they decided I could handle the job quickly. It was easy with guys like Courson, Brown, and Boures there. They helped me – we all got along and I ended up coaching there for ten years.

After my fifth year I remember asking Chuck if I was doing ok. He looked at me sternly and told me that if I wasn’t doing ok I wouldn’t have been there. It was ten beautiful years there. I loved it very much.

How involved was Chuck Noll in the offensive line coaching?

He taught me some things. It was good the way he taught it – playing with leverage, the correct way of pulling. But after he convinced me about things like bending knees and legs, then he let me go and coach.

He would stop by my offensive line meetings for the first couple of weeks, then he let me go. We’d converse sometimes but not often. He told me three things which I kept on my wall there. First, linemen need to know who to block. You can’t make mistakes. The second was how to block their guy. In the chest, or down low…The third thing was that if they understood why. The player that got all three would be an All-Pro. You can be good with the first two, but if you had the third you could be great.

How involved were you in the draft process?

We were very involved. We worked out guys a lot. Between Art Rooney Jr, Chuck, and Dick Haley they had a good system. I did work out Dawson. He was one of the first guys I watched – he had a tremendous workout.

But we all watched film and gave thorough evaluations, We’d have six guys write reports on one person then all sit around and meet about them. During the draft we were all in the room and would be there if they had questions, but Chuck, Art, and Dick were the ones most involved.

It was a very professional way of drafting people. It was up to those three guys who to take. It’s a tough situation. You’re not right 100% of the time and reporters and fans often like to dwell on the guy you weren’t right about – guys we should have taken instead. But they have hindsight.

Who were some of the most underrated guys you coached there?

Tunch Ilkin is the first one I can think of. He was so smart – was an undersized guy. He was released several times his first year because he was an undersized guy. But his second or third year, he came back and made the squad. He could play several positions and I changed him everywhere due to necessity. When we brought Ray Snell in he could only play left tackle so [Tunch] had to move to right tackle. Then we brought in another guy so I moved him to right guard.

At the end of every year I sit down with each player and ask them how I can help them better. Ilkin looked at me at just said “Coach, if you just play me at one position, I could be really good.” Here I was thinking I was doing good by moving him around. The next year he was an All-Pro right tackle. I wouldn’t have thought about not moving him if he didn’t tell me.

Give us a good story that you think back fondly on during your time there?

During the strike year, everyone had to go somewhere to earn a paycheck scouting college players. Hoak went to Florida…I was afraid I was going to get sent to Timbuktu…

Art Rooney stopped into my office and told me he saw that my son was playing at Penn State. I just said “Yeah, that’s right”. We often talked about family and life stuff. He told me then that before I left I should stop by and talk to his son.

When I did he told me he wanted to send me to Penn State to scout the teams Penn State would be facing. So I got to see my son play. It was a real act of kindness. He was aware of what was going on so he arranged it so I could see my son play. That typified what kind of team it was. It was about family.

Tell me about how free agency affects the offensive line play today?

The Steelers the offensive line was consistent most years. We brought in some guys out of necessity but it was mostly sealed.

Free agency now. It does take continuity but most players can still fit in quickly. You have to be willing to blend in. It’s an individual thing. If the person is a team player then free agency can work well. If a guy is a money-hungry player – where money is first and the team is second – then it’s hard to fit in. There’s not a whole lot of loyalty between players and management now. Its gone by the wayside a bit – and that’s not a knock on the Steelers. But it’s hard now with so much money involved.

How has the game changed today versus when you coached?

I still think that if Chuck Noll were alive and coaching today he would still be a successful coach. He treated players like they wanted to be treated and didn’t act like he knew everything. The techniques are all still the same. They still need to be taught and used.

With concussions, some things have changed. But it hasn’t changed as much as people think. You still need to block and tackle and use your hands. It is a safer game. But it’s still rough and violent at times. I know they made some changes on kickoffs. If they can eliminate those injuries on kickoffs more there would be far less problems.

Any last thoughts on your time there?

I had a great time in Pittsburgh. They were great people to work with, I coached under Marchibroda in Indianapolis after Pittsburgh as well – and all the coaches I worked for gave me a great opportunity to coach and didn’t look over my shoulder.