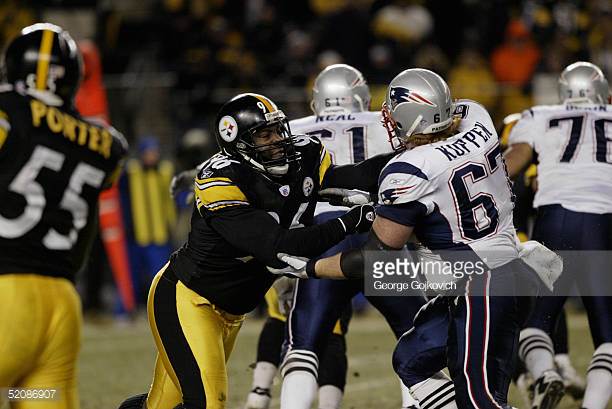 Bringing you another Pittsburgh Steelers’ interview courtesy of our good friend Ron Lippock of the Pittsburgh Sports Daily Bulletin. Today, Ron interviews former Steelers’ nose tackle Kendrick Clancy, who spent five seasons with the club from 2000 to 2004. He would go on to play in the NFL through 2009. Here, they discuss Clancy’s surprise of coming to Pittsburgh, frustrations with the team, but the realization that it was one of the best places he ended up.

First – let us know what you’ve been ding with yourself since your time in the NFL?

I’m not doing much these days. I’m pretty much a family dude. Raising kids. I don’t know what else I’m doing besides picking up kids…taking care of my kids. My life is kind of boring right now. I’ve been away from the hustle of every day sports, taking it easy.

How hard was the adjustment for you?

It’s tough trying to find something to do with myself. I started a business but it was a major catastrophe! I really don’t have other skills. I didn’t finish my degree so I’m not sure what to be doing with myself now. I have a lot of issues from playing – I just thank God I still have my sense about me. Not like some players.

When I left football, I didn’t watch it for three-to-four years. I was tired of it. I wasn’t bitter. Just tired. It got to the point where I was just tired of the whole thing. It drained me to the point that I didn’t know who I was anymore. I’m better now, dealing with things. I’m learning to live day-to-day.

Taking a step back, tell me a bit about the draft process. Were you surprised to be drafted by the Steelers?

I was kind of stunned to be drafted by Pittsburgh. They called me in the second round – I remember because it was a life-changing event, Then they took Marvel Smith. I wasn’t sure I was going to be drafted – they were the only ones that called me. Then they called me again in the third round and drafted me.

You think that was because they saw you as a nose-tackle when many weren’t running a 3-4?

I didn’t see myself that way but probably. I was kinda small. I only weighed about 270-280 pounds. So I didn’t see myself that way. I saw myself as a three technique guy. In college I played in a 4-3 scheme. I remember in mini-camp I called my college coach and told him I didn’t think I could do it. My coach just told me that when in Rome, do what the Romans do. I’m not sure that helped! But there was no way around it. I had to learn how to do it. I had to learn things that I had never done before.

Anyone help mentor you – show you how?

Kimo helped. Coach Mitch was a helluva coach. He would tell you what to do. It was a unique situation. We had a bunch of young players who ended up being really good. They don’t get enough credit for the drafts they had at that time. Keisel, Haggans, there were a whole bunch of us. I just wished I handled some things differently.

It was fun, I just wish I was more patient. Let the process work. I was frustrated at not playing. I was just used to playing all the time and now I wasn’t playing. I was riding the bench and I knew I was good enough. I was just behind good players.

The coaches told me I had to be ready. I got my opportunity though when I went to New York. In New York I played really well.

Tell me about some of the fun moments in Pittsburgh?

Every day was like a comedy. One time [offensive tackle] Shar Pourdanesh…my rookie year he used to wear a robe all the time. Well, someone stole his robe – I forget who. But he was running around yelling about where his robe was. He was angry! I was on the ground rolling, laughing so hard. He was so mad about his silly robe!

Every day was something. There was always something competitive going on in the locker room. They had that little basketball hoop Jerome and guys would shoot at. They did the garbage can basketball shots too. I was always the guy on the side watching and laughing there…

How hard was it, leaving Pittsburgh?

I wasn’t going to play. I knew I had to get out. I wanted to be a starter. Who didn’t? It was no knock on Pittsburgh. They gave me the opportunity of a lifetime. I loved the organization and the fans. The Rooneys – I would go in and talk to him and he would tell me he knew a Clancy from the old country! He was a good man.

I played for three other teams, and when I look back on them the Steelers were just so much better with players than other organizations. The Giants were good too. The owners talked to their players – not just the starters, like some owners. They’d talk to all the players – the average ones. The Rooneys cared for their players and talked to everyone. It was different. It was a family environment.

How did that effect how you played?

It’s funny. When I was brought up in Pittsburgh you were helped. Kimo and the other guys helped us and we helped the younger players. Sitting in the film room, they’d tell us what we should have done on a play. But on other teams, when you did that players would take offense. It was really different in Pittsburgh. I tried to bring what I was taught to the other teams. But those guys acted like you were trying to outshine them. This was the way things were done in Pittsburgh though. It was unselfish in Pittsburgh. Even my position – you could make fewer plays.

Casey may have made thirty-to-forty tackles a year, On other teams it was very different. You could tell in Pittsburgh they were used to winning.

The only thing I regret is leaving New York. I was a starter and left a good organization to go to another in New York. Those were two cultures that were run close to the same. But in Arizona, it was very different. I wasn’t used to it! I’d be in meeting rooms with guys like Strahan and Jerome –  proven guys you listened too.  They didn’t have egos at all. Those guys – you listened too. But in Arizona they didn’t listen – and they weren’t half the players Strahan and Jerome were. It wasn’t like it was in Pittsburgh and New York. I was ready to leave there.

So what advice would you give then to younger players entering the NFL?

Take your time. Be patient. Don’t be in a hurry to do anything. Playing time issues…money issues…just be patient with everything.

One thing I did learn was how tired I was being around those guys in New Orleans. I couldn’t wait to get the hell out. That’s why you have to be patient. My lack of patience caused me to leave New York for more money. That’s what happens when you’re not patient – you get in situations you really won’t like. I was spoiled, if you know what I mean! I played for a great coach and great organization!