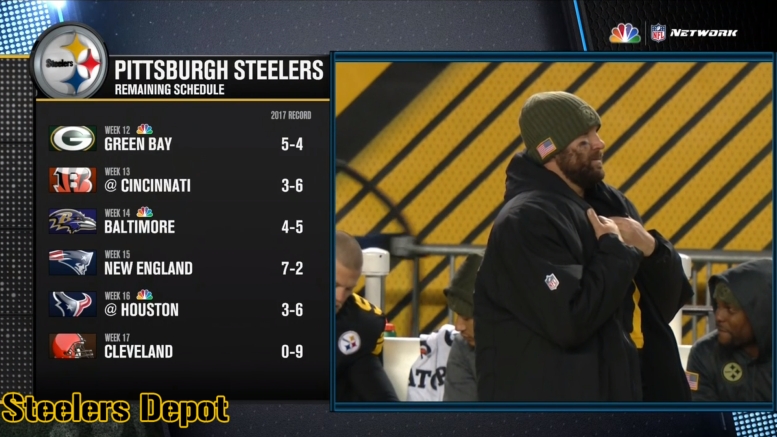 One of the most useless exercises of the offseason is calculating and analyzing every team’s ‘strength of schedule’ for the upcoming season, which is about as meaningless an attribute as there is. For a league that widely boasts of its parity, the focus on strength of schedule thoroughly disregards the year-to-year changes that every team experiences.

So you might have seen that the Pittsburgh Steelers in 2018 will be facing, on paper, one of the least daunting schedules in the NFL, tied as the 25th-easiest based on their 2018 opponents’ collective winning percentage in 2017, which came out to just .477. Only four teams face an ‘easier’ schedule, including the Cincinnati Bengals.

Let’s look at the actual teams that they will face, rather than their 2017 record. Aside from the obvious divisional opponents, they will face the following teams a Heinz Field: the Chiefs, Chargers, Jets, Falcons, and Panthers. On the road, they will pay a visit to the Broncos, Raiders, Texans, Saints, and Buccaneers.

A few of these teams had very bad records in 2017, some of which were expected, others not. The Raiders, for example, were an early popular pick to go to the Super Bowl, but Derek Carr struggled returning from his knee injury.

The Texans were not expected to do a lot in 2017, but that changed as rookie DeShaun Watson took over. Then he tore his ACL, and the team went into the tank. But with Watson returning, they should be projected as a better team than their 2017 record indicates.

The Jets or the Broncos, or both, are likely to acquire new starting quarterbacks this offseason, and one of them might be Kirk Cousins, who will obviously be a significant upgrade over who they currently have, while the Chargers and Chiefs are frequently a mystery.

And none of this even takes into consideration the fact that all of these teams are radically incomplete as of this writing. Not one team has undergone free agency or the draft to add to their roster. For the record, Alex Smith is still a member of the Chiefs for all intents and purposes, and it’s not unheard of that it might stay that way.

Last year, the Steelers’ opponents produced a projected strength of schedule  of .453, even ‘easier’ than this years’, and perhaps that was reflected in their 13-3 record. But the Rams had the hardest strength of schedule and saw the biggest growth from one year to the next of any team in the league.

There are simply too many variables for this to mean anything, and that includes injuries, which always occur. It seems as though the Steelers face at least one or two backup quarterbacks every year, and that is probably common for every team.