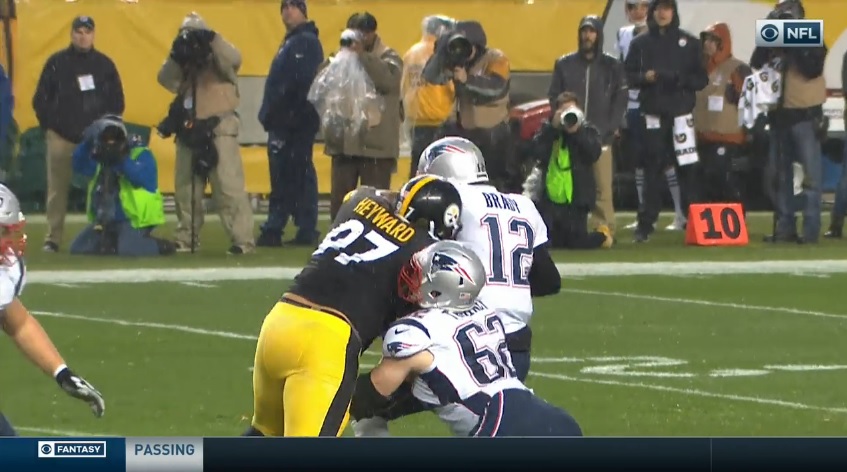 We’ll continue on with this series of posts by looking at and contextualizing the 12 sacks that Steelers defensive end Cameron Heyward registered during the 2017 season.

Heyward’s first sack of the season came against the Cleveland Browns in Week 1 and on a 3rd and very long play in the first quarter. On this sack, the Steelers blitz and in total appear to send six rushers after rookie quarterback DeShone Kizer and that includes safety Mike Mitchell. Heyward crosses the face of the center at the snap and with outside linebacker T.J. Watt also rushing to his left, this gives Mitchell a free lane and a one-on-one with a running back. Mitchell’s penetration forces Kizer to pull the football down and Heyward cleans up the sack after scraping back around to his right.

Heyward’s second sack of the season came in Week 4 against the Baltimore Ravens. On this sack, a low snap to quarterback Joe Flacco is met by a four-man rush that included inside linebacker Ryan Shazier rushing off the edge. Heyward again crosses the face of the center and then beats him around the edge to apply pressure on Flacco along with Shazier. Flacco tries to escape and Heyward is able to track him down for the sack. Flacco really had nowhere to go with the football before the pressure forced him to leave the pocket.

Late in that same game against the Ravens, Heyward notched his third sack of the season. On this 1st and 10 play, both Heyward and fellow defensive end Stephon Tuitt do a great job of winning their individual matchups on the left and both gain access to the B-gap. Flacco considers getting the football out to the left flat but changes his mind and pulls it down. Heyward, who had fell to the ground while rushing, quickly gets to his feet just in time to get a panicking Flacco.

Heyward’s fourth sack of the season didn’t come until Week 7 of the regular season against the Cincinatti Bengals. On this 1st and 10 sack late in the fourth quarter, Heyward has a contain rush on the right side of the defense and he’s being blocked by two Bengals linemen. Inside linebacker Vince Williams, who had blitzed from the opposite B-gap, destroys the running back and that in turn forces quarterback Andy Dalton to take off up the middle. Heyward is able to corral the escaping Dalton for the sack.

Heywards sack against the Detroit Lions in Week 8 was very impressive and featured him bullying the guard on his side all the way back into the lap of quarterback Matthew Stafford. this was a nice one-on-one win on a 3rd and 6 play.

In Week 11 against the Tennessee Titans, Heyward registered two more sacks with his first one coming in the first quarter and on a second and 6 empty backfield dropback. Heyward gets a good jump at the snap and beats the left guard to the outside in order to gain access to the pocket,. Titans quarterback Marcus Mariota tries to escape but Heyward ensures he doesn’t.

Heyward’s second sack against the Titans came in the third quarter and on a third and 4 play deep in the Steelers end of the field. On this play, the Steelers run identical stunts on both sides with outside linebackers looping in behind the edge-rushing defensive tackles. Heyward’s ability to occupy two Titan offensive linemen briefly allows outside linebacker Anthony Chickillo a chance to pressure enough up the middle that results in Mariota escaping to his left. Heyward does a great job of containing the edge while penetrating and his hard work is rewarded with a sack, his seventh one of the season.

Against the Green Bay Packers in Week 8, Heyward once again registered two sacks in a game. His first one came in the third quarter and on a 3rd and long play and was a result of the Steelers front applying nice pressure on the left side. Heyward does a great job of contain rushing on the right and then angling back to the pocket with a nice powerful bull rush. He arrives just in time to get a scrambling Packers quarterback in Brett Hundley.

Heyward’s sack sack against the Packers, his ninth of the season, also came in the third quarter and also on a 3rd and long play. This time, Heyward loops around to the outside after Watt does a great job of splitting the B-gap and tackling the left tackle with him. Heyward powers past the left guard to corral an escaping Hundley once again.

A powerful win to the inside of a left guard in the first quarter of the Steelers Week 15 game against the New England Patriots results in Heyward sacking quarterback Tom Brady fairly quickly. This was one of Heyward’s more impressive sacks of the season.

Heyward’s 11th sack of the season came against the Houston Texans in Week 16. Nice initial pressure on the right side of the defense by Williams forces Texans quarterback T.J. Yates to step outside the pocket to his left. Heyward works off his block and back to his right to corral Yates, who had nowhere to go with the football due to nice coverage in secondary.

Heyward’s 12th and final sack of the season also came against the Texans and this one was in the second quarter and on a 3rd and 5 play. At the snap of the football, the Steelers defense gets great penetration from all four rushers. Heyward is part of that as he walks the center back into the lap of Yates. Heyward disengages from the center in time to get his hands on an escaping Yates. He forces a fumble while sacking Yates and the football is ultimately recovered by outside linebacker Bud Dupree.

Summary: Heyward had a tremendous season as a pass rusher and it resulted in him being named a first-team All-Pro after the season ended even though he was a Pro Bowl snub. Heyward showed great quickness, power, hustle and awareness all season long as a pass rusher and it’s not surprising he registered double-digit sacks.