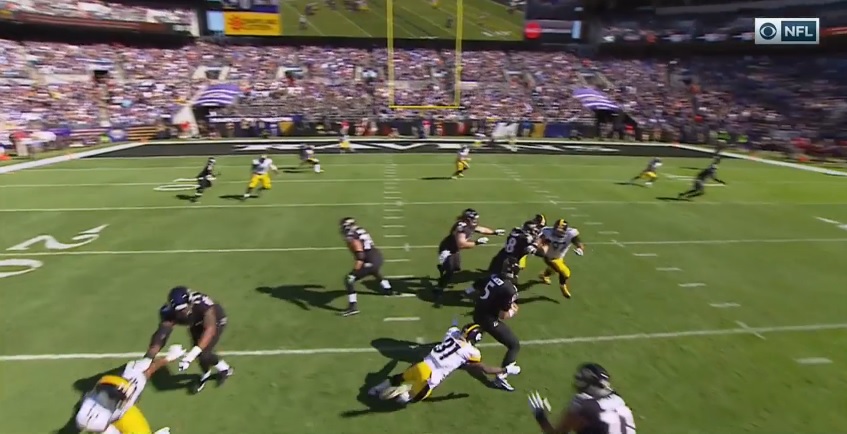 We’ll continue on with this series of posts by looking at and contextualizing the four sacks that Steelers cornerback Mike Hilton registered during the 2017 season.

Hilton’s first sack of the 2017 season came against the Baltimore Ravens in Week 4. On this 3rd down and 10 play inside the Steelers red zone, Hilton is lined up against slot receiver on the left side of the Pittsburgh defense and at the snap of the football he comes off the edge with a nice running start. While Hilton is effectively run up the arc by the much larger Ravens right tackle, he does a great job of getting around him and ultimately works his way back to Baltimore quarterback Joe Flacco for the sack. Truly an effort/coverage sack for Hilton on this play.

Hilton’s second sack of the season came in Week 16 against the Houston Texans and it was the first of three he would ultimately register during the game. On this first one against the Texans, however, Hilton is lined up on the right side of the defense without anybody to cover as a result of him not following a motioning wide receiver to the other side of the formation. This screams that he’s likely coming off the edge and while the Texans running back accounts for Hilton, he doesn’t do a great job of eating up grass to meet the cornerback closer to the line of scrimmage. Hilton attacks the block and then slips inside of the running back to sack Texans quarterback T.J. Yates.

Hilton’s second of three sacks against the Texans came in the second quarter. This time, however, Hilton is matched up with a slot receiver on the right side of the defense. At the snap of the football, Hilton blitzes and the Texans running back on his side chooses to go to the right side of the formation to provide help. Hilton is a free-runner on the play and Yates fails to get the football out to the hot receiver to his left. This was an easy sack for Hilton. Yates fumbled on the play and quickly recovered the football. Additionally, he was injured on the play and needed to be checked for a concussion.

Hilton’s third and final sack against the Texans was also a result of him being a free-runner off the right side of the Steelers defense. This time he easily tracks down Texans quarterback Taylor Heinicke, who had replace the injured Yates.

Summary: While we certainly learned quite a few good things about Hilton during his first season with the Steelers, one of them was definitely the fact that he’s a solid blitzer off the edge. The former undrafted free agent out of Mississippi showed great anticipation and timing quite a bit during the regular season and while he officially had four sacks, he registered several other pressures when coming off the edge as a slot cornerback as well. The fact that he recorded four sacks during the season is quite amazing based solely on the position that he plays. Can he equal that number in 2018? It won’t be surprising if he does. He was a nice find for the Steelers.