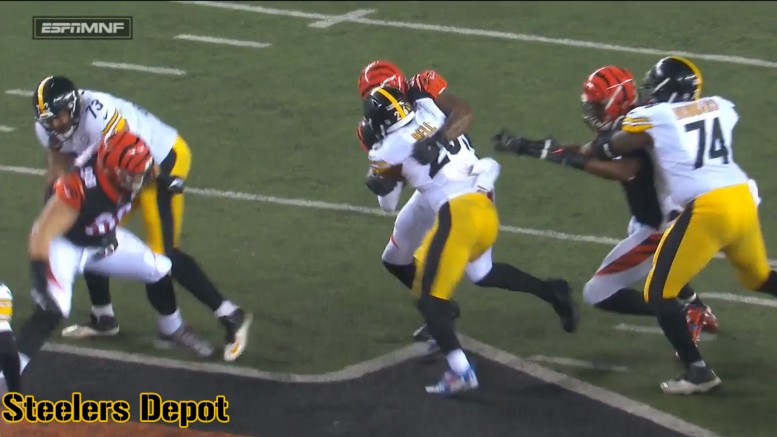 Increasingly, it would seem that more and more people who make their living covering the Pittsburgh Steelers are leaning toward thinking it might be the more prudent move for the team to let running back Le’Veon Bell hit the open market as an unrestricted free agent rather than acquiesce to his contract demands of, presumably, at least $15 million per season in average annual compensation.

Virtually everybody at the Pittsburgh Post-Gazette, for example, seems to be thinking that, are at least leaning in that direction. And if the Steelers do re-sign Bell, Ed Bouchette believes that they should use him less frequently than they have.

“Whether it is James Conner and other backs behind Bell, the Steelers should spell their star”, Bouchette wrote in a recent article. “Provided they have another reliable back, there is nothing wrong with cutting down on Bell’s carries and receptions, especially in games that are out of hand. Granted, the Steelers had few of those in 2017, but they need to find some spots to run someone else”.

According to Bouchette, Conner recorded just 10 percent of the Steelers’ carries up to the point that he was injured last year. Honestly, that even sounds a bit high, but that only further illustrates his point, I suppose.

Nobody, frankly, is used more than Bell. He has been the top player in terms of touches per game for years now, and while he has missed about a season’s worth of games over his five-year career due to injuries and suspensions, nobody can stand toe-to-toe with him when it comes to per-game workload.

Just last season, in fact, the fifth-year running back set a new career-high with 406 touches. That ranks as the 36th-most touches in a single season in NFL history, and he is only one of three currently active players to have a 400-touch season, the others being DeMarco Murray and Chris Johnson. Adrian Peterson and Matt Forte are the only other currently active players in the top 100, and Peterson’s highest touch total in a season was 388.

Bell missed four games in 2016, but still managed 336 touches, ranking 238th all-time, but he averaged 28 touches a game, which, over a full season, would have equaled an eye-popping 448 touches, accounting for the seventh-most of all time.

This is all to illustrate the point that Bell gets worked a lot when he is on the field, though a good percentage of that work is as a pass-catcher. While heavy workloads might not necessarily guarantee injuries, they correlate pretty strongly in a decline in effectiveness.

Of course, the story might change depending on how Bell is signed. If he gets a long-term deal, then sure, you want to take some precautions about long-term protection. But if he plays under the tag and you expect him to leave in free agency the next year, then you might be inclined to get everything you can out of him.