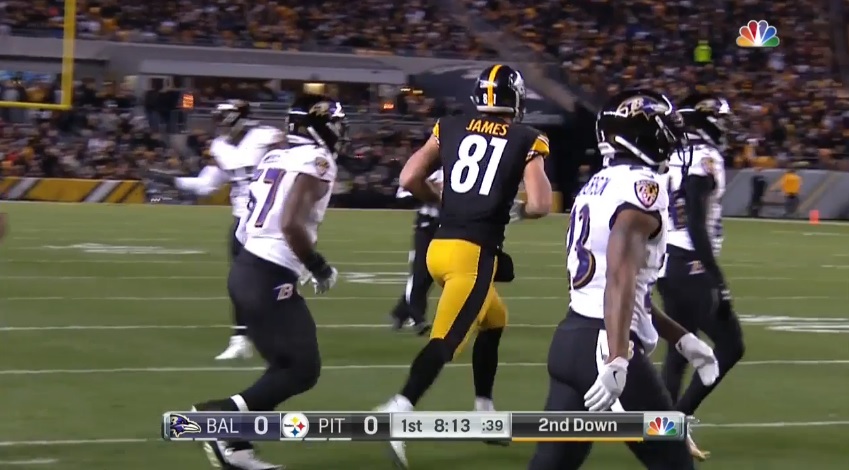 A look at Jesse James season in a nutshell.

I’ve always said the way to define a successful game from Jesse James comes in only three ways. Success in the red zone, success on combative catches, and good blocking. Doesn’t need to be flashy, spectacular, nor do the numbers need to look even remotely good. It’s all about situational play. He had his best game of his career in the biggest one of the season, racking up ten catches in the thrilling win over the Baltimore Ravens. And if it wasn’t for James making crucial grabs in the right situation, it probably wouldn’t have happened.

1:57 remaining. 3rd and 13 on the Steelers own 14. Fail to convert here and you either punt (Pittsburgh had all three TOs) or go for it on 4th and forever. Ben Roethlisberger took his shot, hitting James slightly bending his route to the middle of the field on a seam route. James had to make a slight adjustment and took a big blow from the safety and linebacker piling on. It was tough, it was combative, but he made the play. Drive alive, and the Steelers would go on to kick the game-winning field goal.

Rock solid play, the type Pittsburgh needs from him. Could go down as the best game of his NFL career.

Of course, first and foremost, James is defined by what he does as a blocker. There’s been improvement there but consistency? Sometimes a different story. That’s what happened mid-season against the Indianapolis Colts. Steelers inside the Colts ten, first and goal. James drops his eyes and completely whiffs on blocking OLB Jabaal Sheard, who swims past and tackles Le’Veon Bell at the line of scrimmage.

We highlighted the problems the Steelers had in the red zone all season long and Art Rooney II recently came out and pointed to that being something that needs fixed in 2018. Plays like this are one reason why. Just poor execution.