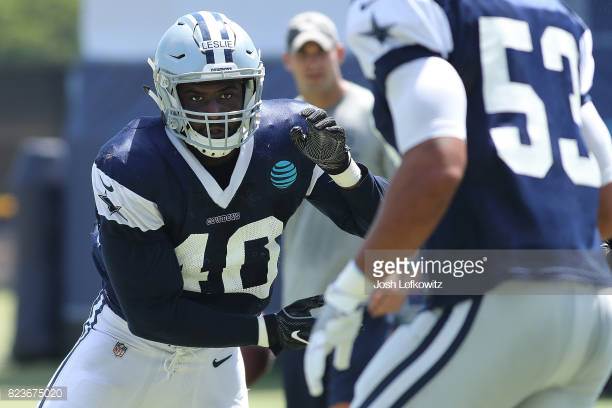 When the Steelers have sought out OLBs in recent years, they’ve gone for size. Dudes who look the part getting off the bus. Leslie might not fit that mold at 6’1 230 but heck, maybe that’s not a bad thing. Some of the team’s top pass rushers of the past weren’t the most hulking dudes.

If there’s one thing Leslie was asked to excel at, it was to get in the backfield. Injuries slowed him down but at three seasons with Monmouth, he racked up 36 TFL and 15 sacks. In 2013, he burst onto the scene with 13.5 TFL and 7.5 sacks along with an interception for good measure.

That breakout season led to more attention from opposing offenses and his numbers dipped the following year. Heading into his junior season in 2015, he was hoping to bounce back and get on the NFL radar (that’s when that process begins). But Leslie suffered a Jones fracture, a foot/toe injury, that robbed him of the entire year. He recovered to play in every game of 2016, though you have to wonder if he was still feeling the affects of the injury. He ended the season with 10 TFL and 3 sacks, though he racked up a team-high 72 tackles, still making his presence felt.

His Pro Day certainly showcased some interesting numbers. 40.5 inch vertical. 11’1″ broad. And a 7.05 three cone. That’ll grab the attention of the NFL. But with only three years of tape and production that faded, he didn’t secure a contract after the draft.

Instead, he participated in two rookie minicamps as a tryout. The guys with the longest of odds. First with Tampa Bay and then with Dallas. In the latter, he earned a rare contract, evidently impressing the coaching staff enough to compel them to make a move.

At the time, here’s what Cowboys’ writer Bryan Broaddus wrote after watching Leslie in rookie minicamp.

“As a rusher, I like the way he was able to attack the pocket. He was especially hard to block when he was on the move, and he was really good when used on those twist stunts. Watching the tape, he just had a feel for how to rush the passer. He did a nice job of fighting down the line to get to the ball. There were only two times where he was fooled badly on the read-option and looked bad.”

Natural pass rushers are something the Steelers could certainly use.

Leslie lasted the entire camp in Dallas before getting his pink slip at final cutdowns, recording three tackles. He wasn’t signed to the team’s practice squad. The only other football action he got last season was a two week stint in the CFL, scooped up by the BC Lions in mid-October. The same team who, by the way, rosters ex-Steeler Chris Rainey, who is doing very well up north. Leslie didn’t appear in any game action.

Now he is in Pittsburgh. As we mentioned last month, the Steelers are hoping to get something out of Keion Adams and Farrington Huguenin, even if all that is would be some depth and guys who can push everyone else. It’s hard to say if Leslie should be on that list too because we haven’t seen him take a snap in a Steelers’ uniform. He did remark that at Monmouth, he occasionally dropped into coverage and he certainly did so in Dallas, so he should be relatively refined.

Signing him is hoping some of those old numbers pop up. The eye-catching workout figures. The 7.5 sacks from his redshirt freshmen season. A little bit of magic needs to be captured for him to stick around.