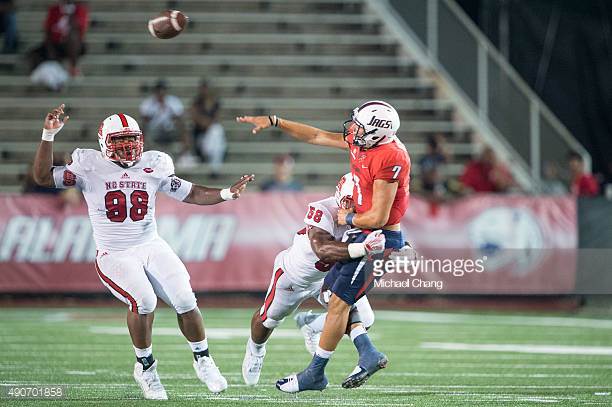 –Played running back/defensive end and baseball in high school.
–As a high school senior had 68 solo tackles, 9 sacks, and 1 interception along with 118 rushes for 819 yards and 5 touchdowns.
–Won a team award every year at NC State.
–Finished his college career with 183 tackles (76 solos), 8 sacks, 1 interception, 9 passes defended, 2 fumble recoveries, and 2 forced fumbles.
–2018 Senior Bowl participant who generated buzz in Mobile

The defender lines up on the outside shade of the right guard. At the snap, Hill crosses quickly, getting his arms fully extended, perhaps getting too high out of his stance too soon, but ends up engaging the guard and center. Knowing he will not reach the quarterback, #98 watches the windup and times his jump while jetting his arm up to tip the pass, causing it to fall to the ground. This shows off his athleticism and his issues staying low.

This time Hill is kicked out facing the right tackle. #98 gets good penetration at the snap, engaging the blocker with his hands up, but looks to have found a dance partner. The defender needs master a rip/dip/bull rush/spin or something to consistently free himself. All the Panther lineman has to do is keep him near and it takes the Wolfpack member out of the play. While his athleticism is impressive, Hill needs technique to improve his ability to make an impact.

Shading the center in his stance, the defender comes across the line of scrimmage hot, but also too high. This allows the left guard to swallow the Wolfpack defensive lineman up; this causes Hill to play patty cake until the ball gets released. It is obvious that #98 doesn’t have the lower body strength to compete with the Arizona State mauling o-lineman. This shows that Hill might be better suited to play a 3-tech on a 4-3 defense.

Lined up across from the left guard, #98 screams past the line with a rarely seen spin move that clears him of the Cardinal o-lineman’s gasp. Although Hill doesn’t reach the athletic Lamar Jackson; the defender forces a quick ill-advised throw that is not completed. If this young man could perfect the uses of two moves: a spin, rip and dip, or bull rush, his ability to be productive at the next level would greatly improve.

While I believe Hill is an athletic marvel, his lack of college production, and mostly straight ahead rushing technique do not make him a match in Pittsburgh with their nose guard position. His inability to deal with double teams and tendency of getting too high out of his stance would cause the rest of a 3-4 defense to work inefficiently. If the presence of Bradley Chubb, a consensus top five pick, could not free the Wolfpack interior defender, Hill would be in trouble with Heyward and Tuitt manning the edges.