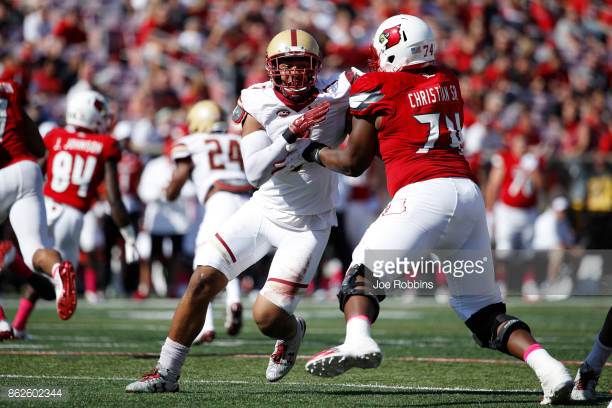 Landry, 6’3 250, was limited by injury his senior year, finishing with only five sacks and 8.5 TFL. He exploded in 2016, racking up 16.5 sacks with 22 TFL and billed as a top ten pick. His also pulled out of a Senior Bowl invite due to an ankle injury so there are some concerns there.

In their write-up, Drafttek says:

“Value at the end of the first doesn’t get much better than Harold Landry. The 2016 FBS leader in sacks (16) returned to BC for his senior season. While injuries and game-planning by opponents kept him from gaudy numbers, Landry was productive in 2017, particularly in big games. In his two games versus ranked opponents, Landry tallied 15 tackles and 3 sacks.”

Their assessment of the position is pretty accurate for “big media,” going on to write, ” A re-scouting of [Jarvis Jones] will show that the Bulldogs schemed and moved him around to be in position to make the big plays. BC did no such favors for Landry. He lines up at RDE and gets to the passer with great athleticism and bend around the edge.”

In the second round, they go a little more conventional, selecting Alabama safety Ronnie Harrison with pick 60. Harrison has been mocked in the first round of some drafts and though taking a player from Bama hasn’t happened under Kevin Colbert, the fit makes sense.

Harrison is a big safety at 6-3 with great athletic skill and a reputation for tough and productive play (74 Tackles in 2017). He’s shown some proven ability to neutralize some “matchup nightmare” tight ends in college,” the site writes.

The third round gets a little weird, selecting Clemson’s Dorian O’Daniel, who they list as an OLB. He certainly won’t play there in the Steelers 3-4 scheme and kicking him inside is a tough fit at 215 pounds.

In the fifth, Pittsburgh takes NT Kevin Norton from Miami (FL). He made 84 career tackles, 18 for a loss. And in the seventh, there’s TE Durham Smythe, a personal favorite of mine.

The only thing they seem to have off the mark is a couple of missed picks in the Steelers’ draft order. There’s two in the fifth and a pair in the seventh. Looking beyond that, to be honest, it’s a really solid mock draft, especially if we accept O’Daniel as an inside linebacker. Well-researched and done by Drafttek. It’s a whole lot better than this mock that had the Steelers take an offensive tackle in the first round.