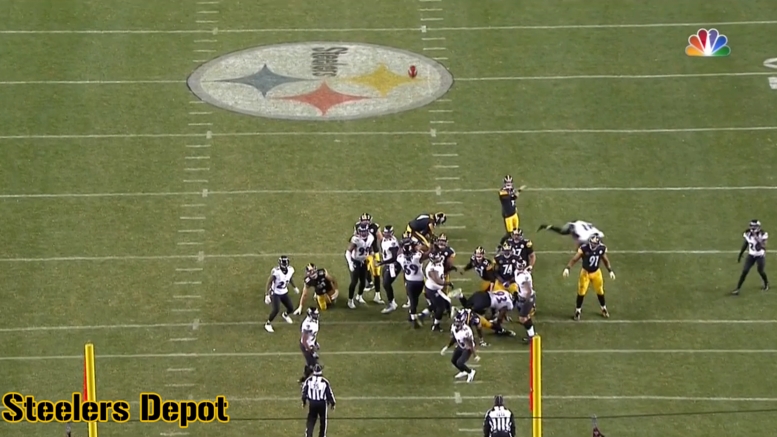 There are a number of games this past season in which the Steelers struggled to play at their best to open the game. This was yet another one of them, and the second matchup with the Bengals began with a Ben Roethlisberger interception on third down.

That was the final play of the season for Adam Jones, however, the Bengals’ cornerback, who was injured on the play. An unnecessary roughness penalty on Le’Veon Bell gave Cincinnati the ball on the Steelers’ 44, and they quickly converted that interception into a field goal.

Pittsburgh’s second effort of the day did get into Bengals territory, but they ended up punting, and Andy Dalton mixed in with the running of Joe Mixon saw them drive 85 yards for a touchdown. A.J. Green beat Coty Sensabaugh, starting for Joe Haden, for an eight-yard score.

That would be a theme. Late in the half, Green would be Sensabaugh again for yet another touchdown, this time from 15 yards, after an even longer drive that featured Giovani Bernard as the running back of record. The cornerback was benched for rookie Cameron Sutton in the second half.

The Steelers were able to get on the board as time expired at the end of the second quarter with a field goal, but they had a deep hole to dig out of, down by two touchdowns. The defense was able to force a three-and-out to open the second half, though, and Bell and Roethlisberger set to work. The drive ended with a 35-yard touchdown catch-and-run from Bell.

The Bengals did respond to make it a two-possession game again, at the time a 20-10 game, but that would be all the scoring they had left in them against the Steelers. It would be a grind, but the Steelers would end up putting up 20 points in the second half in total.

With eight minutes to play, it was almost all Roethlisberger throwing the ball around. After an early break on a roughing the passer call, he connected with Bell, Antonio Brown, and JuJu Smith-Schuster, with Jesse James setting up first and goal with a 13-yard catch. Then it was Ben to Brown for seven.

And surprise, surprise, it would come down to Chris Boswell yet again, for the fourth time in five games. With under four minutes to play, it was Bud Dupree with the sack of Dalton on third down to force a three and out.

Roethlisberger got the ball back with 2:42 to play at the Steelers’ 41-yard line. They managed to use all of the clock, even with two Bengals timeouts, to win the game, hitting from 38 yards and yet another game winner. It was the Steelers’ seventh win in a row, tying for their longest winning streak since 2004.