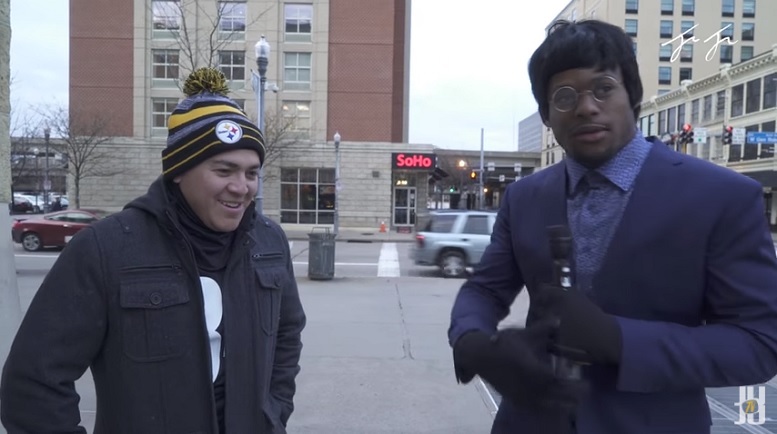 While he’s only a rookie, Pittsburgh Steelers wide receiver JuJu Smith-Schuster has already proven to be not only one of the NFL’s most entertaining players on the field, but off of it as well. Additionally, the Steelers second-round draft pick has already done a great job of establishing himself as a brand, which is something that fellow wide receiver Antonio Brown took several years to do.

On Friday, Smith-Shuster posted an entertaining video on his YouTube channel of himself disguised as a Pittsburgh news reporter while interviewing fans of the Steelers on the streets of the city. The video was shot prior to the Steelers Week 14 game against the Baltimore Ravens and just after the team’s Week 13 Monday night home win over the Cincinnati Bengals, a game that featured Smith-Schuster delivering a vicious block on linebacker Vontaze Burfict that he was ultimately suspended one game for.

During his encounter with a few fans of the Steelers, Smith-Schuster proceeds to ask them about that block on Burfict, among other things. He also is forced to talk briefly about the Pittsburgh Penguins as well. It wont be too much longer until Smith-Schuster is unable to walk the streets of Pittsburgh unnoticed and even if he’s wearing a disguise.

You can watch the video below and it’s a great way to start winding down your Friday and as the Steelers wide receiver likes to say, it’s lit. I’ve also included another video below that of Smith-Schuster attempting to hitchhike.