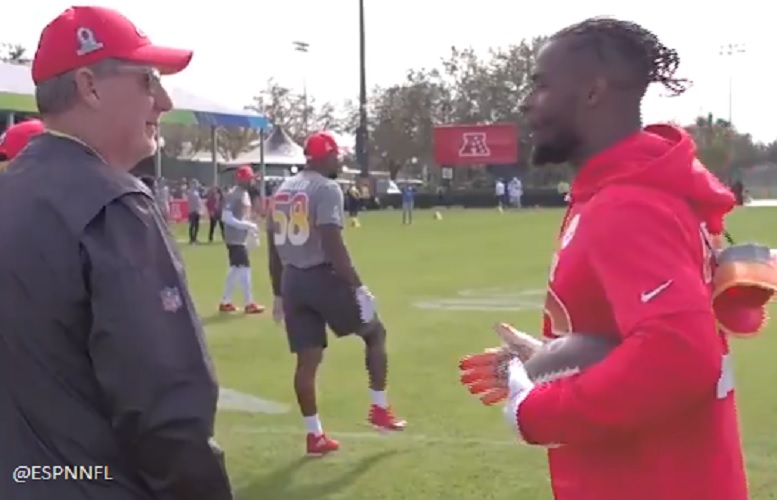 This year’s Pro Bowl will be full of Pittsburgh Steelers players. Also, as is usually the case, we’re likely to see a few uncommon things take place during the annual NFL All-Star game and that includes a few trick plays as well as players possibly playing out of position. Will Steelers running back Le’Veon Bell ultimately fit into the latter of those two categories? It certainly appears as though he’s lobbying for that to happen.

In a video clip from ESPN that was posted on Twitter Friday morning, Bell can be seen and heard lobbying Steelers defensive coordinator Keith Butler to let him play as an in-the-box safety during Sunday’s Pro Bowl game in Orlando, FL.

“Hey ‘Buts’, if you need like an extra like safety – in-the-box safety – listen to me, listen to me,” Bell pleads to Butler. “I understand they’re Pro Bowlers, you’ve got a couple of first-team All Pros and things like that (at safety), but you’ve got to understand…you ain’t never seen me play (safety).”

When Butler ask Bell if he can play linebacker, the running back quickly turns that offer down.

Bell, to his credit, did play safety in addition to running back at Groveport Madison High School in Columbus, Ohio. He was also reportedly recruited as a safety a little bit by both Ohio State and West Virginia before ultimately landing at Michigan State as a running back.

So, will we actually get a chance to see Bell play some safety in Sunday’s Pro Bowl game? I doubt it, but stranger things have happened.