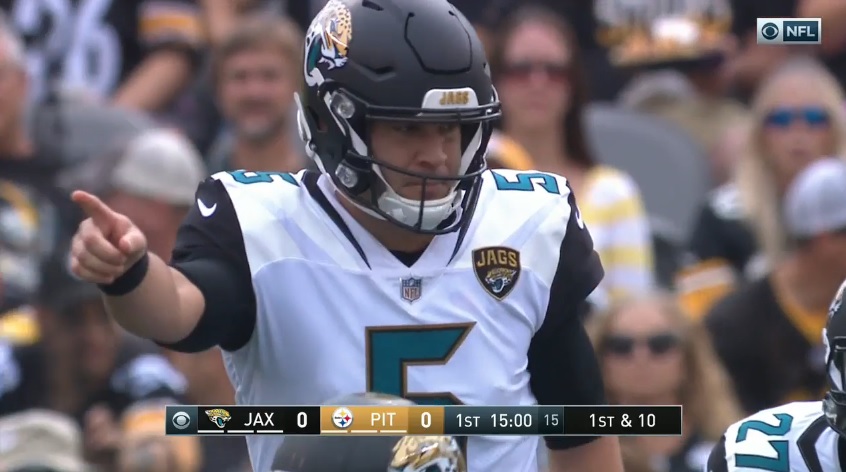 All it took was 14 passes for the Jacksonville Jaguars to beat the Pittsburgh Steelers in Week 5. He can thank a dominant defense that picked Ben Roethlisberger off five times, returning two for touchdowns, and holding a second half lead for the majority of the time.

That’s what he said, via the AP’s Mark Long.

Jaguars QB Blake Bortles on throwing 14 passes in win at Pitt in Week 5: “Hopefully we can throw less,” adding he wants Fournette to go off vs Steelers

The statement shouldn’t serve as much of a shock. It’s no secret the Jaguars’ gameplan is to run the ball like crazy and control the clock, staying true to what’s done well for them to get into the playoffs and through the first round of postseason play.

Still, it’s funny to imagine a quarterback shooting for throwing under 14 times, especially in this era where passing is as popular as ever.

The Steelers’ defense knows what they have to do to win. Shut Leonard Fournette and that run game down. Sure, Fournette has admitted he hates cold weather games but one of his best performances of the season came in the week after making those comments, rushing for well over 100 yards against a very good Cleveland Browns’ defense. Pittsburgh has to slow him down, not bank on the weather.

That’s something they did moderately well in the first matchup. Before his final 90 yard dash when the game was over, they held Fournette in check. He has slowed down in his rookie season, perhaps hitting the rookie wall, and isn’t making many people miss. But the Jaguars have a physical starting five and a varied run game, using every scheme under the sun to find daylight.

And when Jacksonville does throw? Expect a healthy dose of playaction over the middle. That was most effective against the Buffalo Bills and I don’t see the Jags changing their stripes anytime soon.

And if Bortles throws the ball under 15 times? That means something went wrong for the Steelers – and their Super Bowl chances.