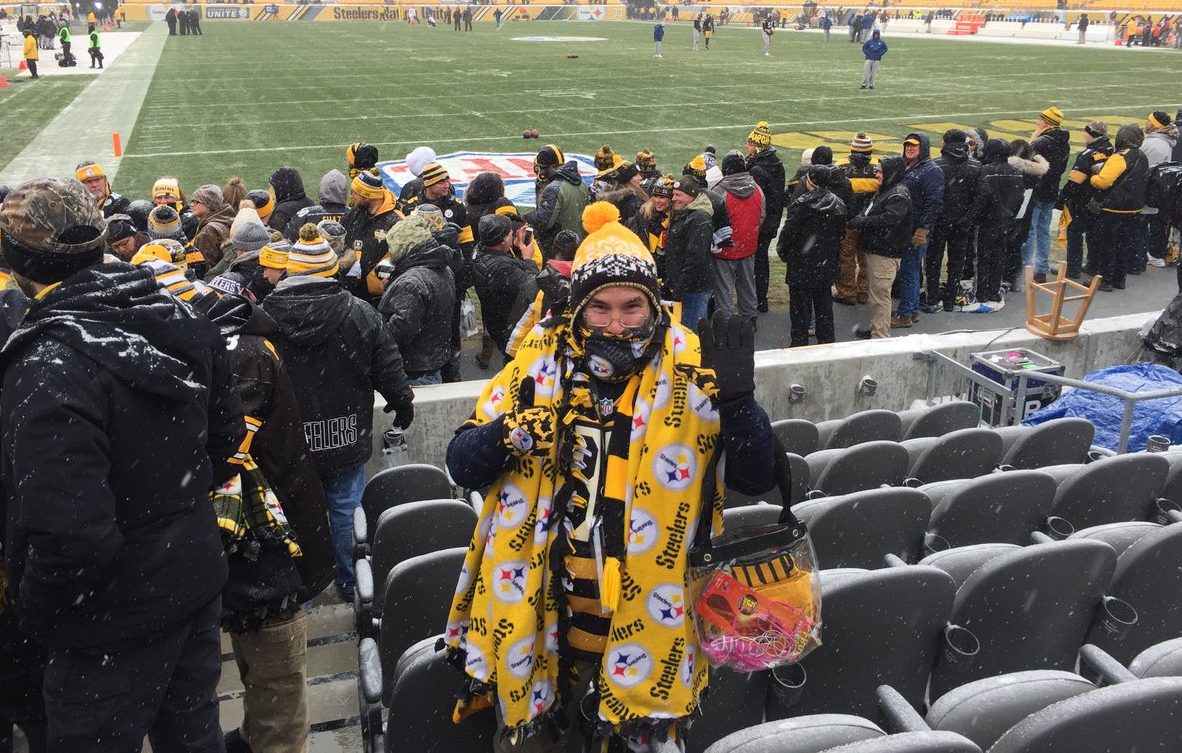 2018 has arrived. Hope everyone who contributes to Steelers Depot whether writers; readers or commenters prosper; enjoy the things you do; the places you go; and especially the people you meet during the year. Be thankful for the folks that lend a helping hand or do something positive in your life. Here we go!

In the end, winning or losing this last regular season game would not matter as the NFL Patriots defeated the New York Jets and locked up home field advantage should they win in the Divisional round. Many fans believed that the Pittsburgh Steelers should at least start the game with their stars and then watch the scoreboard to determine how long they should play.

Mike Tomlin early on determined that Ben Roethlisberger, Le’Veon Bell, Dave DeCastro, Can Heyward & Maurkice Pouncey would not against the Cleveland Browns. It was a poorly kept secret if it ever was. Cleveland was trying to avoid being 0-16. Fans in Pittsburgh gave their own version of seasons greetings to the visitors: 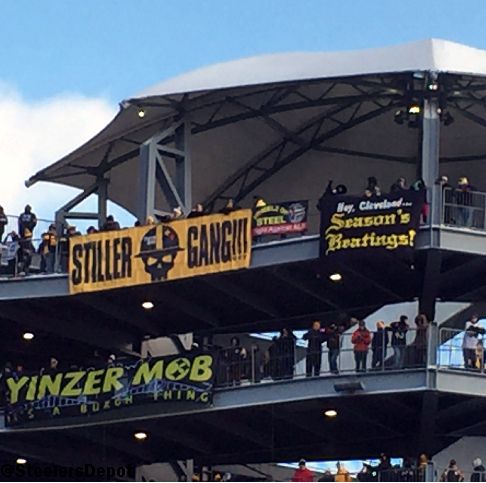 Rust or rest has been a refrain on twitter feeds among Steelers fans. We’ll have to wait a couple more weeks to see how Ben Roethlisberger, Cam Heyward and the others who were rested perform. The important thing is that all should be very healthy. With Antonio Brown working hard to rehabilitate his calf; the main missing piece is Ryan Shazier.

The only apparent significant injury in this game was B.J. Finney who injured his thigh. I am pretty sure he first hurt it on the third drive of the game when the Browns held the Steelers out of the end zone on 4th and goal. He was visibly limping as he came off the field. Finney played ten more snaps but was pulling to the right when he was shoved down and finally walked off the field under his own power but in a lot of pain.

Landry Jones came out passing and looked sharp to me. Even after Chris Hubbard replaced Finney at center and had at least three bad snaps; Jones kept his composure. Hubbard must have had a different spin on his ball since Jones seemed to have difficulty handling the shotgun snaps but continued to make completions. He even had a small fan club that had traveled from Artesia, New Mexico to cheer him on. 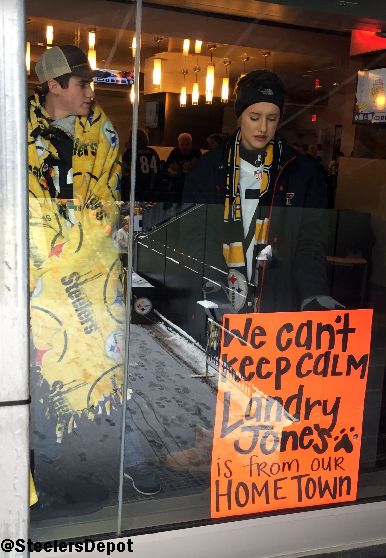 We also got to see a new tandem of running backs as both Stevan Ridley and Fitzgerald Toussaint had some nice runs. Ridley was not targeted in the passing game, but Fitz did have two receptions. Not sure if they were called upon for pass protection but both showed some elusiveness. Plus, Toussaint was back for kickoffs mostly with JuJu Smith-Schuster but also at least once with Martavis Bryant. It seems that several players were auditioned for different roles – just in case they are needed later.

While JuJu got the lion’s share of targets with 10. Martavis did catch 6 of 7 balls thrown his way. Landry Jones threw the ball to eight different players who got at least one catch. The offensive line did a credible job given the jumbled line up. Matt Feiler played 100% of the offensive snaps in his first career start. Three sacks were given up, but these were mainly due to Chris Hubbard forced into duty as a snapper. A few times; especially on the first & goal series where they failed to score on four straight runs – three from the one-yard line was frustrating that they did not surge.

As for the defense; feast or famine. Six sacks a fumble recovery and an interception – with almost two more. More! Cleveland running backs Isaiah Crowell & Duke Johnson limited to 41 yards on 21 carries. Bravo! Deshone Kizer outgaining both with 61 yards on six carries. Less! Rashard Higgins, Josh Gordon, David Njoku & Duke Johnson having receptions of 56, 54, 34 & 30 respectively. BOOO. T.J. Watt is good in coverage but trying to defend a wide receiver s not something I’d like to see Pittsburgh do habitually. Bud Dupree seemed very quiet; the times I noticed him was with Kizer eluding him for first downs. At times, I thought Kizer had greased pants on the way he slipped through tackles. That said, he has some horrible passes. His best passes seemed to happen when there was not pressure.

The Browns stayed in this game against a defense that was mostly the first team except for Cam Heyward. Kizer is a rookie quarterback trying to figure things out. I’m just an average fan so don’t know whether the problem with the pass defense is scheme; execution or a combination of both. Regardless, it needs fixing quick cause better quarterbacks are on the horizon and this rookie just laid up 314 passing yards on them. Tyson Alualu is a potential beast. Mike Hilton was giving them fits. Vince Williams was laying on hits. I’m not sure that this was one of Joe Haden’s better games – though he almost had a pick.

The defense stepped up and helped win some games this year. Hope they can help win three more. The offense struggled early this year but even with Ben resting; they have a lot of weapons. Nice to see Vance McDonald splitting time with Jesse James. He can block and catch though one pass caromed off his fingertips.

It is going to take something special each game. In this game; it was JuJu responding to the Browns tying the game by taking the ensuing kickoff to the house. I had almost a straight on view of the run; one guy to beat and he would not be denied. I also had a great view of his catch against Jason McCourty. I swear he was wrapped up before the ball got there but incredible concentration & determination to keep the ball in his hands. 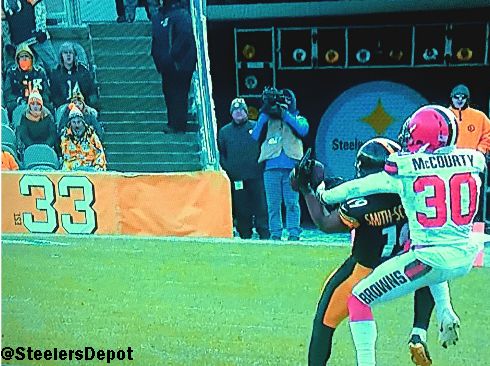 Some would say this game was meaningless since the Patriots won. Maybe in terms of the playoff picture that is true. But, I liked that Landry got a chance to perform; we proved to have stronger running backs behind Le’Veon Bell. The tight ends are better. The wide receivers are a much stronger group than this time last year. The offensive line proved that it can manage even with people playing out of position.

The defense is a bit different. While the defensive line and the secondary is stronger than last year (even with Ross Cockrell getting three interceptions for the Giants) – the linebackers have taken a step back with the loss of Ryan Shazier and the depth is shallower with the loss of James Harrison (who got two last minutes sacks & a forced fumble against the Jets).

In this game against the Browns; Steelers fans learned to love the one you’re were with. Going on into the playoffs; the Steelers roster has had a couple changes. The main guns are coming back for the Divisional Round. These are the guys that the Steelers fortunes are pinned on. Here we go!