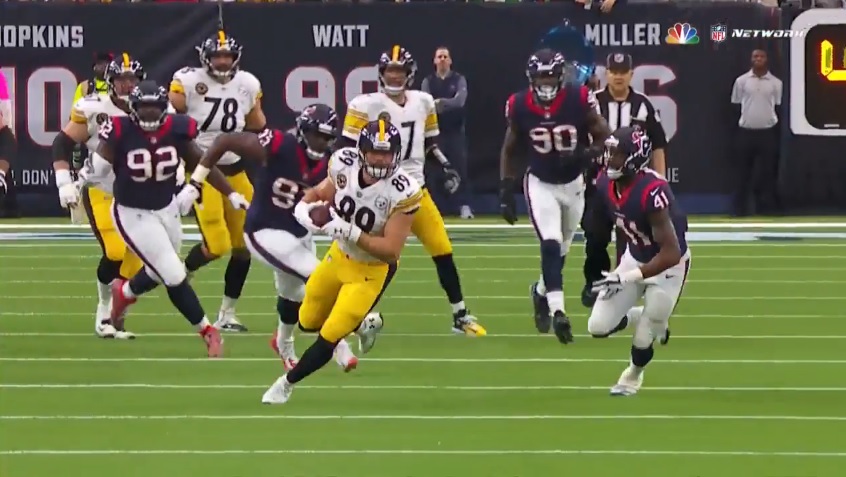 When the Pittsburgh Steelers acquired tight end Vance McDonald via a trade with the San Francisco 49ers prior to the start of the 2017 regular season it was easy to get a little excited about his potential in the offense and his upside. Sure, McDonald had some drops and injury concerns during his time in San Francisco, but when healthy, he was a productive player. As things have turned out, however, the Steelers really haven’t gotten a great return on their investment with McDonald. With that said, there’s still time for him to change that narrative.

Back, knee, ankle and shoulder injuries resulted in McDonald missing 6 games this season and him ultimately playing all of 270 offensive snaps. The Rice product registered just 14 receptions for 188 yards and a touchdown during the regular season. It is worth noting, however, that while McDonald did have 3 drops early during the season, he proved to be a more than adequate run blocker on offense.

To put McDonald’s tangible stats and snaps played into some sort of perspective, last season tight end Ladarius Green played 140 offensive snaps for the Steelers in the 6 games that he dressed for and registered 18 receptions for 304 yards and a touchdown. Green, however, wasn’t half the blocker for the Steelers that McDonald has proven to be. Additionally, McDonald only required a total salary this season of a little more than $2.5 million while last year the Steelers paid Green $6 million.

The good news moving forward from here is that McDonald is now fully healthy and slated to contribute in the playoffs as opposed to last year with Green, who never played a snap during the Steelers three-game postseason run.

McDonald is set to earn a base salary of $3.7 million in 2018 and that amount will reportedly be fully guaranteed if he’s still on the roster come April 1. In short, that base salary along with his other minor roster and workout bonuses might be a little too pricey for the Steelers based on his current production this season.

McDonald still potentially has some time to prove that he’s worthy of being kept around next season and that time starts Sunday at Heinz Field against the Jacksonville Jaguars. The Steelers figure to use a lot of two tight end personnel groupings against the Jaguars so in addition to him proving his mettle more as a run blocker on Sunday, McDonald should also get a few chances to make some plays down the field as a pass catcher as well. McDonald, by the way, only played 15 offensive snaps in the Steelers Week 5 home loss to the Jaguars. He was targeted twice in that game with one of those passes from quarterback Ben Roethlisberger being intercepted. The other pass in his direction was deflected away by an underneath linebacker.

Assuming the Steelers can beat the Jaguars on Sunday and advance to the AFC Championship game, they’ll likely play the New England Patriots once again and that’s another potentially favorable matchup for McDonald, who missed the Week 15 game against them due to a shoulder injury.

In closing, when the Steelers acquired McDonald from the 49ers they envisioned themselves getting a tight end that could serve as a serious downfield receiving threat in addition to one that could block effectively. So far, however, all they have gotten from McDonald is mainly the latter and really not enough of it. If McDonald wants to stay in Pittsburgh past this year’s playoffs, he needs to start making an impact as a receiving threat starting Sunday against the Jaguars.