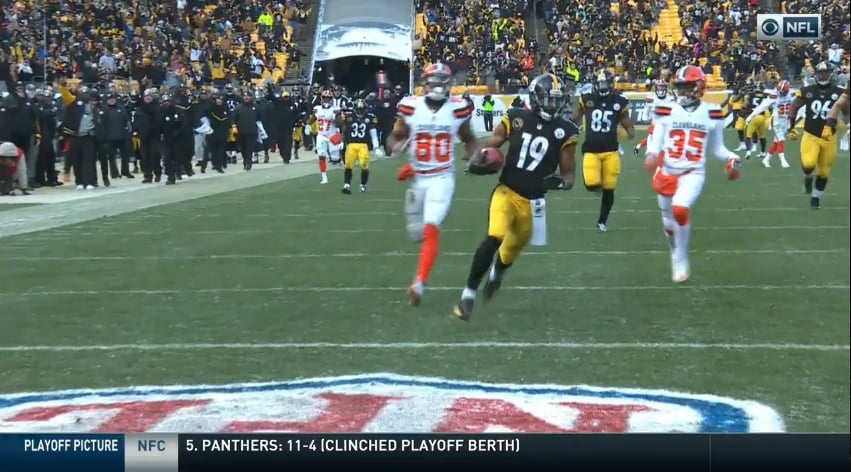 Pittsburgh Steelers wide receiver JuJu Smith-Schuster had quite a rookie season and he has now capped it off by being named the AFC Special Teams Player of the Week for Week 17.

JuJu Smith-Schuster has been named AFC Special Teams Player of the Week.

Smith-Schuster, who caught 9 passes for 143 yards and a touchdown in the Steelers Sunday home regular season finale against the Cleveland Browns, also returned a kickoff 96 yards for a touchdown in the 28-24 win. His return came with 10:42 left in the third quarter following a Browns touchdown that tied the game at 21. The USC product and second-round draft pick this year also returned another kickoff in Sunday’s game for 26 yards.

Smith-Schuster’s touchdown return was the Steelers first on a kickoff since 2010 when wide receiver Antonio Brown returned one 89 yards against the Tennessee Titans.

Smith-Schuster, who was named the Steelers rookie of the year for 2017 a few weeks ago, was also named AFC Offensive Player of the Week earlier this year for his Week 8 performance against the Detroit Lions.

JuJu Smith-Schuster is the 1st rookie in Steelers history to win Player of the Week Awards for both Offense & Special Teams pic.twitter.com/FEBG6BxRD2