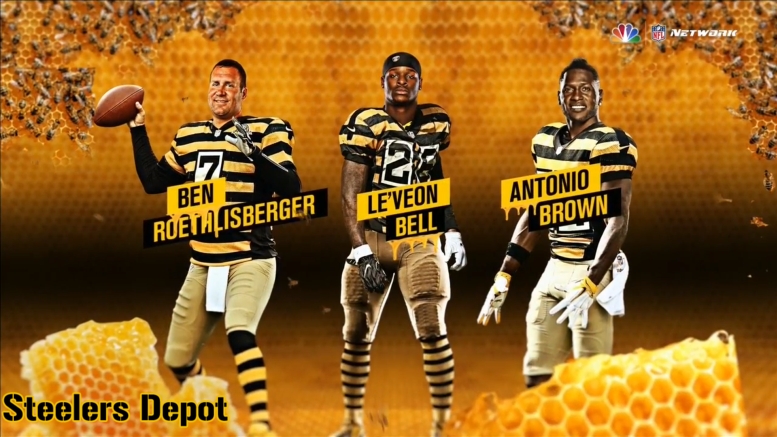 The 2017 regular season wrapped up yesterday with the Pittsburgh Steelers finishing 13-3 and 6-0 in the division. It is difficult to pick only a few winners and losers for the entire season, but here are the individuals/groups who stood out to me week in and week out.

The 2nd round draft pick shined this season. Smith-Schuster broke the rookie receiving record yesterday against the Cleveland Browns. His 917 receiving yards and 7 touchdowns were both second on the team behind Antonio Brown. Martavis Bryant was expected to be the No. 2 wide receiver this year, but Smith-Schuster had different plans. The rookie sensation capped off his great season with a kick return for a touchdown against the Browns. It was the first Steelers kick return for a touchdown since Antonio Brown did it in his rookie year.

Three Pro Bowlers in center Maurkice Pouncey, left guard David DeCastro, and left tackle Alejandro Villanueva, plus consistent and terrific play from, right guard Ramon Foster and right tackle Marcus Gilbert led to only 24 sacks allowed. They also have completely adjusted to Le’Veon Bell‘s style of play and have done an unbelievable job opening up holes for him. Chris Hubbard played extremely well for Gilbert when he was out for his suspension, too. The only negatives with this group were Hubbard’s center play against the Browns (granted, it was a tough situation to be in) and Gilbert’s suspension. If Big Ben decides to play another year, it may well be because this group did such an awesome job at protecting him and keeping him healthy.

Arguably the biggest Pro Bowl snub in the league, Heyward came back this season after last year’s season ending chest injury. Heyward returned to the lineup this year as if he never left after the injury. His 12 sacks and 2 forced fumbles led the Steelers defense in 2017.  Aside from Ryan Shazier, the defense has relied on Heyward all season. He has been an animal on the line and often made big plays in big moments. When Heyward plays well (which has been all season), the Steelers defense excels.

Hilton was undrafted in 2016 and bounced around, spending time with both the New England Patriots and Jacksonville Jaguars. Hilton was signed onto the Steelers practice squad last December and has made the most of his opportunity. Hilton’s ability to constantly be in the right place at the right time made him one of the nicest surprises of the regular season. His 2 interceptions were second on the team behind Shazier.

What more can anyone say about this group? Ben Roethlisberger, Antonio Brown, Le’Veon Bell, and yes, Chris Boswell won the Steelers more than just a couple games this season. All Pro Bowlers, the four constantly played up to their potential and will be an extremely dangerous group come the playoffs in a couple weeks. Big Ben has been wonderful the latter half of the season, while Brown, Bell and Boswell were consistent and fun to watch throughout. I can’t remember the last time I was extremely confident in a Steelers’ kicker. Roethlisberger’s game against Jacksonville and Brown’s injury are the only major negatives coming from this group.

With Lawrence Timmons gone, Williams gained a much bigger role in 2017. His 8 sacks and 89 total tackles are a testament to how fast and hard Williams played. In case you were wondering, Timmons never had more than 7 sacks as a Steeler. Williams became one of the most important leaders on defense and his role increased even more after the Shazier injury. His versatility and football IQ shined as he played fabulous in his first full season as a starter.

56 sacks. That is good for the most in franchise history. Butler drew up several different blitz packages that had opposing offenses confused. The most exciting just may have been the nickel blitzes designed for Hilton in his 3-sack game against the Houston Texans. Pressure leads to quarterbacks making mistakes and that leads to turnovers, as we saw most recently in the regular season finale against the Browns. The Steelers defense has plenty of playmakers and Butler seems to understand who is good where and when.

Bryant received plenty of hype heading into the 2017 regular season. He has come along the last couple of weeks, but his social media drama midseason puts him as a loser. He has the talent to possibly be a No. 1 receiver in the NFL, but his attitude was far from professional. Bryant seemed intimidated by the competition with Smith-Schuster. Instead of taking advantage of the opportunity to get better from it, he sulked. Hopefully Bryant can help the Steelers in the playoffs as he has played better the last few weeks. But with his skill set and dissatisfaction with his role this year, we may see Bryant wearing another uniform come next season.

Rogers only managed 18 catches for 149 yards on the season. With JuJu’s brilliance and Bryant coming back from suspension, Rogers saw his opportunities dwindle. Last season, Rogers had 48 receptions for 594 yards. His role diminished and he was not effective enough as a route runner to increase his meaning to the team this year.

With the addition of Joe Haden and emergence of Hilton and rookie, Cameron Sutton (towards the end of the season), Burns saw his role change from what we originally envisioned for Burns. He was called for pass interference five times, including a crucial penalty against the Patriots. As exciting and impressive as his rookie season was in 2016, his campaign this year was, quite frankly, lackluster. He has been extremely inconsistent in coverage and has gotten beat too many times. Burns will now have to play well in the playoffs to be considered one of the Steelers top cornerbacks heading into the offseason.

Inconsistency is the best word to describe Dupree’s 2017 season. Having six sacks is decent, but only 40 total tackles as a linebacker is concerning. Dupree should be an beast against the run and set the edge. His pass rushing also solely came in spurts as he never went two games in a row with a sack. It was nice to see him stay healthy this year, but I would love to see him develop into a 10 sack, 4 forced fumbles kind of guy. That’s what we all expected from him coming out of Kentucky and that’s what he needs to work to get to.

The Steelers led the NFL with 13 unnecessary roughness penalties. It is hard to look back and fret about a stat like that given the 13-3 record, but one bonehead decision could cost the Steelers a playoff game. Just look at what happened to the Cincinnati Bengals against the Steelers in the 2015-’16 season’s Wild Card game. A lack in discipline was exactly why the Steelers were able to squeeze out an 18-16 win in that game. A team can’t beat itself come playoff time and lapses in discipline would lead to exactly that.