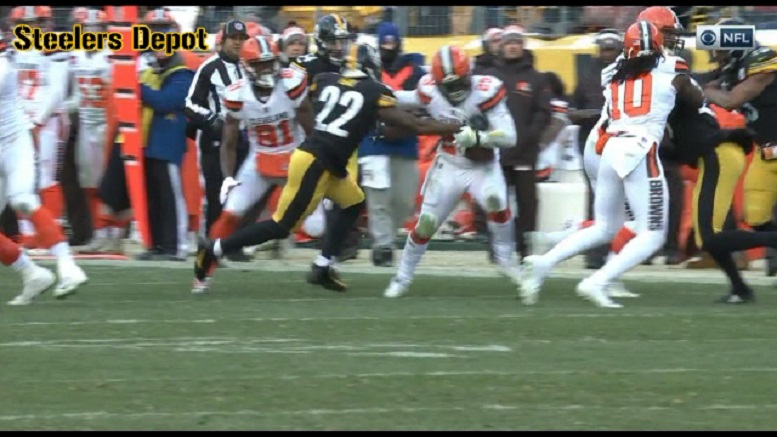 The first of the turnovers would take us to a 3rd and 15 with 12 and a half minutes left in the game.  Browns quarterback Deshone Kizer would hit running back Duke Johnson Jr. on a perfectly timed screen pass with a lot of open field in front of him.  Johnson would get 30 yards downfield before Steelers cornerback William Gay would catch up and punch the ball out of Johnson’s hands for a fumble.  Almost instantly, safety Mike Mitchell fell on the ball for a Steelers recovery.  Before the fumble, the 30 yard gain would have given the Browns a first down as well as putting them well within field goal range.  This turnover was a huge blow to the Browns comeback effort.

As the Steelers offense struggled to the move the ball in the 2nd half, they also failed to capitalize on this turnover.  Three minutes later the Browns had the ball again with intentions to pick up where they left off the last drive.  After a first down and a few plays later the Browns would have another first down on their own 31 yard line. This is about the point in the game where Steelers Defensive Coordinator Keith Butler started to bring more pressure as opposed to dropping 7 and 8 into coverage.  On this particular play, cornerback Artie Burns would blitz from the left side and get instant pressure on Kizer.  Kizer didn’t have the time that he needed to make a proper read and forced the throw to Tight End David Njoku. Safety Sean Davis was able to step in front of the pass and intercept it ending the drive.

The Steelers and Browns would trade empty drives to end the game and the Steelers would survive one last Browns comeback attempt as rookie Wide Receiver Corey Coleman would drop a 4th down pass late to close out the game.

The Steelers finish the season 13-3 and will have a bye week during the first round of the playoffs.  They could be in line for a potential 2nd round rematch against the Jacksonville Jaguars if the Jaguars take care of business at home against the Buffalo Bills.