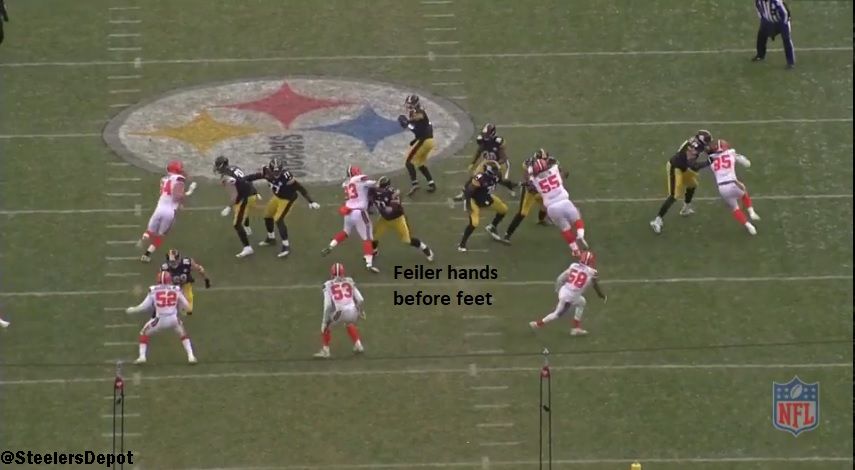 Our last regular season sack breakdown for the Pittsburgh Steelers’ 2017. In the finale, we have three of them to check out. We’ll still keep track during the playoffs and later in the week, do a wrap-up on the year.

This is a weird one. The Cleveland Browns’ defense didn’t do anything for the sack here. Just a matter of B.J. Finney stepping on Landry Jones’ foot on either a handoff of playaction. Jones falls down, turtles, and the Browns touch him up for the sack. In the GIF, you’ll see Finney step on Jones’ foot. So we’ll put the blame on Finney. Hard to tell what happened, maybe a false step by the center.

Lot going on here and a bad time for a forced fumble. Browns running a game between #94 Carl Nassib and #58 Christian Kirksey, slanting into the B gap. They get good penetration, Nassib walking back the pocket and Kirksey putting a jolt into Fitzgerald Toussaint, though Toussaint does as good of a job as you can expect to stay square and anchor.

That doesn’t give Jones a lot of space to go. What creates the sack is Alejandro Villanueva. Facing #1 pick Myles Garrett, Garrett has a great dip move. Uses his left (inside) hand to knock Villanueva’s hands down and then bend the edge. Garrett finishes the play, knocks the ball out, and the Browns’ DT makes a sweet snag for the recovery.

You could argue that Toussaint is at fault here but I think he takes the block on pretty well. Villanueva clearly gives up the pressure and the actual sack.

Not positive what’s happening with RG Matt Feiler here. Can’t tell if it’s a full slide with Feiler supposed to be going to his left or if it’s a half slide and Feiler is just sliding down because #93 is in his inside gap. But either way, Feiler steps inside off the snap and #93, Trevon Coley, swims him to the outside. Feiler lunges to try to recover but uses his hands before feet, and he has no power to punch. Caused him to lunge.

Marcus Gilbert is late to getting his head around after Nassib works to the edge and Coley splits them. Not the best pocket awareness from Jones but there really isn’t a whole lot he could’ve done anyway. Maybe Gilbert could’ve done more but some bad recovery technique from Feiler, so I’m putting it on him.