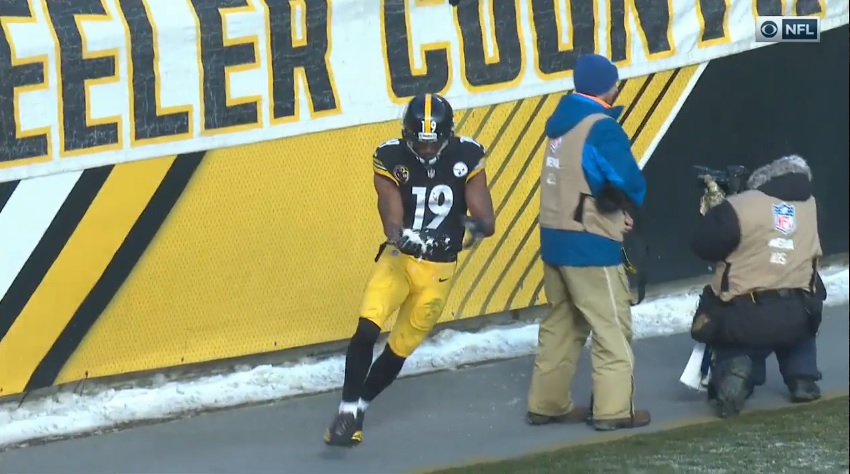 It was a bit nerve-racking there late, but the Pittsburgh Steelers sent the Cleveland Browns into infamy with a 28-24 win at Heinz Field, closing out the 2017 regular season with a 13-3 record and the No. 2 seed in the AFC playoffs.

With guys like Ben Roethlisberger, Le’Veon Bell, Maurkice Pouncey and David DeCastro sitting this one out, the Steelers were able to do just enough on offense behind Landry Jones, JuJu Smith-Schuster and Stevan Ridley.

Let’s take a look at how the Steelers performed on Sunday from a positional group standpoint.

Once again, I know most of Steeler Nation hates Jones just because he’s not Roethlisberger, but Jones stepped in for his fifth career start and turned in one of his best games of his career, completing 23-of-27 passes for 239 yards, 1 touchdown and 1 interception, finishing with a QB rating of 100.5.

Jones threw short of the sticks often in the second half, but for the most part he played well and made some great throws to beat the Browns.

With no Bell to lean on, Jones was able to turn to Ridley and Fitzgerald Toussaint on the ground, opening up passing lanes to find Smith-Schuster and Martavis Bryant for big days.

Jones did throw one bad interception to Jabrill Peppers in the first quarter and was later strip-sacked by Myles Garrett, but overall he got rid of the ball quickly and accurately, allowing the Steelers to mount an offensive attack in the win.

Ridley was a workhorse for the Steelers in just his second game as a member of the franchise. The veteran running back plodded his way to 80 yards and 1 touchdown on 17 carries, chewing up a strong Cleveland run defense to provide the Steelers with some balance offensively.

Toussaint spelled Ridley and rushed for 22 yards on 5 carries, adding 2 receptions for 9 yards on the day. Combined, the duo rushed for 4.63 yards per carry on just 22 attempts, which is an outstanding number against a run defense like the Browns.

Fullback Rosie Nix had a few cracks at the end zone for the third time in four games, but the tough, hard-nosed fullback was stood up at the goal line both times by Cleveland, resulting in a turnover on downs..

Has there ever been a rookie as good and as popular in his first year as Smith-Schuster has become in Pittsburgh? I can’t think of anyone other than former linebacker Kendrell Bell.

Smith-Schuster had the best game of his career against Cleveland, finishing with 9 receptions for 143 yards and 1 touchdown, averaging a ridiculous 15.9 yards per catch, breaking the Steelers’ franchise record for receiving yards by a rookie.

Along with Smith-Schuster, Bryant had a big game as well, hauling in 6 receptions for 65 yards on 7 targets, routinely working against veteran cornerback Jason McCourty, who had been very good through the season for the Browns.

Eli Rogers was the only other receiver to get work out wide, finishing with 1 catch for 1 yard, but Darrius Heyward-Bey sparked the Steelers’ offense early, taking a reverse 29 yards for the opening touchdown, replicating his touchdown run from last season on the road against the Miami Dolphins.

Vance McDonald and Jesse James combined for just 3 receptions for 14 yards, but the duo left their marks on the game as blockers, helping to pave the way for Ridley and Toussaint offensively.

It was good to see McDonald come out of the game healthy because he’s going to be such an important part of the offense in the playoffs, while James had one catch that looked like it shouldn’t have stood because he “didn’t survive the ground.”

The play wasn’t challenged, so it wasn’t going to be overturned. But, hey: football.

If you are going to have an opinion on the Steelers’ patchwork offensive line without Pouncey and DeCastro, the grade has to be based largely around the work on the ground, no?

That was disastrous. Hubbard struggles to snap the football in the gun consistently, but that’s what happens when you’re down to your emergency center.

Alejandro Villanueva struggled with Garrett at times, which comes one week after he dominated Jadeveon Clowney. Maybe that says more about Garrett and how good he is than it does Villanueva.

Fortunately, Villanueva, Ramon Foster and Marcus Gilbert all came out of this game relatively healthy, which should bode well for the Steelers heading into the divisional round of the AFC playoffs.

In the lineup in place of Cam Heyward, Tyson Alualu turned in the best performance of the game for the Steelers’ defense, recording 8 tackles, 4 tackles for loss, 2 sacks and 2 quarterback hits, helping the Steelers set a new franchise record for total sacks in a season in the process.

Alualu was strong against the run and routinely won his matchups as a pass rusher, making the Steelers not miss Heyward much in the Week 17 matchup.

Along with Alualu, Stephon Tuitt was strong on the day, recording 5 tackles and 1 tackle for loss, collapsing the pocket against the pass and standing strong against the run. Plus, he continues to hustle all over the place. Check out his tackle on Duke Johnson Jr. on a screen pass that he chases all the way across the field.

Javon Hargrave and LT Walton were rather quiet in the game, combining for just 2 tackles on the afternoon. Both were key in providing a rush up the middle against the pass, though.

TJ Watt turned in another great performance against the Browns, recording 8 tackles, 2 tackles for loss, 2 quarterback hits, 1 sack and 1 pass deflection on the day, but despite his big numbers, Watt played a key role in Rashard Higgins’ long touchdown catch in the first half, dropping into coverage.

It was a bad schematic call, so I won’t fault Watt too much, but he’s asked to drop into coverage a lot and should be comfortable there.

Bud Dupree was rather quiet on the day, especially in the second half where I can’t really remember seeing him on the field much thanks to a heavy dose of Arthur Moats. It will be interesting to see the snap count for Dupree, who didn’t a single defensive stat on the day.

Moats played well in the second half, recording one tackle while playing strong in coverage at times and setting the edge against the run.

Inside, Vince Williams finished off his first season as a full-time starter in fashion, recoding 4 tackles, 2 quarterback hits, 1 sack and 1 tackle for loss on the day. His sack gave him 8.0 on the season, which is very impressive from an inside linebacker in the Steelers’ 3-4 scheme.

Sean Spence gets better and better each week after signing with the Steelers off the street after Ryan Shazier’s injury. Spence tallied 6 stops on the day, including 1 quarterback hit on the day.

Big plays continue to be a concern. Sunday’s season finale against the Browns was no different as Josh Gordon hauled in a 54-yarder over Joe Haden and Mike Mitchell to set up a Johnson touchdown, while Higgins shook free for 2 touchdowns on the day.

In fact, Kizer threw for 314 yards on the day, giving him his first career 300-yard passing game in a game that the Browns should have won, if not for that Coleman drop on fourth down.

Haden had an awful game through two-plus quarters or so, but he bounced back in the fourth quarter, aside from a blown coverage on Josh Gordon’s 33-yard catch-and-run where he looked like he was in zone coverage with everyone else playing man.

Artie Burns was strong on the day, building off of a great game in Houston. Burns recorded 2 tackles, 1 pass deflection and 1 quarterback hit, drawing a holding call in the process after blitzing off the corner.

William Gay had a big strip on Johnson Jr. at the end of a long catch-and-run to force a turnover, but Gay struggled to come up in support against the run, missing a few notable tackles while also trailing Higgins in coverage for the second-year receiver’s second touchdown of the game.

Sean Davis recorded his third interception of the year and had a good game as a blitzer and run supporter, but he missed a key tackle on Higgins’ long touchdown run after the catch. He’s got to get better at tackling in space.

As for Mitchell, fans just want to crush the guy for every big passing play without even remotely understanding scheme and coverage. I thought Mitchell was solid on the day, aside from Gordon’s long catch.

Mitchell recovered a fumble that was forced by Gay and might have scared Coleman with a big hit coming on the fourth-down drop.

Chris Boswell was not called on to kick field goals on the day, instead drilling all 4 extra points on the day, but Boswell did kick a kickoff out of bounds, giving the Browns good field position following a Steelers score.

Punter Jordan Berry struggled at times on the day, recording a punt of 36 yards that gave the Browns good field position again, while recording an average of 36 yards a punt. However, he bounced back strong following that shank, dropping 2 punts inside the Cleveland 20-yard line, capping off the season on a high night after the day started off poorly for him.

In the return game, Smith-Schuster returned a kickoff 96 yards for a score, giving the Steelers their first kick return for a touchdown since 2010. It wasn’t an easy return either as Smith-Schuster had to break a few tackles in the process, capping off an incredible regular season for the rookie.