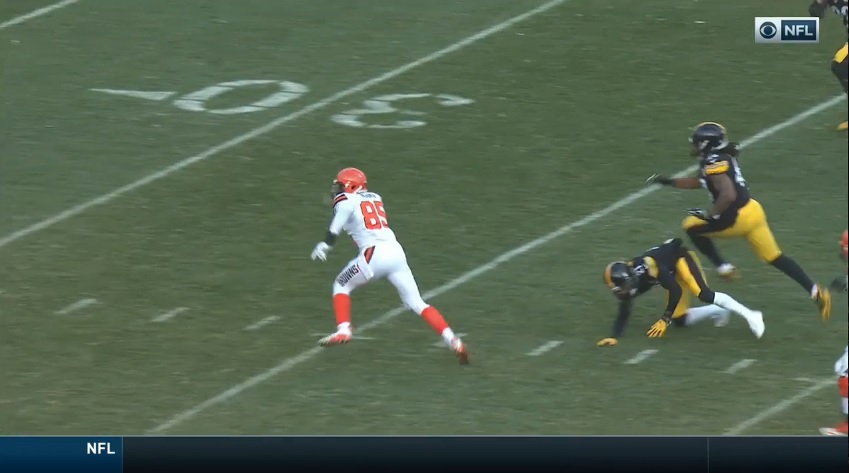 After two straight weeks of strong performances in the tackling department, the Pittsburgh Steelers took a step backwards in Sunday’s cold, snowy affair at Heinz Field against the Cleveland Browns, cracking double digits in missed tackles for the first time since Week 14 against Baltimore Ravens.

Four defensive backs missed tackles in the win, but fortunately for the Steelers, just two misses resulted in a splash play for the Browns.

Let’s take a look at the final regular season missed tackles report for the Black and Gold.

Early on against the Browns on Sunday, things looked good in the tackling department as the Steelers missed just three tackles in the first half, highlighted by one miss from Sean Davis on Rashard Higgins’ 56-yard catch-and-run for a touchdown.

In the second half, things seemed to fall apart a bit on the Steelers’ defense as missed tackles led to a few key plays for the Browns, resulting in Cleveland nearly pulling off the upset.

Let’s take a look at some of the misses.

This is a simple slant route for Higgins against rookie linebacker TJ Watt. I didn’t give Watt a missed tackle here because he’s diving to try and make a play on the ball, instead of trying to tackle Higgins. If you disagree, comment below and let me know why. But I feel that’s clearly not a missed tackle.

Once Higgins makes the catch in front of a diving Watt, he has a ton of open field to run into the secondary, leading to the touchdown. Davis doesn’t take the best route to the football, resulting in Higgins blowing past him. Trailing him, Davis attempts to dive at Higgins’ feet to trip him up, but he barely gets a hand on him, resulting in Higgins racing into the end zone for the Browns’ second touchdown of the game.

Early in the second half, David Njoku forced another big missed tackle by a Steelers’ defensive back, resulting in a big play.

On another short throw by Deshone Kizer, Njoku completely undresses Joe Haden in the open field. In just his second game back from a leg injury, Haden had a rough game for the Steelers, culminating in this missed tackle.

He’s hesitant at the point of attack here, drops his eyes and whiffs on Njoku. After the big, athletic tight end forces the miss by Haden, he is able to run away from a few Steelers defenders, resulting in another miss by Bud Dupree before Watt is able to corral him to the ground in the red zone.

Things got worse for Dupree, who was mostly invisible as a pass rusher against the Browns.

On a read-option here by Kizer, Dupree is left one-on-one in space against the rookie quarterback. Dupree takes one false step inside on the read-option, giving Kizer a step towards the edge, resulting in the missed tackle by the Steelers’ outside linebacker.

Kizer is a big, strong quarterback, so arm tackles aren’t going to cut it. Dupree has to be much more disciplined here and have better depth in the backfield on the read-option.

After two weeks of great tackling performances against the likes of the New England Patriots and the Houston Texans, the Steelers clearly took a step back. Here’s hoping they get back to the Week 15 and 16 performances in the divisional round of the playoffs.