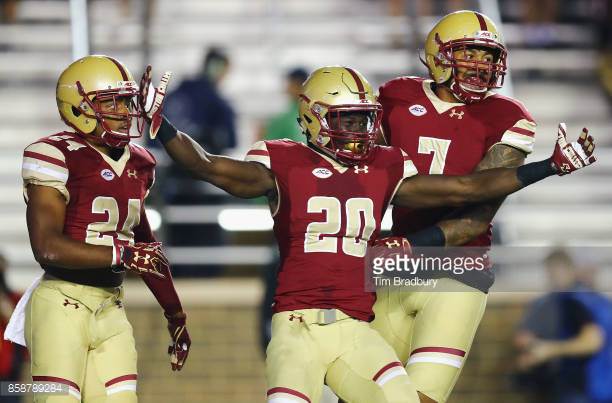 The 69th Reese’s Senior Bowl had their annual media day yesterday afternoon. The best chance of the week to talk to the players and find out more than just what they show on tape. Throughout this week and next, we’ll break up the interviews between some feature articles and some that are just transcript. For this one, a transcript of my interview with Boston College CB Isaac Yiadom.

As a heads up, these were all done on Tuesday, the first day of practice, so the questions reflect that.

Q: Take me through your first day. With a new playbook, new scheme?

A: I’m adjusting to it well. They’re not throwing too much at us. It’s just enough. It’s been a great opportunity to work with the Broncos staff. So I’m really enjoying and taking advantage of it.

Q: Is it more zone or man? Do you have an entire of what Denver is going to ask the secondary to do?

A: I think they’re going to try to make us run avariety of things so tams can see what our strengths and what our wekanesses are.

Q: One of the things that jumped out watching you was how well you played the run. The physicality, getting off stalk blocks in the run game. Where does that come from?

A: At Boston College, that’s just the way we’re coached most of the time. Just not quitting and being invovled in the run. We gotta be physical to get off blocks and make plays. It’s a habit.

Q: What makes you comfortable in press man?

Q: When you’re doing film study, what do you watch for in a receiver?

A: Majority of the time I don’t watch the receivers so much. I watch the different formations and the different splits they line up in to get a gauge of what they’re going to run.

Q: Where does your ability to find the football in the air come from?

A: I think I have good size so I have a big radius. So when the ball is in the air I have better or equal chance than the receiver.

Q: Gotten any feedback from scouts?

Q: Do you have any idea what you’re going to run?

A: I don’t know the exact times because I haven’t been timed yet. I just know fast – I’m fast.

Q:  Have you run a 40 before at Boston College?

A: A long time ago. I’ve gotten a lot faster since then.

Q: Any communication with the Steelers?

Q: What do you know about Pittsburgh?

A: Not much. I watch Artie Burns, he’s one of the corners I watch a lot.

Q: I assume you’re going to play on the outside a lot here?

A: We’re going to play outside and inside.

Q: How much were you man or zone at Boston College?

Q: What coverages did you run? Do any pattern matching?

A: Press man. And quarters.