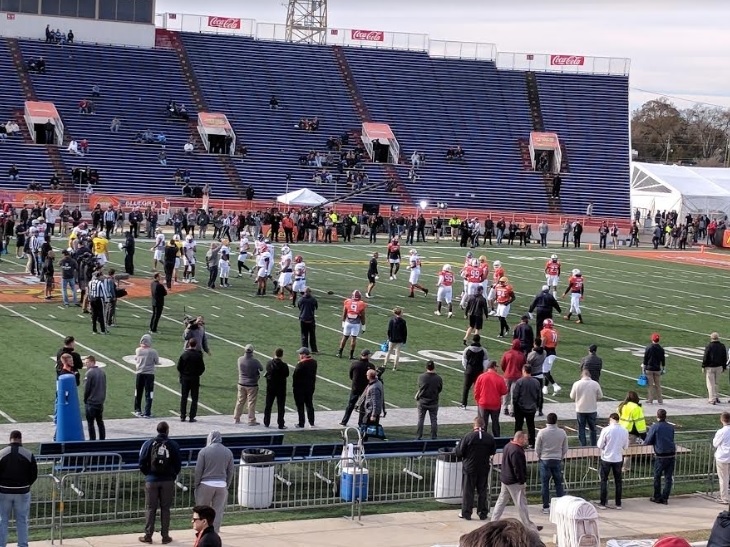 Last day of practice. Have a little extra time at the hotel so let’s go through what I’m looking for on the North and South sides.

– I don’t think Marcus Allen has been bad but he’s felt quiet. Wasn’t a big playmaker in college and he told media during the week he wanted to change that perception. Lot of other safeties have made that plays. Not Allen – yet. One last practice (and a game, of course) to change that.

– Ditto with South Carolina’s JaMarcus King. Seen a little bit of him but haven’t felt much of an impact either.

– I need to take a closer look at BYU ILB Fred Warner. Watched the All-22 on him. Easy mover, sifts through the trash, can shoot gaps in the run game. Might be what the Pittsburgh Steelers need.

– Also need to see more of the pass rushers. Just haven’t watched them enough. Garrett Dooley looks really good on tape. How active his hands are, the way he doesn’t get stuck as a pass rusher. Great pass rush plan. This is the kind of dude the team needs, even if he isn’t the most athletic guy of the bunch. Doesn’t dominant every rep (but wins plenty) but never looks terrible either.

– Some of the media guys have given me the heads up on Rutgers’ Kemoko Turay. Great frame, bend, and initial step. Only 6 TFL and 3 sacks is a concern, especially for a team like Pittsburgh that will care plenty about production.

– Maybe I’ll get a chance for a closer look at the offensive linemen. Scouts seem split on Pitt OT Brian O’Neill. Tyrell Crosby has reportedly looked very good and I’ve liked what I’ve seen in the couple reps I’ve viewed after the fact. And some of the interior guys; VT’s Wyatt Teller and Michigan’s Mason Cole.

– Utah’s Kyle Fitts could be the bigger pass rushing threat the Steelers need. Most time spent with his hand down but he’s flashed.

– Jeremy Reaves is a guy who had hype coming into the week but I swear, to me at least, has been invisible. Need to see something out of him at corner.

– CB M.J. Stewart has had a good week but I want to focus in on him in one-on-ones. Haven’t gotten a chance to yet.

– Ian Thomas has felt quiet this week. Chance to step up with some of the other tight ends going down but not a lot seemingly going on for him.

– Marcus Davenport really could use a big day tomorrow. Too inconsistent, pad level too high, not getting his arms extended, effort isn’t always there. Not seeing the first rounder he’s been hyped to be.

– LSU RB Darrel Williams has a true run demeanor and can catch out of the backfield. Solid week. Let’s see if he can finish strong.