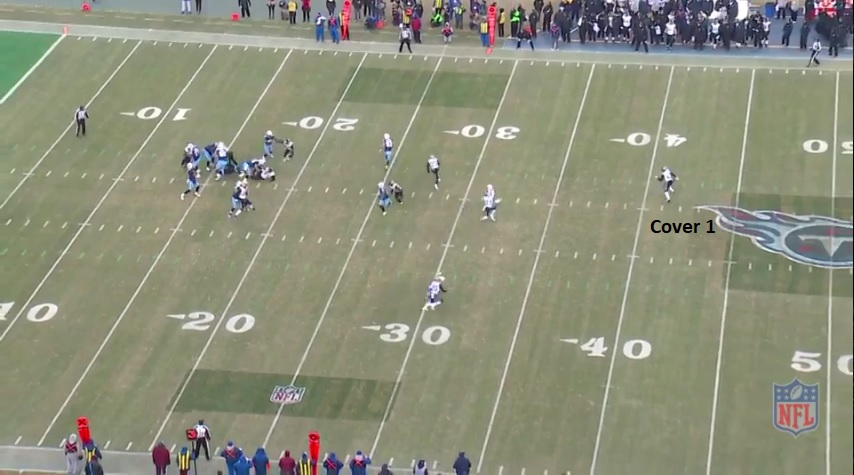 Another check in of a very tough Jacksonville Jaguars’ defense.

It’s a base 4-3 defense. And a good one top to bottom. Up front, you have #93 Calais Campbell, the surging vet who racked up 14.5 sacks this season to lead the team. He generally plays as the strong side 5T, meaning he’ll flip, and so both tackles have to be prepared to face him (Gilbert is a much better matchup than Hubbard). Malik Jackson will play the three, Marcel Dareus the one, and Yannick Ngakoue the weakside defender and primary pass rusher.

Linebacker has some serious speed. Telvin Smith weakside, Myles Jack strongside, and Paul Posluszny in the middle. Some injuries to that group, Posluszny left last week with a bum hip and the backup is hurt too but it looks like all three will be available Sunday. In sub-packages, Smith and Jack stay on the field because of their athleticism. I think it’s going to be tough to run to the perimeter against these guys. Fast flow makes it hard to win the edge, which is unfortunate, because the Steelers have been showing success there.

One example. Stretch run by Lesean McCoy. Flow to the frontside forces the cutback and into the nose tackle’s arms.

I’m trying to keep everything between the tackles. Though that may not be easy either.

They went out and got Dareus for a reason. Look at the entire season’s stats and the Jags’ run defense looks weak. They’re giving up 4.7 YPC, tied for 23rd in the NFL. But go from Game 8 on and that run defense is much improved. Since then, it’s down to 3.7 YPC, tied for 5th best. Drastic difference.

Point is, there is no easy answer. But I’d rather go up the middle than to the outside. At least you’re gaining ground.

Some stats. Since Game 8, they’re allowing 25 runs of 10+ yards, slightly below average. Three of them went for 20+, tied for 5th best in the league. As you probably know, they finished the year with 55 sacks. Campbell with 14.5 of them. The defensive line combined for 39 of those 55, so you know they’re relying on that front four to get home.

Their red zone defense is excellent. Second overall at 37.9%, and tops in the league on the road. So tough to defend. Third down defense is top five too, coming in 4th place at just over 32%.

The same suspects as before. Jalen Ramsey, AJ Bouye, Aaron Colvin in the slot. Safety is a little weaker but not by much. Tashaun Gipson at FS, Barry Church at SS.

Bouye leads the team with six interceptions though they come from a lot of sources. Mostly the secondary though Telvin Smith has three of them.

What’s interesting about their pass defense is they don’t give up many big plays. 40 passes of 20+ yards, top five in the league. But when they give up a big play, it’s usually a biiiig one. 12 have been completed for 40+ yards, one of the worst figures in the league. So a chance to go deep on an aggressive group that puts their corners on islands.

Mainly a man coverage team and I expect that to remain against the Steelers. But they throw some wrinkles in there off that. Here’s a zone coverage/pattern match the Steelers use too, 2 Trap, with Ramsey quickly putting a stop to this out route.

But you’ll get a heavy dose of Cover 1, sometimes with a Rat like Jack, who will key the quarterback and deny any crossing routes.

Though most of their pressure comes from the front four, they aren’t afraid to mix in some blitzes. In Cover 1, you’re often going to get a six man pressure and they’ve brought the corner from the boundary several times. Like here.

It’s an aggressive mindset through and through.

A rejuvenated unit, this group is playing well over the course of the last several games, making it even more difficult to gameplan against. They’ve been highly productive along the defensive line, and they’ve welcomed a newcomer who has made a significant impact.

We’ll start with an obvious candidate for defensive player of the year, defensive end Calais Campbell. He has 14.5 of the team’s 55 sacks this season, a career high for Campbell. Not much to be said about this guy that hasn’t already been covered extensively. He has deceptive speed for his size, and can create problems for even mobile quarterbacks.

Abry Jones and Malik Jackson are the interior tackles (Jones often lines up as a nose), and Yannick Ngakoue comes in as the other defensive end. He and Campbell line up on both sides and will throw in some different looks along the line.

The team added a nice piece to their rotation midseason after acquiring DT Marcel Dareus from Buffalo. He’s been a valuable asset in combating the run game, and is used in a rotation largely on early downs. He is strong enough to plug gaps, but is athletic enough to combat zone blocking schemes and double teams. Here’s a solid example of his push downfield. 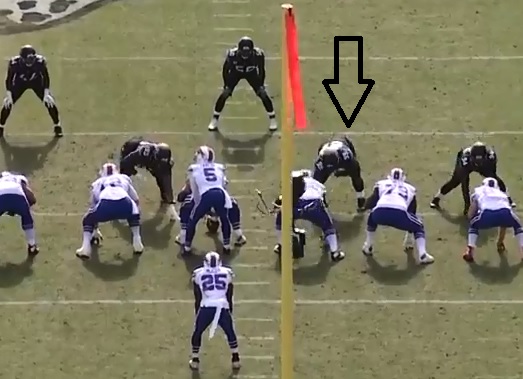 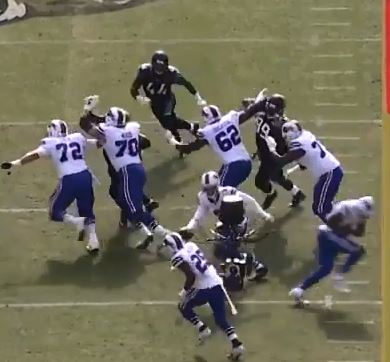 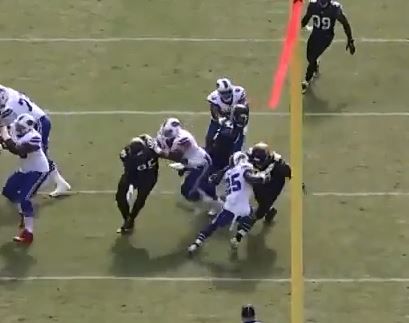 Dareus is lined up in a 3-technique between the guard and the tackle. They are running a weak zone, so the guard chips Dareus, while the tackle tries to push him as far left as he can. But Dareus’ speed and power help him fight off the chip and bring him downfield much quicker than the tackle can recover from. It’s a quick stop in the backfield for negative yards. He’s a big-time force, and it’ll be interesting to see how the Steelers plan to implement their zone schemes.

The Jags also like to show different looks along the line, and this opens up opportunities in the pass rushing game. Take this play below, for example. The Jaguars have four down with six in the box. They rush five including the corner with their linebacker dropping into coverage out of the three point stance, and the sam, Myles Jack, rushing from a two-point. This causes some confusion at the line, and Malik Jackson wins out.

He’s head up on the center, and is very active with his hands at the point of attack. Splits the center and guard quickly, forcing the offensive lineman out of position which gives Jackson an easy lane to the quarterback. When this team switches up their blitz schemes, it’s very confusing for the opposing line, and that’s when these interior defensive lineman can make huge impacts as pass rushers.

Perhaps the weakest group on the defense, they also find themselves a little banged up heading into Sunday’s tilt at Heinz. Mike linebacker Paul Posluszny didn’t participate on Wednesday with an abdomen injury, but upgraded to limited on Thursday. Meanwhile his backup, Blair Brown was limited Wednesday, but didn’t participate Thursday. It looks like this unit should be intact come gametime. Posluszny is the run-stuffer of the group and is great at plugging gaps. He’s the guy you’ll find somewhere in the pile every play.

Myles Jack is the most highlighted member of the group. He’s a very physically gifted athete, and is well-rounded in both the run game and pass coverage. He is often used to blitz from the sam position. Will linebacker Telvin Smith is also a promising, young player. He, too, was limited this week, but should be a go on Sunday as well. He’s very good in coverage, can run down backs sideline to sideline, but sometimes struggles when taking on linemen.

A.J. Bouye lines up on the other side, with Barry Church as the strong safety, and Tashaun Gipson as the free safety. Aaron Colvin is the nickel corner. We know how good these guys are against the pass, but they are incredibly well rounded.

Church and Gipson are solid at covering tight ends, and are physical safeties that make plays all over the field. And as we’ll see below, the corners can make impacts in the run game as well.

That starting four have combined for 301 tackles this season; that’s a lot for a secondary. They fly to the ball, and much of it has to do with their discipline. They don’t overpursue very often. 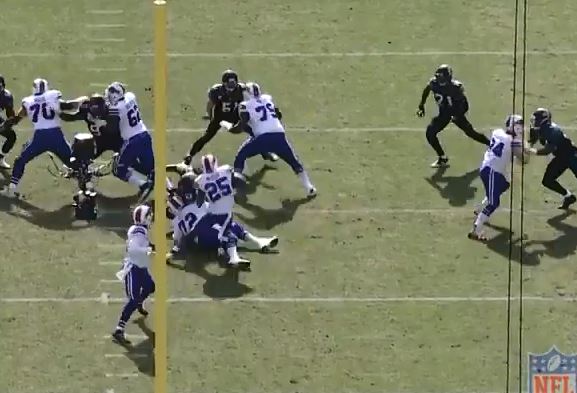 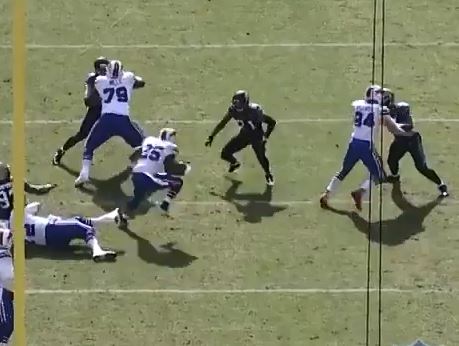 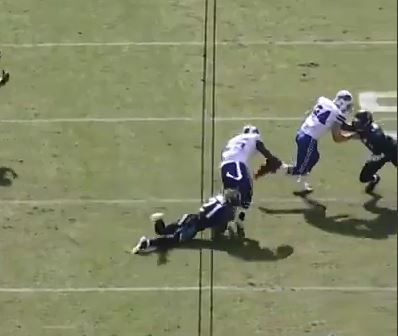 Here A.J. Bouye finds himself in the c gap on this zone run. It’s just him and shady McCoy in space, usually not a good sign given McCoy’s shiftiness. But instead of trying to make a play further in the backfield, Bouye chops, holds his lane forcing McCoy outside and then wraps him up for a tackle for loss. This could have been a very dangerous play, but here Bouye shows good discipline and makes a nice play in the backfield.

Overall it’s an improved run defense, and a secondary that continues to dominate. A tall task for the Steelers this Sunday.