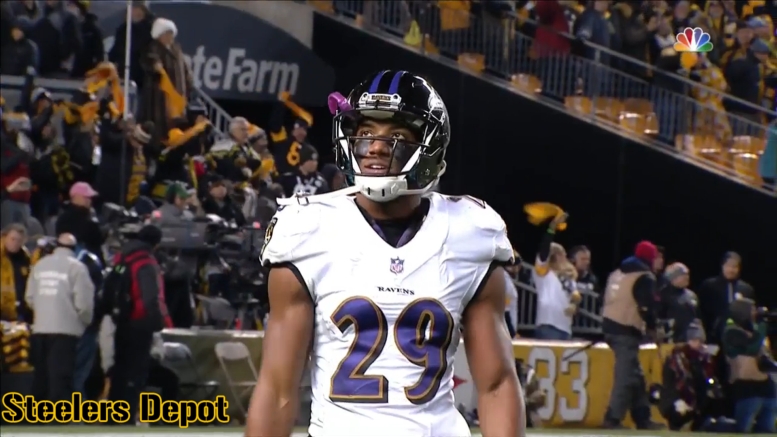 Baltimore Ravens general manager and former Crimson Tide player Ozzie Newsome sure loves drafting Alabama players. He was more than happy to ‘settle’ for Alabama cornerback Marlon Humphrey in the first round of the 2017 NFL Draft, even though they seemingly did not have a role for him.

Heading into the year, they had Jimmy Smith returning to one cornerback post and acquired Brandon Carr in free agency to man the other spot. The rookie from the previous season, Tavon Young, was to be the slot cornerback, and there was other depth as well. Humphrey would be able to be worked along.

That ended up not being the case, first after Young was injured, and then when Smith went down at the end of the season, which resulted in the rookie being in the starting lineup. He was thrown into the fire, but he generally did well and held his own.

Recently, however, he evidently held on to a phone charger that wasn’t his and got himself into a bit of trouble. He was arrested while back in Alabama for third-degree robbery. Reportedly, he had borrowed a charger from an Uber driver and “refused to give it back when arriving at a hotel”.

According to an article written by Jamison Hensley, ESPN’s Ravens blogger, the incident took place a couple of weeks ago and involved a charger worth about $15. For a first-round draft pick who became an instant millionaire less than a year ago, it does seem rather absurd.

The Ravens released a statement about the incident yesterday following Humphrey’s arrest:

“Marlon told us that it was a misunderstanding regarding a $15 telephone charger, which he thought was his. Our understanding is that he has been interviewed by University of Alabama Police and is cooperating. We are monitoring the situation”, the team conveyed.

After refusing to give back the charger, Hensley writes, “he then took other cables from the vehicle upon exiting and elbowed the driver in the side after the driver attempted to recover the charger, police said. Humphrey damaged other property when leaving the vehicle and balled up his fist and ‘acted like he wanted to fight’”, according to the police report.

He goes on to write that the police spoke to him in the hotel room, where Humphrey maintained that the charger was his. But the officers attempted to connect it to his own phone and found that it did not go with it, so returned it to the driver.

Former Alabama cornerback Dre Kirkpatrick, a starter having completed his fifth season with the Cincinnati Bengals, Tweeted after the news, “note to all pro players that go to Tuscaloosa to live like your [sic] still in college. Grow up please and thank u”.

While he may have impressed on the field for his first season in the NFL, he evidently still has some work to do off of it as he adjusts to an ‘adult’ life in which he is responsible for himself and his own actions. This is a lesson that almost all professional athletes have to learn coming out of college, and many do find out the hard way.