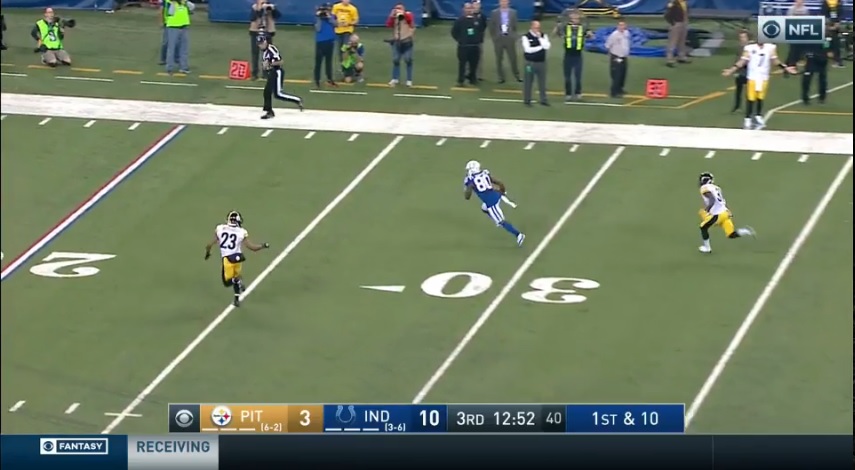 “What we’ve got here is a failure to communicate.”

That quote from Cool Hand Luke is how I would sum up the Pittsburgh Steelers’ secondary. A failure to communicate. One half is speaking English, the other half talks in Klingon. Oh sure, the team has discussed it all year long. We gotta clean it up, we got get better, we need to communicate.

Consider me skeptical. I’ve heard it all before.

Here’s Arthur Moats talking about poor communication in the preseason. And Keith Butler points out needing to improve it in this mid-September interview around the 1:30 mark. Again, Butler says communication isn’t good enough right before Christmas. And Sean Davis points to communication breakdowns after the regular season finale.

It’s probably been mentioned ten more times throughout the season – that’s what I found in literally 90 seconds of work. And, I mean, it’s good that it’s being acknowledged as a problem. But Mike Tomlin has always been a team about actions, not statements. And I gotta be honest – getting pretty tired of statements without action.

Some turbulence was expected. It was, after all, a pretty new secondary. Adding Joe Haden at the last second. Mike Hilton taking over in the slot. And young guys like Artie Burns and Davis still working out the kinks. Perfection wasn’t on my checklist.

But this? This? Minor improvements followed by big regression. That’s far from what anyone was looking for.

It’s the central reason why the Steelers’ defense has given up as many chunk plays as they have in two decades. Thirteen completions of 40+ yards, eight of 50+, three of 60+. All which rank in the bottom five worst in the league. The 50 yard completions are the most they’ve allowed since 1998.

These chunks plays often aren’t the result of the Steelers flat out getting beat. Outrun, outmuscled, a great offensive scheme or anything like that. It’s Steelers beating Steelers. Communication breakdowns, receivers getting wide open.

In fact, the defense actually kept a lid on things early in the year. It took until Week 6 until they allowed their first double explosive play. So it’s not 13 of those over 16 weeks. Try 13 of those over 11, more than one a game. Things have only gotten worse over time, maybe the most troubling and confusing part of it all.

The point of all this is to say if the Steelers falter in the playoffs, it’s probably going to be because of the secondary. You can’t afford to have those types of breakdowns this time of year. Teams are too good (ok, I’m writing this during the Jaguars/Bills games so maybe I’m wrong), the margin of error too thin.

No question, it’s the biggest question mark that hangs over the head of this team right now. Do you have trust in this defense to play smart and clean for three consecutive games? It hasn’t happened in the regular season. Why would it be different now when the stakes are higher and the teams better?

I’m not trying to say this defense is terrible. There’s talent there and it’s shown up in moments. Burns, Davis, Hilton, they’ve all made plays. Haden has been a terrific pickup. And I’m the last of the Mike Mitchell defenders. There are moments where it all comes together. But there are equally as many where you wonder if these guys have ever played together before.

When you make Deshone Kizer look like a capable quarterback, twice, there’s more than a couple of red flags raised. But it wasn’t just Kizer, not just the finale, when I guess you can argue the defense was packing it in. Jacoby Brissett found Chester Rogers wide open midseason. Three Steelers took the same receiver against Detroit, leaving Eric Ebron wide open for a 44 yard gain in the 4th quarter of a close game. Brett Hundley had Davante Adams for a long TD. Communication problems prevented the team from properly doubling Rob Gronkowski to close out the Patriots game, New England marching with ease to take the lead and ultimately win.

The problem and the solution boils down to one word: trust. Do I trust the secondary to step up over the next month? Not really. I’m hoping they do and they can, it’s certainly not impossible, but from what we’ve seen throughout the year, same statements followed by same results, it’s difficult to say they’ve earned such faith.

But if it does get fixed, it’ll be because of trust. Trust in the other guy to do his job. Trust in the preparation, film study, the techniques that have been worked on since spring ball.

They’ll depend on that trust and communication if they’re going to make the run everyone is expecting.