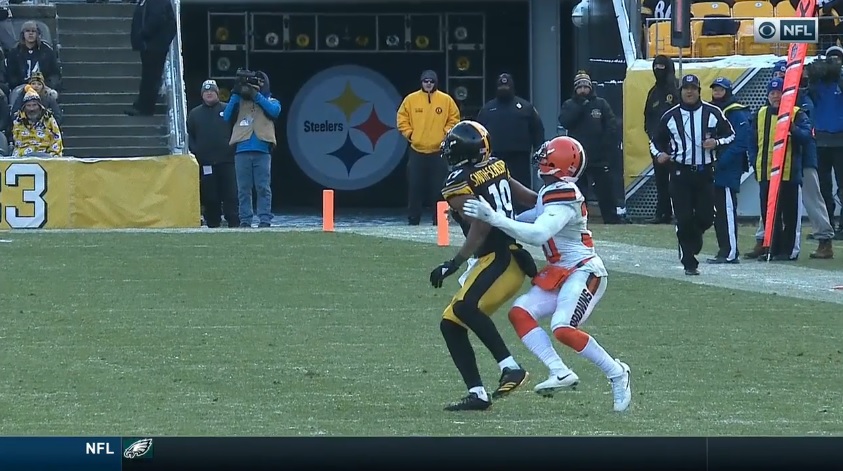 There hasn’t been a bigger breath of fresh air this season, one that’s been full of drama for the Pittsburgh Steelers, than JuJu Smith-Schuster. He ended the season on a high note with over 140 yards receiving and the team’s first kick return TD in nearly 300 tries. It caps off a rookie season that exceeded everyone’s expectations, probably even the coaching staff’s, and puts him in the conversation for rookie of the year.

His fun-loving perspective is infectious. After the game, he combined that side of his personality with the seriousness of focusing on the playoffs and making a Super Bowl run. NFL Network’s Aditi Kinkhabwala asked Smith-Schuster about his mindset for the playoffs.

“Thank god that we got a bye week. Take care of your body. Going into the playoffs, it’s going to be crazy. The guys that I play with, we expect a lot out of them. Not only from myself but from everyone else. Super excited to go into the playoffs and man, just trying to stay lit.”

Here's @TeamJuJu breaking down sleeves, Le'Veon Bell's lessons and how to use the playoff bye. On @nflnetwork. pic.twitter.com/72u1wLcVxF

While he’s been an outgoing personality, he’s repeated how important – and teammates have agreed – it is to be serious when it’s time to work. He’s shown accelerated growth at a difficult position to play as a rookie and that’s after missing a large chunk of camp and the preseason with an ankle, knee, and concussion. For most, it would’ve set them back for the entire year. Smith-Schuster has been focused, detailed, and the results prove it.

But at the same time, he’s been a big kid. As you may have heard on the CBS broadcast, Mike Tomlin joked to Bob Labriola that JuJu has more in common with Tomlin’s kids than he does his teammates.

“About 16 or 17,” Tomlin said when asked how old he would’ve pegged Smith-Schuster to be when he interviewed him. “He plays Call of Duty with my boys. That’s JuJu.”

Tomlin continued in his sitdown with Labriola, noting the differences between the rookie and Antonio Brown.

“When my sons come to practice, he gravitates toward them, because he probably has more in common with them than he does with Antonio Brown. AB is a grown man, he has multiple mortgages and kids and responsibilities and so forth, and JuJu wants to play Call of Duty online. That’s where he is in life, and that’s OK. It’s refreshing that he’s comfortable in his shoes.”

But Tomlin also compared Smith-Schuster to Maurkice Pouncey, a 20 year old who showed a high amount of maturity for his age. Pouncey paved the way and gave the team confidence to draft other 20 year olds like Le’Veon Bell, Ryan Shazier, and now Smith-Schuster. Not a bad track record.