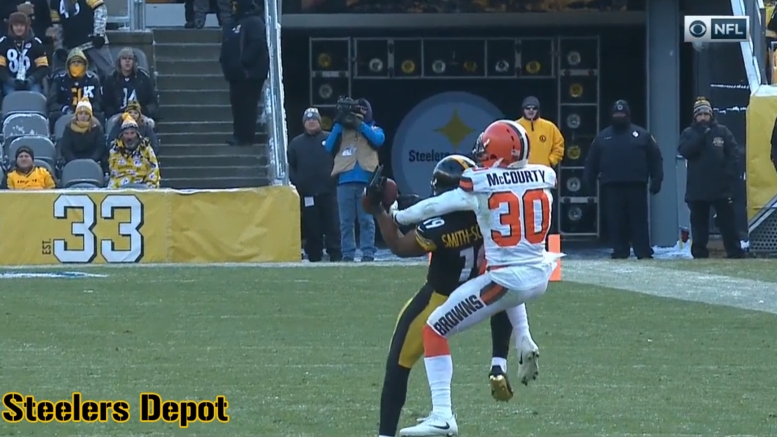 Somewhat lost in the shuffle was a bit of NFL history for the Pittsburgh Steelers and their enthusiastic rookie wide receiver, JuJu Smith-Schuster. Following a monster game in the season finale, the second-round pick became the youngest player in the history of the NFL to record at least 1000 all-purpose yards in a season.

JuJu Smith-Schuster (@TeamJuJu) is the youngest player in NFL history to have 1,000+ all purpose yards in a season pic.twitter.com/3yAflLgwIa

All-purpose yards, of course, go beyond receiving yards, although he did not come too far from reaching the 1000-yard mark on that alone. All-purpose yards also go beyond yards from scrimmage, and also include return yards.

Smith-Schuster, who was just 20 years old when he was drafted, and only turned 21 less than a month and a half ago, was the Steelers’ primary kick returner this season, though, of course, kicks are rarely returned anymore.

He returned just nine kicks all season, but that included two in the season finale, and one of those two went for 96 yards and a score. He had 122 return yards to add to 143 receiving yards in the game, totaling 265 yards from scrimmage in that one game alone.

On 58 receptions, Smith-Schuster gained 917 receiving yards and added another 240 yards in the return game. He did not carry the ball during the year—he had one jet sweep that was classified as a backward pass instead—which results in a season total of 1157 yards.

Of course, that is not a rookie record, by any means, even for the Steelers. He actually barely cracks the top 10. And, in fact, if Pro Football Reference’s data is accurate, then Smith-Schuster is not even the youngest player on the Steelers, let alone in the history of the game.

There is the case of Bill Dudley, who in 1942 was the first-overall pick in the draft by the Steelers. Born December 24, 1921, he was 20 years old when he entered the league. Smith-Schuster was born on November 22, so he would have turned 21 sooner in his rookie season than did Dudley.

That alone is 1289 yards, but he also added another 60 yards returning three interceptions, which counts toward all-purpose yards. And, as a matter of fact, the last game played of that 13-game 1942 season was on December 6. So Dudley was 20 years old for the entire season.

If this data is correct, then clearly Smith-Schuster is not the youngest player in NFL history to record 100 all-purpose yards in a season. Nor did he score the most touchdowns under the age of 21, as Dudley had six, including five rushing and one returning.

I frankly don’t understand how and why this was missed. Credit to Dom Rinelli, who did not report this, and he has all the Steelers stats.