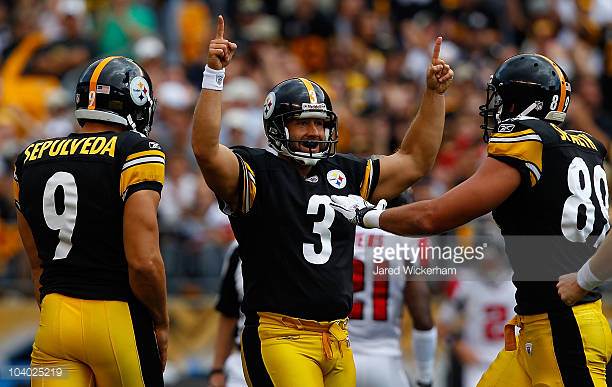 Lot of tension, lot of drama in Steelers’ Nation over the season, this week included. We need to loosen up that collar and have a couple laughs, yes? So here’s a good one. Jeff Reed is hosting a Pittsburgh Steelers’ party the day before his former team takes on the Jacksonville Jaguars. He sent out this tweet two days ago.

As the tweet indicates, clearly designed by a 5th grader, it’ll take place in Indiana, PA and go into early Sunday morning.

Reed has had…let’s say some issues with partying in the past. Most of you know about his adventures at Sheetz, punching a paper towel dispenser in 2009. He was cited with disorderly conduct for the damage.

From the Pittsburgh Post Gazette, who reported on the charges at the time.

“State police said Mr. Reed, 29, was in the restroom of the convenience store on Route 22 in New Alexandria at 2:50 a.m. when he began “banging on something” and making loud noises.

He then “used profane language towards a Sheetz employee stating that there were no towels in the restroom,” police said.

“Reed continued using profane language in a loud manner outside the store. Reed caused damage to a towel dispenser as he was infuriated at the fact that there were no towels in it,” according to police.”

So let’s hope this place has plenty of paper towels to spare.

Reed, to his credit, was an excellent kicker for the Steelers who spent nine years with the team. He still ranks second in franchise history in field goals made and points scored and figures to stay there for quite some time.

The eagle-eyed Ashley Chase took this snapshot of the bar Reed will be hosting the event at.

Jeff Reed Steelers tailgate party at Wolfie’s in Indiana, Pa. might be the best worst idea anyone has ever had. pic.twitter.com/WdIrRT2mR1

She’s also done the Lord’s work by pointing out the nearest Sheetz locations nearby.

Updated map including the closest Sheetz locations, just a few blocks in two directions from Wolfie’s on Philadelphia St. near 6th.

Obviously, I’m sure – or at least hoping – all goes without incident this time around. I think IUP is still on break, that’s definitely a good thing. And hey, if you’re in the area and want to see a former Steeler, go for it. If something goes down, drop us a line: [email protected]