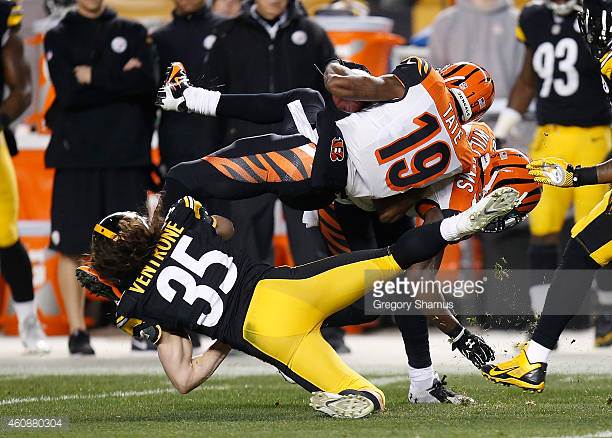 Bringing you another Pittsburgh Steelers’ interview courtesy of our good friend Ron Lippock of the Pittsburgh Sports Daily Bulletin. Today, Ron chats with the one, the only, Ross Ventrone, who played for the team on and off from 2013 to 2016. They discuss his fun personality, his nicknames, and what it’s like being cut 29 times in a single season.

First, can you let readers know what you’re doing with yourself since your time in the NFL?

Me and my buddy, I’ve been working with him. We’re doing training stuff – working as professional trainers for high school kids. We want to give them better training than what’s out there. Prepare them for college.

Coming from a small college like Villanova, you know how hard it is to make it in the NFL. What was the hardest adjustment for you?

It was very different for me as an undrafted free agent. I signed with New England first and I realized how much of a faster game it was and how much I needed to learn and the knowledge I needed to play faster. You think you know a lot about football then you get to the next level. I  learned a lot  but it seemed like so much information I needed to know. It was overwhelming. Studying a lot and learning the game like that – it felt new to me. I wasn’t playing as good football as I wanted really until I got to Pittsburgh. I wasn’t knowledgeable enough to play fast. The speed of the game is an issue because you need to know the playbook – you need to know that stuff to play faster. Otherwise you’re a step behind.

Who helped you most to adjust to the NFL – on and off the field?

My older brother played in the NFL – he’s actually a coach for New England now. He was in the NFL for years before I got there. He was undrafted like me too. I had someone I could talk to every day – who was my best friend – who went through the same things I was going through. He helped me to transition to the NFL and helped me with my study habits. He explained the importance to me of those things before I got to the NFL.

So what made you decide to sign with the Steelers in 2013?

At the time I was in my third year in the league. I got hurt in New England during camp and didn’t sign anywhere for a whole year. I had a high ankle sprain.

As soon as the season was over Pittsburgh brought me in the next day and signed me to a futures contract. It was my only option but once the call came in I told my agent I didn’t want him to reach out to any other teams. I was excited to play for my hometown team.

Being released and signed so many times-  twenty alone in one season in New England – how did that affect you and do you think fans get the stress players go through being on the bubble like that?

No – fans have no idea about any of that stuff. It was hard. In New England I was signed a million times my second season in New England. It was tough because I learned to spin it as a positive thing – that they kept wanting me back. I must be doing something right. But then you ask yourself why do they keep cutting me? It plays head games with you. It’s stressful. You never know what play gets you cut and you start thinking more about how to stay on the team versus making plays.

It was hard on me. I never felt prepared for games.  I wasn’t able to take many reps in practice because of when I was signed. It was always so sudden – I never felt comfortable. The biggest things were feeling confident and comfortable and I never felt that until Pittsburgh. That’s when I think it helped me and my play to get better.

In Pittsburgh, the stress kind of went away. I felt more confidence in my play and from the coaches.

What were the biggest difference between New England and Pittsburgh?

I was fortunate to play in two very successful organizations. Both were run unbelievably well. There were similarities between the two. The tradition of winning both had was important to me. Obviously, Mike was more of a players’ coach. It was hard to have conversations with Bill outside of football. It was easier for me to talk with the Pittsburgh coaches. Also, I had a couple of years in the league when I was in Pittsburgh so I wasn’t stressed out, so that helped too. My personal relationships with Mike and Bill were different. It’s not that one was better, they were just totally different people.

Okay – so the obvious question. Tell us about Rusty Benson – how that got started?

When I was in middle school, my brother’s buddies used to call me Russ. That bothered me and they would keep doing it. My Driver’s Theory teacher in high school was Rust Benson so I was frustrated because then they kept calling me that.

So at one point I embraced it and then everyone started calling me that. When I got to the NFL I wanted to continue the nickname but it’s hard to tell people to call you a nickname – especially one that’s a whole name as a nickname. I made it my Twitter account handle. I wanted a chance to show my personality – that I was lighthearted and funny. That I can have a good time despite the craziness of the game. This was an easy way to show that.

How did that humor and other humor show itself in the locker room?

When I filmed the locker room video for the Penguins playoff games no one knew what I was doing. I told them all not to pay attention to me – just to keep looking at their phones and do what they were doing. When I skated in with the Penguins uniform on and helmet and started my speech, the guys started laughing and pulling out their phones to record it. I had to tell the guys not to film me and put it on social media – I wasn’t going to release it for another few days! It was funny because they had no idea what I was doing. Most never saw the movie Miracle to know what the speech was about…

Any other memories you fall back on there?

No specific memories. The thing I take away most from Pittsburgh is my relationships with the players. I’m very lucky that I made the friends I have through football. I’m still close with Troy Polamalu, Jesse James, Chickillo. They are all very good friends. I’ll remember those relationships most.

Football in general – the friends I also made in New England. I’m just lucky to have those. If I remember anything, it’s pretty much all of that.

Any on-field memories that stand out?

I was a special teams guy and being up and down all of the time it’s hard to remember something. I remember [running back Cedric Perriman] who played for the Bengals was tough on special teams. And the Baltimore games were always crazy. I do remember going up against Waller – a 6’8″ guy who was Baltimore’s gunner. He ran like a deer even though he was so big. I tried to get a hand on him and he ran right by me. He was a monster. I was thinking – how can this guy run like this? He was a freak…

The Cincinnati game when Shazier caused the fumble late in the game and all the craziness afterwards. To be a part of that game … it was one of my favorite games of my career.

Any advice for young players entering the game today?

There were lots of times in my career when giving up would have been the easiest thing to do. Chock it up and move on. But I pushed through anyway. You never know what you can endure when you face adversity. All of us have to push through something. You have to believe in yourself and never give up – in life and sports. You can push yourself harder. Never doubt yourself. Once you do that, then you’re lost.