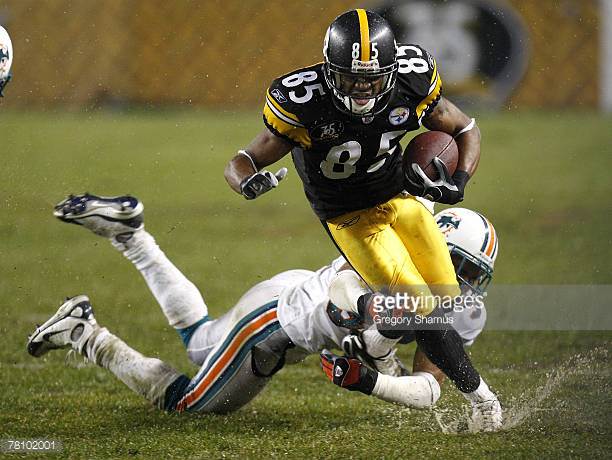 Bringing you another Pittsburgh Steelers’ interview courtesy of our good friend Ron Lippock of the Pittsburgh Sports Daily Bulletin. Today, Ron talks to Nate Washington, a former Steelers’ receiver and pride of Tiffin. They discuss what he’s doing in retirement,

First, as you just recently retired, can you let us know what your next steps have been since your time in  the NFL?

I’m just catching up now to my family life. My wife waited for me for years while I was in the NFL…. I  just got married last year and have a newborn. I’m starting a new life…my wife and I are starting a business together but it’s still early to talk about that.

It’s officially my first year being retired, so I’m just getting done sitting on my butt and getting things done!

I am yes. I started the 85th Foundation in my second or third year in the league. Coming from Toledo, Ohio, it was of major importance for me to give back. When I grew up there Jim Jackson and Lincoln ran charity events and camps for the area and gave back to the community.  But there was no one between them and my time. I wanted the community to know that it was a key point to me making it.

We do that through the foundation ‘stoy drives, turkey drives…ran a camp this year. We still do all we can to reach out to the community. I value having a presence there. We also now expanded and do work in Nashville, Houston, and Toledo. Toledo is the backbone but we know it’s important to widen our exposure as there are people in need in many places.

How difficult was that post-NFL adjustment for you, especially as it’s still new?

It was difficult. It’s not easy for anyone but I was able to take it in stride. I was more prepared. I saw my whole career as a blessing. The last couple of years I started making it a point to appreciate the game more. During the national anthem I would close my eyes and smell the grass in the air and take it in.

I told my wife that the NFL was like a relationship. It was my wife, my best friend, my lover, my confidant. It was always there for me. Then it just stops. It dies. It’s like a death. Some cry over the casket, and some weep by themselves, alone. I’m that person – I’d sit alone. It affected me mentally, but I could deal with it. I was always like the captain on my teams and I still help friends who call with issues getting dealing with it on how to handle it.

Why was it easier for you in some ways?

I just knew tomorrow it might be over for me. I could appreciate the game. I knew it would be alright when it was over and that’s why I was different than other guys. They never expected that their time would come. I was content, coming from Tiffin University. I was never supposed to be there anyway. Not that I was fully content when I played, but I got two Super Bowl rings and played for eleven years. I was ok with letting the game rest and moving on.

Was there pressure on you, being the first ever player to make it to the NFL from Tiffin?

It’s really funny you say that. No one put pressure on me – I put it on myself. No one came in saying that I had to make it for the rest of them. They just had joy – extreme happiness for me. I was an undrafted free agent. When I went home as a rookie they congratulated me on being a Steeler. Their favorite team! But I hadn’t made the team yet!

I couldn’t see their happy faces then stand with them not having made it later. The hope people had in me…I prayed and cried about it. I had to make it and give other people hope.

In my interview with Doug Whaley, he mentioned that Steelers scout Phil Kreidler had his eye on you early on in the scouting process. Were you aware of this?

I had no idea, but I will say this. The way things were going, it would be foolish to think there was no one behind the scenes looking out for me. On the Steelers, as a rookie, no one knew me at the time. But in the locker room they treated me like one of their own. I wasn’t an outcast. I was an asset.

Even the front office, when I’d walk through, they always ask “Hey Nate, you need anything?” I felt welcomed. Like I belonged.

Who helped mentor you as a Steeler – on and off the field?

I’ll say this, In comparison to other places,  it really was a family atmosphere. When I made the team, Colbert pulled me aside on the day of the cuts. I was avoiding the front office people all day, then ran into Kevin and was scared. He pulled me off to a side office and told me to keep it to myself, but congratulations, I made the team. Kevin made sure I knew I was part of a family. Jerome pulled me aside after and told me he didn’t know I was from Toledo. That he was going to make sure I was raised right as a Steeler and have a successful career!

What stuck out most though was Willie Parker. He was like a big brother to me. We’d stay at the Allegheny Center and most players had assistants or teammates that would help get them to and from places. Willie was an up and coming name then. He had fans in Pittsburgh. But everyday he’d ask me if I wanted to go out to eat, or just hang out. He made sure I knew it was all possible.  He was a small school guy – an undrafted free agent too. He gave his all and I was always up under him. It goes beyond words though, how grateful I am. The whole team. Hines and Antwaan would smack me in the head if I dozed off in the meeting room! I would not have the career I had if I hadn’t started off in Pittsburgh.

Any memories that stand out most for you there?

My family was not too far away, but during holiday times, I would go to Charlie Batch’s house. I always had floor time there when I ate too much! Whether my family could make it there or not, his house was always the place to be. They always welcomed the whole team. All the guys without families would eat good and pass out watching football.

Santonio and me also always had this incredible relationship. I love that boy to death.  When I look back on it he was either always at my house or I was at his. It wasn’t like that with everyone. He was always the cheapest richest guy! He used to stay at the Allegheny Center as a rookie. It was really for guys with no little money – undrafted free agents and rookies. They let the elderly stay there, But Santonio stayed there his entire rookie year. I think he still drives the same Impala his dad gave him in college!

One story about Santonio. He hated reckless driving. If a driver weaved in and out of traffic he’d panic. Once we were in a bigger city – I think it was New York. We’d take cabs to go out and eat, and one day we took this cab and it was weaving in and out of traffic like crazy. Santonio yelled at the driver to “Stop the car! I’m walking!” We were six blocks away still from the hotel. But he refused to ride with him anymore. I nearly died laughing. He said he would not play with no cars!

Tell me about leaving the Steelers in 2008? How hard was that for you?

It was the hardest decision of my eleven-and-a-half year career. It boiled down the fact I had mentors on that team. When it came time to leave, Hines told me “The reality is we all love you but we all know you should be a number one somewhere.” That I won two Super Bowl rings already so the best thing was to reach for more and carry over what they taught me. He told me that “If I came back and signed for less that what I was supposed to get they’d smack me in the head every day!”

That Thursday night of free agency started at 12 AM. I was playing video games with friends. I was four years into the NFL but was unaware of the business side of the game. I was just playing football. I was not into contract disputes. I just wanted to play.

I got a call at 11:30. I was like, who was calling me this late? It was Coach Tomlin, and he asked me what I was doing. I was like, what do you want! He said that I better not go somewhere else before talking to him first!

He was kidding. He said he just wanted to call before 12. That it was an honor to coach me no matter what happens and wished me good luck.

It went the other way for me when free agency started, but it was the hardest decision of my career. It was a business decision but it was like I was leaving my family. I left all  I knew about the NFL. I didn’t know what it would be like somewhere else. It was scary. But I was inspired by the guys in the locker room. Their belief in me gave me the courage to make the decision.

After experiencing all of this, what advice would you give players entering the NFL today?

Understand what you’re getting yourself into. In college, the big catch, interception, or big touchdown pass is exciting. Hearing the crowd cheer…But in the NFL it’s a business. One day you can be the greatest player and the next the worst thing walking.

It’s a career and you need to take care of yourself. It doesn’t work just as a game. It’s a business. You have to adapt and grow and handle yourself as a man or you get swallowed up quick. It’s about growing and having a career. About doing something that a lot of people never have a chance to do.