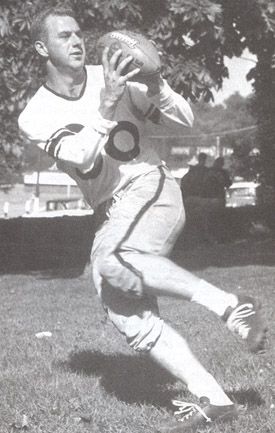 Bringing you another Pittsburgh Steelers’ interview courtesy of our good friend Ron Lippock of the Pittsburgh Sports Daily Bulletin. Today, Ron chats with Jimmy Orr, who played for the team for three years in the late 50s/early 60s.

First, tell us a bit about how you ended up in Pittsburgh?

Well, I was drafted by the Rams as a junior out of college. I hurt my knee and I thought I was done, but they drafted me in the twenty-fifth round then. I played in the Blue-Gray game and they signed me after that. I played very little in preseason.. I got in shape and came back in time and played the Steelers that preseason in the last game.

I caught a pass for a touchdown in the first quarter of that game and remember running by Steelers Coach Buddy Parker and watching him throw his clipboard down as I ran by him. The next day me and Billy Ray Smith were in the hotel lobby getting ready to leave when a guy walked up to us and told us Pete Rozell wanted to talk to us, and that we should bring our playbooks. That was never a good thing. Turns out the Steelers traded for us.

So Billy and I drove up to Pasadena where the Steelers next game was. We ended up in Pittsburgh that whole season, and I caught a pass that first game with them versus San Francisco. I remember flying back to Pittsburgh – we didn’t get in until 7:00 am. The weather wasn’t anything like Pasadena. I was wondering what in the heck I got myself into!

The next week I caught  seventy-yard pass from Earl Morrell but fumbled it out of the endzone for a touchback. I was wearing long sleeves so I blame it on them!

Who helped mentor you in Pittsburgh and how did you become such an accomplished receiver early on?

After the second game they traded for Bobby Layne. He and I talked football all the time. His opinions and so forth.

He said he heard I could play receiver and that he heard Sammy Baugh may have helped me get to Pittsburgh. He was a coach at the time and was close with Harry Gilman. Gilman was sitting in the press box that preseason versus the Steelers where I scored the touchdown and he was the one who supposedly talked Sammy into trading me to Pittsburgh.

So, as you may have heard, JuJu Smith-Schuster recently broke your fifty-nine year old all-purpose yardage record for a Steelers rookie. Any thoughts on that?

You know, I didn’t even know about the record. I know my last game I caught six passes for over two-hundred yards and three touchdowns. And that was against one of the best – against “Night Train” Layne.

Players are bigger and faster now and they throw the ball a lot more. The whole time I was there they ran much more than they passed. I only caught 400 passes but I had a 19.6 yards per catch average and caught 66 touchdowns. If I played today I could probably break some records too!

What made you such a good receiver?

When I went to college at Clemson I was thinking I would be a basketball player. But that didn’t work out so I went to Wake Forrest but knew I better look for something else. I walked on at Georgia after a friend’s uncle had me talk to the coach there to see if I could play football as a walk-on. The coach said I could play and stay with the team in their dorm but I had to pay my own tuition. After practice though that next spring, they gave me a scholarship, much to my surprise.

I was a fifth string halfback then. Back then if a player got hurt in a quarter they couldn’t come back until the next quarter. Those were the rules. So after a couple of guys got hurt I played and caught a forty-five yard touchdown pass.

I started the next season and I led the SEC my sophomore and junior years – with fifteen catches! That’s unheard of now. That’s how little they threw then. I was drafted actually as a defensive back by the Rams but I told them I couldn’t play defense so they moved me over to receiver.

Tell me a but about some of those Steelers characters like Bobby Layne?

Layne – he was good at drinking. There were no curfews then. You could stay out as long as you wanted. So he would take me out with him late but it never affected out play.

Stautner was there too. Tom Tracy was a running back fro Detroit and Buddy Dial was another good wide receiver.

Tell me what happened to get you traded in your third year?

I went to Duquesne Law School in the offseason. I got sick and was in the hospital – it was a cold winter – I just didn’t think I wanted to play any more. But Baltimore called and wanted to trade for me and I ended up saying yes.

You played for another ten years – what changed?

Well, the weather got warm again and I got better, They had traded for Billy Ray Smith earlier and he told them I would play for them. They ended up trading Big Daddy Lipscomb and some other guys for me. I told them it would take a week for me to get back in shape and get there. They told me this wasn’t Pittsburgh, they needed me there that night. So I left my wife behind and got there at 11:00 pm!

It was a great experience in Pittsburgh. Me. Bobby Layne and later Len Dawson, we would all go out and talk football…

We were 7-6. We were pretty good, just not a championship team. I think we missed the playoffs by a half of a game. I remember Bobby Layne taking the whole team out to a restaurant that overlooked the river where the stadium is now. He paid for all of the food and drinks.

What do you think of the way the game is played today?

I like watching it. It’s great – I wish I had played now that they pass the ball so often. In the mid-70’s they moved the hashmarks in. When we played we didn’t have that kind of room. The Eagles and Detroit used to line up linebackers over me and cornerbacks behind them. It was hard to get off the line with those bigger guys in front of me!

Back when I played there were guys like Detroit’s Bill Pellington who was just a mean defensive player. Night Train Layne was the toughest cornerback I played against. He would clothesline you and do all of that stuff when it was legal.

What were our thoughts then on the coach and the Rooneys?

The Chief was great. I remember running into him in the lobby when I worked in Atlantic City. I comped him a room. He later sent me a thank you letter for the room and for playing for the Steelers. He was a great man.

Buddy Parker was an excellent coach as well. He watched a lot of film. I remember when we played the Giants hey had a defensive lineman that wouldn’t let anyone get to the outside of him. So Parker told us we wouldn’t try – we’d either run inside or go the other way. He had a good understanding of defenses and put good gameplans together. We just weren’t the best team in the league…

Back then, we just weren’t making that much money. I once went into the office and asked them why they took ten percent off of my paycheck. They told me that at the end of the year many players were broke and they’d have to pay for their way home. It was a different world then. I made $8,000 and that was really good money back then. The Steelers weren’t well-known for paying their guys a lot!