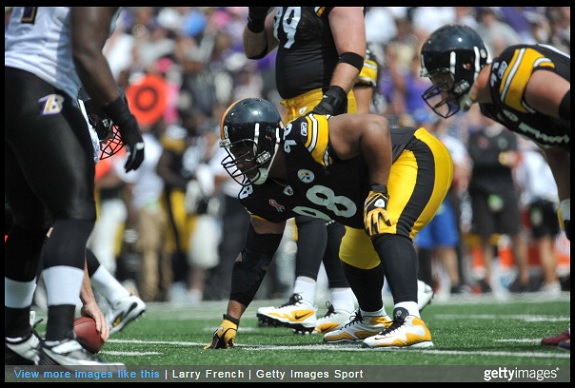 Bringing you another Pittsburgh Steelers’ interview courtesy of our good friend Ron Lippock of the Pittsburgh Sports Daily Bulletin. Today, Ron interviews Casey Hampton, the well-known nose tackle for the Steelers. In it, they discuss Hampton’s current health, playing under John Mitchell, and what Bill Cowher told him at his Pro Day.

First, tell me a bit about what you’ve been doing since your time in the NFL?

I’ve been spending a lot of time with my son – he’s into sports so I’m trying to make myself available to him. Spending time with my family and relaxing.

How hard was that post-NFL adjustment for you?

It was a little bit of an adjustment. My body was hurting so bad it didn’t matter. I loved the game but I was just hurting too bad. I knew it was time to hang it up. I’m a very family-oriented guy, so that was easy for me.

How is your health now?

Oh, I feel so much better now.

Stepping back…let’s talk about the draft. Were you surprised to be drafted by the Steelers? And did the fact they traded up for you add to the pressure you felt to make a quick impact?

Oh it was no surprise. I worked out in Austin for Cowher and Coach Mitchell at my pro day. Cowher watched me work out and told me they were going to draft me then.

As for the pressure -it was no pressure for me. I was always confident in my ability and what I could do. I just needed to learn what I needed to do. But I knew I could compete at that next level once I learned that.

I spoke to a few guys, including Aaron Smith, who spoke about working with Coach Mitchell. How tough he was at first. What was your experience with him?

It was different for me I think. His biggest threat with players was really to cut you, and being a first round pick that really wasn’t a big threat for me!

Coach Mitchell treated everyone the same at first. He was a great coach. Once you proved yourself he’d treat you a certain way then. He treated everyone differently and was very tough, but he was always fair.

So you get drafted to play nose tackle. How hard was that adjustment for you?

Well, I never played nose tackle at Texas. I was a one-gap defensive lineman and made a lot of plays there. My coach always use to tell me that the linebackers were on scholarship too, to let them make their own plays. I led the team in tackles. So it was a huge adjustment for me to play nose tackle

Kimo on Oelhoffen helped me a lot. He was a great technical guy – he had it down to a science, so he helped me with the technique. I think he was just happy to move outside and let me fight off the two and three guys on the inside!

So it wasn’t entirely unselfish?

Ha no. I think he was very happy to help me learn the position and let me handle that!

Was it frustrating for you, not getting to make plays like you could in college?

Not really. When I first got there I played in the nickel and dime and it was fun. Playing the zero was a huge adjustment – holding guys up for the other guys. But it wasn’t frustrating. They started pulling me out of the nickel after my third season. Not making plays was frustrating then at times but then you see how it all works and that you can make plays within the scheme. And how it helps other guys make plays and that your role is important to the defense.

You had a lot of playoffs experience. What worked and didn’t work for you as you prepped for playoff games?

We really approached them the same. We knew what was at stake and figured that we could run the ball well and played good defense so we always had a chance. We always wanted to be more physical than other teams. That would keep us in games. That was our approach. We never worried about this or that player on other teams. We only worried about how we played.

Does it bother you know, that the NFL has changed much of its rules and style of play to make the game much less physical?

I liked the way it was, but everything evolves. You see it in basketball, in baseball with home runs. It’s all built on entertaining the fans. The bottom line is about the fans. I’m not like some of the old school guys who don’t like it. I understand it. The runs outside, more passing, fooling teams instead of overpowering them….that’s the game. It doesn’t bother me.

Speaking of how things have changed, You’re not a big social media guy. What’s your take on how social media has impacted the players and game?

I think some do it the right way, but most do it the wrong way. Most like the attention. They like all the eyes on them and they like to use social media to do that. If we had it then, we’d have had a lot more trouble I’m sure. There were quite a few guys then who would have gotten into trouble if we had that. Not for doing anything big, just small things that turn into big things on social media. We had some fun, crazy outings.

Who were some of the toughest guys you faced as a Steeler?

In practices, Pouncey and Hartings were the toughest guys I went against. Pouncey was really quick off the ball.

Kevin Mawae was one of the toughest guys on other teams. The quick guys were the ones that gave me the most problems. The ones that just got in the way, that grab you and pull you down. I hated those guys – the ones that would run down the line and cut you and really piss you off.

Getting back to mentoring a bit. How hard was it for you when you became the veteran player who was mentoring guys who may be trying to take your job?

Not at all. I’m the type of person that wants everyone to get their shine and play well.  I’m all for helping the younger guys. That’s why it’s crazy to see James Harrison not helping those young guys on the team. That’s not the Steelers way. When it’s not your time any more you know it. The Steelers succeed because we bring the young guys along and help them to be better so we have a better team. That’s why the Steelers are so good all of the time. They draft guys that get the Steelers way. They only know that one way.

Does it surprise you, hearing about Harrison’s behavior in Pittsburgh?

It’s not surprising. He’s a cool guy. I love James. But James can be James sometimes. He can go into his things, you know? On the field I wouldn’t trade him for anything in the world. But he could be unapproachable to guys sometimes…