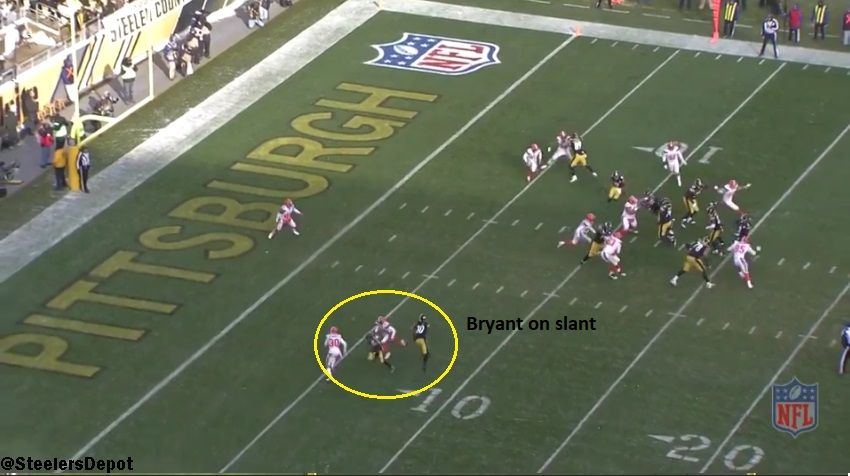 Game notes from the regular season finale, a 28-24 win by the Pittsburgh Steelers over the Cleveland Browns.

First snap of the game. Garrett tries to long arm Villanueva. Villy has strength to throw his shoulder down, bury him. #Steelers pic.twitter.com/KJDOqaT1Q4

– Matt Feiler has some nasty to his game. Once he gets his feet pumping…and this is against Danny Shelton.

Oooooh, I see you Matt Feiler (#71). Like his demeanor in the run game. #Steelers pic.twitter.com/iGFGIQaWBf

– Third and long. Steelers back in 2 Man. Covered well but man coverage, eyes off the ball, helped Deshone Kizer scramble around. 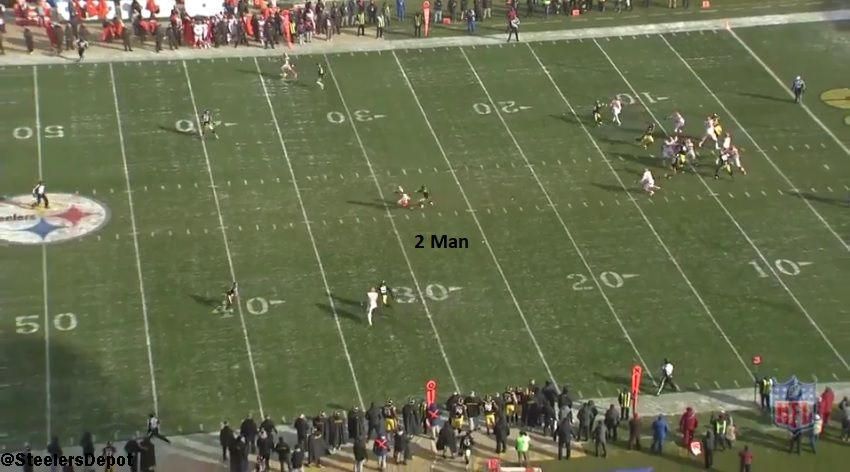 – Punt return team. Fitz-Matakevich-Fort-Chickillo-Nix-Golden. DHB and Brian Allen jammers to one side, Artie Burns and Cam Sutton opposite.

– Good job to recognize the CB blitz and hit JuJu in the flat for a huge gain. 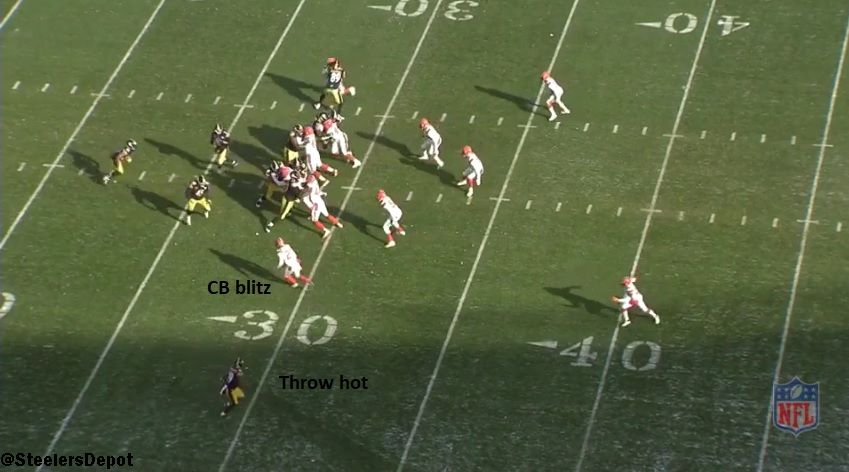 – JuJu Smith-Schuster has really helped as a blocker, too. Team comfortable motioning him to the wing and blocking the backside end on this pin/pull scheme. Doesn’t have to be pretty, just needs to get in the way so he can’t flow freely and squeeze the play. 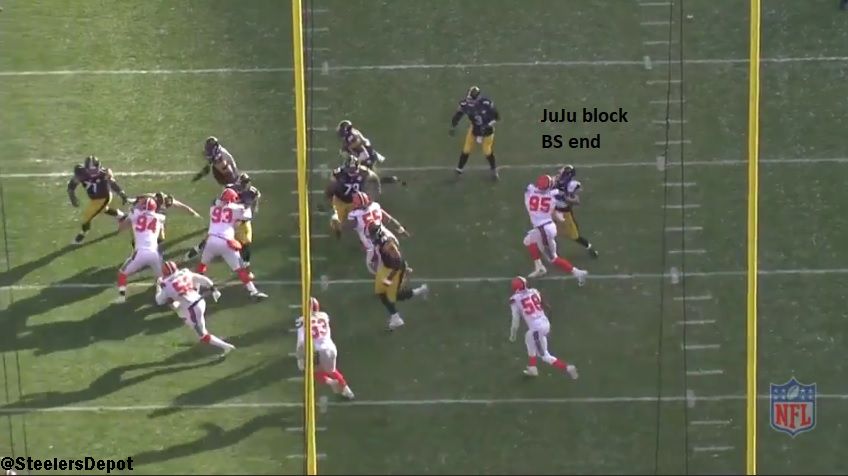 – Landry Jones should’ve hit the slant here, not the fade to Eli Rogers. Roughing the passer bailed him out. 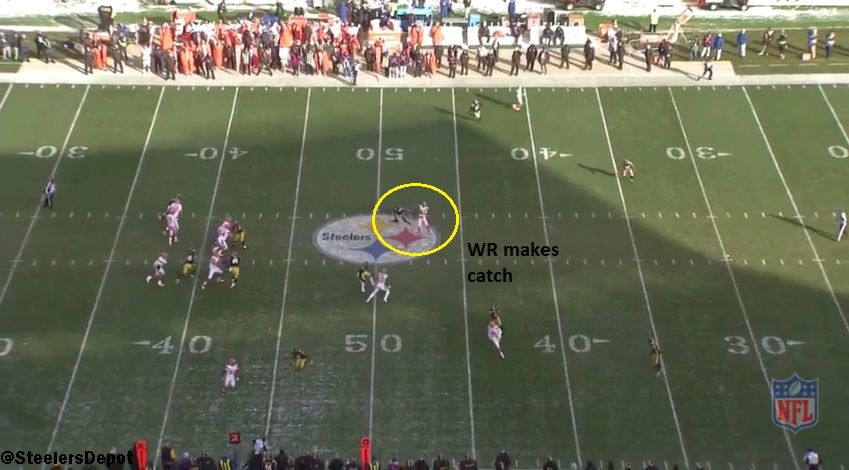 – Steelers doing a better job defending the over route, something that killed them out of Cover 3 in the past. Joe Haden passes it off to Mike Mitchell and then gets depth to play inside leverage and bracket #1 on the post. Well done.

I'll give Steelers' secondary this. They defend the vert + over route much better than the past. Safety rolls down to take over route, CB peels off to bracket #1. pic.twitter.com/3weUYNF0og

– Stephon Tuitt loses his gap…Kizer rushes for a first down on third and long. 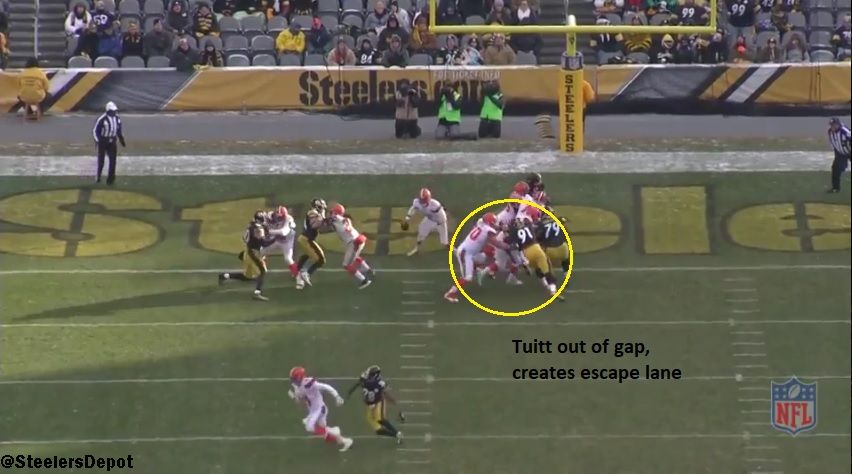 – Nice throw by Jones on the slant. He’s struggled with these throws. Needs to see more of this.

Landry Jones best throw of the day. Ones he has always struggled making. Moves the sticks on 3rd and 4. #Steelers pic.twitter.com/FPvoBjgaBL

– Will Gay came all the way from his LCB spot to force the fumble. Disappointing the defense gave up so many yards on 3rd and long but nice hustle play.

Will Gay came a long way to force the fumble. Frustrating Steelers gave up so many yards on 3rd and long but another effort play on the year. #Steelers pic.twitter.com/XzXycbbG4J

– T.J. Watt was really impressive vs the run. We’ll do either a video or breakdown of that in the near future.

– Both as a blocker and return man, I’ve liked what Toussaint has done in the kick game. Getting better…