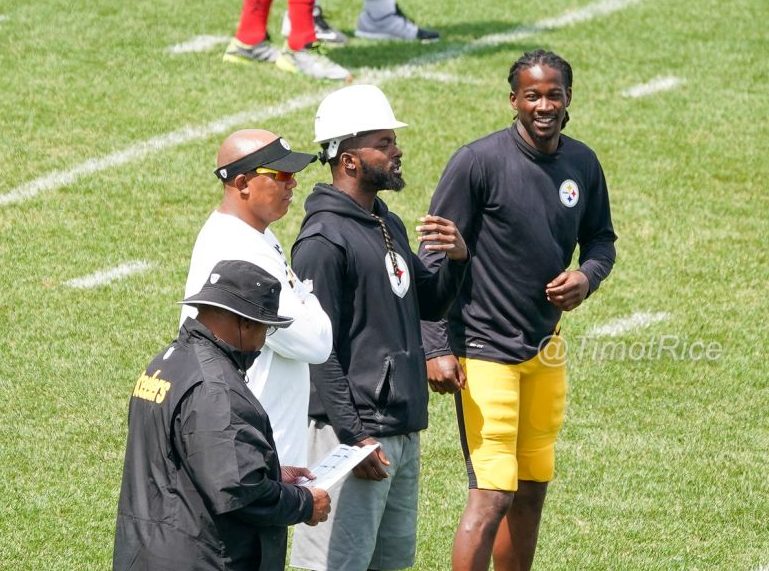 Losing Richard Mann to retirement might be the worst part of the Pittsburgh Steelers 2018 offseason. Incredibly valuable asset and Mike Tomlin seemed to actually get a little emotional discussing what he meant to him. But ultimately, life moves on, and the team will have to replace him. Here are five options – and some bonus ones – who could be in the mix. All speculation from a blogger blogging away in his basement. In no particular order…

Hines Ward – I wouldn’t have really considered him seriously if all he did was intern with the team in training camp. Lots of players do that – I wouldn’t consider Alan Faneca for the offensive line gig if it opens up. But he did spend at least part of the regular season with the Steelers, attending a couple of games, which makes me think he’s serious about coaching in the NFL and the team is serious about giving him that experience.

Still, Ward’s never formally held a job coaching and I think it’s a stretch to put him in that role right away. But he’s an option and if I don’t list him, you’ll yell at me.

Bob Bratkowski – The guy I mentioned months ago when Mann said he was going to retire. Out of coaching last year, he narrowly lost out to Mike Mularkey for the Steelers’ OC gig back in 2001. He left to become the offensive coordinator in Cincinnati and spent nearly a decade there. Since, he’s bounced around and was last coaching receivers for the Tennessee Titans in 2016. Go read my whole article on why he makes sense. Vet guy.

Mike Yurcich – Offensive coordinator, Oklahoma State. Yurcich is an interesting story. The offensive coordinator at D2 Shippensburg in Western PA, head coach Mike Gundy found him by simply doing what I did – googling the top offenses in college football. He found Yurcich, met him, and hired him. The Cowboys’ offense has been excellent with him at the helm. Would he leave his coordinator job to coach in the NFL at a “lower” position? Maybe not. But if he’s dreamed of coaching on Sundays, and getting back to PA, there’s his chance. He spent five years coaching receivers at Edinboro University in northwestern PA and graduated from Cal U in 1999. Plenty of local ties.

Tyke Tolbert – Tolbert was let go in a mass exit of the coaching staff in Denver after Vance Joseph was essentially mandated to in order to keep his job. He’s been an NFL receivers coach for most of his coaching career, breaking into the league in 2003 with the Arizona Cardinals. That year, Anquan Boldin had one of the best rookie seasons ever. He was a success in Denver, coaching up the likes of Demaryius Thomas and ex-Steeler Emmanuel Sanders.

Kevin Sherman – When it comes to the Steelers’ coaching staff, playing the connection game is always a good idea. Sherman has a couple. Sherman’s been the Pitt Panthers wide receivers coach since 2015 so he and the Steelers share a practice facility. Tomlin sees him all the time, I’m sure. But that’s not the only connection.

Go back all the way to 1995. Tomlin was the receivers coach at Virginia Military Institute…Sherman was the QBs coach and passing game coordinator. Clearly, the pair worked closely with each other. Both Virginia born; Tomlin in Hampton Roads, Sherman in Radford.

Sherman has had success with the likes of Tyler Boyd and in previous stops, like Virginia Tech, Danny Coale, who spent a brief time with the Steelers in 2014. If I had to pick a favorite, it’s him.

Here’s a couple of bonus options. Quick notes on each. Again, in no order.

Steve Meyer – Steelers’ assistant coach who has risen the ranks from being a scouting intern. Remember seeing him at Villanova’s Pro Day a couple years ago. He’s young and it would be pretty surprising to see him try to command the group. But he played wide receiver at St. Vincent and clearly, the team thinks he’s done a good job.

Tee Martin – Offensive coordinator at USC. He’s probably going to be more head coach material than going to a positional coach but he’s a former Steelers’ draft pick who has been the Trojans’ WR coach since 2012. Also promoted to OC in 2016.

Mike Denbrock – Offensive coordinator for the Cincinnati Bearcats. I’m stretching on this one. Maybe Tomlin still has some Cincy ties. Longtime coach but hasn’t made it to the NFL. WR coach at Notre Dame for several years, developing Will Fuller and a couple athletic tight ends, Kyle Rudolph and Tyler Eifert.

Jeff Scott – Longtime receivers coach at Clemson, where the team drafted Martavis Bryant. Also developed DeAndre Hopkins, Sammy Watkins, Mike Williams, lot of excellent receivers to come out of there. Big wigs are at Clemson’s Pro Day every year so they’ve likely seen him around. Scott has a football family background.

Robert Prince – Former Lions’ receivers coach again, swept up in the coaching change up there. Been coaching for a long time far and wide. Even spent a year as an offensive coordinator in the Japanese X League. Lions receivers have been pretty good.