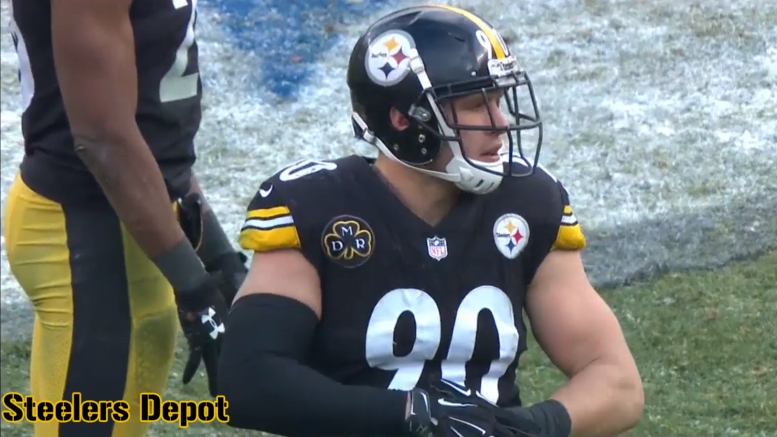 T.J. Watt may not have been the Pittsburgh Steelers’ rookie of the year in 2017, but in a normal season, he would have been. With seven sacks, an interception, a forced fumble, seven passes defensed, a blocked kick, and his fair share of tackles, this is about the best season the team has gotten out of an outside linebacker in half a decade or so.

While the team shied away from calling him raw when drafted, preferring to describe him as inexperienced, I don’t think even they anticipated the extent to which he would be able to handle coverage assignments. That said, this play to Rashard Higgins did not end well for anybody wearing black and gold, ending up in the end zone 56 yards later.

One thing that has been a mainstay since his arrival has been Watt’s adoption of the hustle mentality that has served the team’s defensive line so well. We have shown a number of highlights over the course of the season of him limiting damage by staying with a play, and his pursuit of DeShone Kizer here is an example of that.

That hustle paid off just a short time later on the same drive when he was able to notch his seventh sack of the season, chasing down the mobile rookie behind the line of scrimmage. I don’t think opponents have caught on yet to just how quick and fast he is.

He wasn’t in direct coverage of David Njoku here, but, again, his pursuit of the play after Joe Haden missed the initial tackle at the catch point remains an underrated asset.

And then he went to work against the run, recording a handful of stops against Isaiah Crowell. The Browns had first and goal, the offense trying to play Watt with a tight end. The outside linebacker easily stepped aside and chased the back down from behind after a gain of three.

Starting on the next drive, with Watt playing on the defensive left side, he worked the edge against the right tackle, keeping his outside arm free, and was able to release and make the tackle in the backfield for a loss of five.

He got the better of the right tackle again later in the game, exploding past his inside shoulder, crossing the lineman’s face as the unit shifted away. Watt was able to lunge and register a shoestring tackle for a gain of just two on first and 10.

We know of his family background and of his dedication and passion, but given his novice status at the position, it remains remarkable to me how quickly Watt became the most complete outside linebacker on the team. He is not at his peak yet by any means, but he has earned his playing time as he grows.