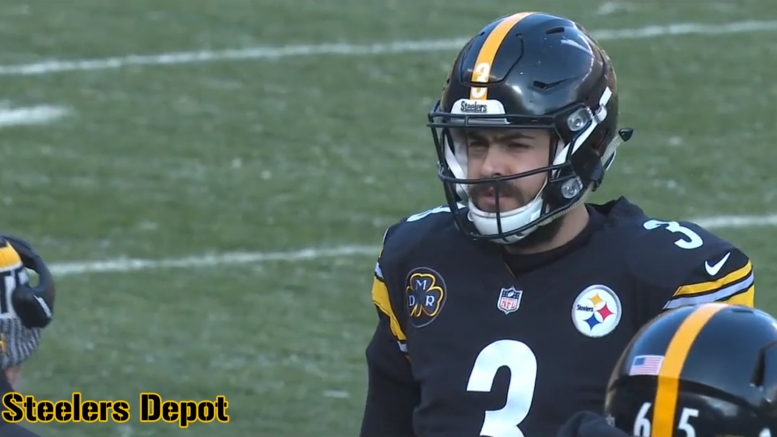 Landry Jones is certainly a player that Pittsburgh Steelers fans love to hate. The concept of a young backup quarterback who is not being groomed as a potential future franchise piece is seemingly a foreign concept to some, making it difficult to process Jones’ play through the appropriate lens.

Be that as it may, even his biggest detractors cannot deny that Jones has made progress over the past three seasons in his development, and Sunday’s game may have been his most consistent with respect to the throws that he was able to make, so I wanted to take a look at a number of examples today.

One of my favorite throws in the game actually came rather early, on the third play of the game. Facing a third and five, Jones connected on a throw with Fitzgerald Toussaint that immediately gave renewed confidence in two of his biggest issues, which were intermediate throws and precision ball placement. This was textbook, and it converted on third down.

Being in his fifth year, Jones has already grown a lot mentally. That 34-yard catch-and-run from JuJu Smith-Schuster later in the first? It’s because he identified the cornerback blitz and knew he would have an easily completion, with a chance the receiver could beat the transitioning coverage. He did.

Later on the same drive, the offense was faced with a third and 14. While this play was short of the chains—not something you want—the display of pocket presence, velocity, and ball placement here is something to hang your hat on.

Another area that has been a mixed bag is throws outside the numbers. He was able to find Smith-Schuster here—as he often did—for 10 yards on just such a throw, from the far hash no less.

Soon after, he connected with the rookie again for a 46-yard reception on the long ball. The ball was underthrown, forcing Smith-Schuster to make a contested catch, though in fairness, he had a nice deep ball to Martavis Bryant on an incompletion on the opening play of the game.

While one might argue that his performance under pressure wavered—on an early bad snap, he made no attempt to get up—he adjusted as the game wore on. Here, he fielded a low snap and quickly identified Bryant on a crossing route, resulting in a 14-yard passing play.

Ball placement is integral to successful throws underneath, and on the day, Jones consistently provided balls to his receivers underneath that would give them opportunities to run after the catch, as on this simple six-yarder on first and 10.

Facing a third and four late in the third, Jones once again was on point in his placement in hitting Bryant on a post route that allowed him to pick up 17 yards, even as he stumbled out of the gate.

Like it or not, but Jones is a quarterback who can actually do a thing or two. Make no mistake, the intention of this particular piece is to deliver something of a highlight reel, and is not intended as an objective positive-and-negative scouting report.

But the Steelers could do a lot worse with their backup position than the player Jones has developed into, especially when you take into consideration the reality that he was working with four backups, and a center who is not a center by trade who was frequently off-target on his snaps, which resulted in three sacks and sabotaged other plays.