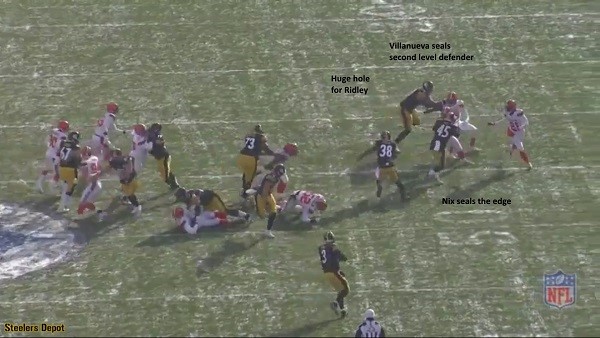 The Pittsburgh Steelers will face a familiar foe this weekend as they take on the Jacksonville Jaguars. The two teams squared off once this season, a pain inducing contest where quarterback Ben Roethlisberger threw a career high five interceptions. The Steelers will look to avoid a similar catastrophic event this weekend by handing the football to running back Le’Veon Bell – something the Steelers only attempted 15 times in the previous matchup.

While Bell will undoubtedly see an increased workload, the most important aspect is how can the Steelers utilize their franchise running back to his fullest potential. Thanks to all the master charting put together by our staff, that answer is easy to find. The Steelers have had incredible success running through the right end and right tackle all season and they should continue running this way against the Jaguars’ 21st ranked run defense. 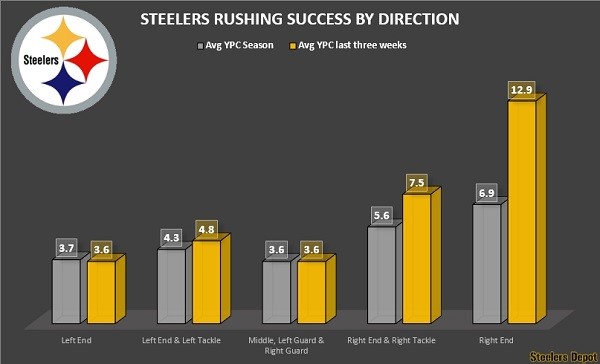 Just how have the Steelers had so much success running the football towards the right side? Well, the Steelers have used a combination of blockers and techniques but the two that remain consistent is – one player (usually a tight end) to seal the edge and a pulling lineman to lead the way.

Here is one example against the Patriots, with tight end Jesse James sealing the edge and right tackle Chris Hubbard leading the way for Bell. Other notable pieces are the second level blocks by Maurkice Pouncey and JuJu Smith-Schuster. The result is an 18-yard gain by Bell.

Here is another right end run executed perfectly against the Houston Texans. It is once again James sealing the edge but this time Pouncey and right guard David DeCastro are the ones on the move. Another important player to watch is left tackle Alejandro Villanueva, who gets about 17 yards downfield looking for second level defenders to block. The Steelers’ athletic lineman are able to provide Bell the room to run for 22 yards.

A little different case here, the Steelers are running right tackle with a different supporting cast. The running back is Stevan Ridley, the pulling right guard is Matt Feiler (#71) and in this case the lead blocker is Roosevelt Nix. Watch how the combination of Feiler crushing the edge, Nix leading the way and Villanueva’s athleticism from left tackle create a gaping hole for Ridley to run through.

Even with a few new faces, the play still works to perfection as Ridley plunges forward for 16 yards.

The Steelers have had incredible success running towards the right side in recent weeks as five of their nine carries towards the right end have gone for 15 yards or more. With athletic linemen and two weeks to rest, the Steelers need to come out utilizing their greatest strength against the Jaguars.