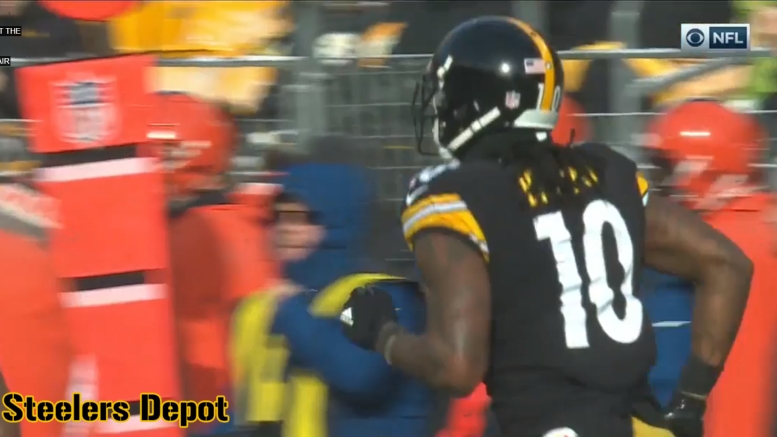 With Antonio Brown missing the final two and a half games of the regular season, the Pittsburgh Steelers have needed some others to step up and pick up some of the ample slack that the All-Pro left behind.

Among those doing so has been Martavis Bryant, who over the course of the past three games has been producing consistently, for a total of 13 receptions for 184 yards and a touchdown. He has had at least 59 yards in each game, speaking of consistency, and he finished off the season with 50 receptions for 603 yards and three touchdowns. Good numbers, in truth, for your third receiver. But we know he can do more.

Landry Jones was looking for more on the Steelers’ opening play of the season finale, targeting Bryant deep down the field right off the bat. But the wide receiver ultimately ended up getting tangled with the cornerback down the field and was unable to get underneath the ball as a result.

Going into the second quarter, the Steelers got themselves into a second and 16 after a sack that threatened to stall a promising scoring drive. Bryant was able to get the offense back on track with a pickup of 14 yards, the bulk of which came after the catch.

Late in the half, as the offense was driving during the two-minute offense, Jones was able to hit Bryant on a crossing route, schemed open with room to run. He cut back and his perseverance rewarded him with an extra five yards or so, 14 in all.

Jumping ahead to a play late in the third quarter, the Steelers were looking at a third and four, and the offense was struggling to convert on possession downs throughout the day. Here, Bryant lined outside on the right, stumbled a bit out of the block put regained his feet and put on the jets for a well-timed in-breaking route that netted 17 yards thanks to a good throw.

Recalling open-field ability that he has shown previously in his career, the Steelers have fed Bryant a lot of screens that have gotten mixed result. Earlier in the game, a third-and-two screen netted a loss of three. Here, however, it did help set up an eight-yard reception on first and 10.

He may not be entirely happy with the extent to which he is contributing, but Bryant is contributing in a rather positive way to the Steelers’ offensive success down the stretch. Even when Brown returns, his input will be needed. I foresee him delivering a couple of big plays during this postseason run.