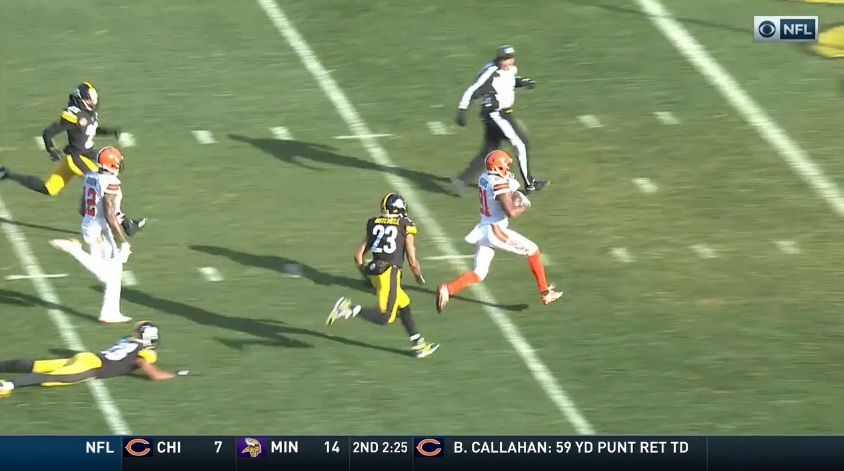 The Pittsburgh Steelers closed the book on 2017, banishing the Cleveland Browns into winless infamy while they move on to a 13-3 year and #2 seed in the AFC. So everything is kosher, right? Not for Mike Mitchell.

Mitchell spoke to reporters after yesterday’s game. After a performance where the secondary allowed more chunk plays and let the Browns nearly complete the comeback, he was none too happy.

He said the Steelers should’ve blown out the Browns and took responsibility for the score being as close as it was. Jacob Klinger over at PennLive has a really good article full of comments from Mitchell. Check out the full article in the link. Worth your time.

“It should be 30-0. You shouldn’t need to make those kind of plays at the end of the game. You got to whoop their [butt] like we’re supposed to,” Mitchell told Klinger. “It starts with me.”

Pittsburgh gave up two more receptions of 50+ yards, giving them eight on the season, and the most they’ve allowed in 19 years. Josh Gordon got them for a 54 yard gain, a concept they were burned on two weeks ago, while Rashard Higgins outran everyone for a 56 yard touchdown.

Deshone Kizer had a downright terrible year but actually looked somewhat competent against the Steelers in both meetings, a troubling thought for a team headed into the playoffs.

According to Klinger, Kevin Colbert apparently had the same thought as Mitchell. Mitchell said Colbert told him – or the group, it isn’t clear – that it should’ve been a lopsided victory. The fact that it wasn’t is disappointing.

“It can’t be a four-point game, can’t turn the ball over, can’t give up big plays, so I’m pissed off,” Mitchell said.

Cleveland lost by four or fewer points just four times in 2017. Two of those came against the Steelers. For the defense, that was only missing Cam Heyward, they didn’t go out on the high note they were looking for to end 2017 and the regular season.