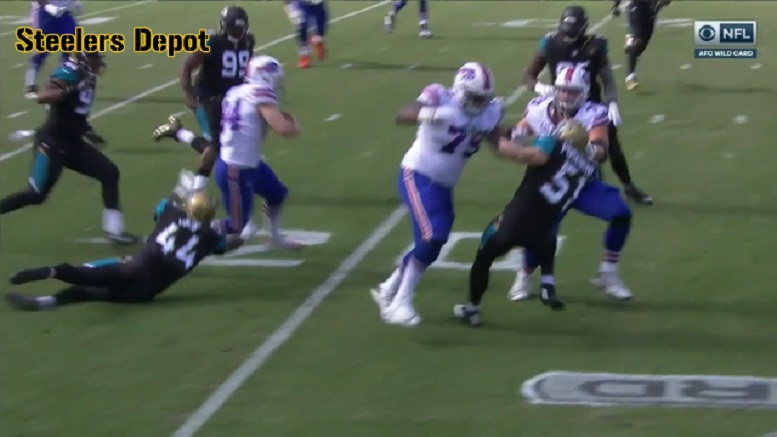 When the Pittsburgh Steelers take on the Jacksonville Jaguars at Heinz Field this Sunday, they will face a very talented pair of cornerbacks and a stellar defense that stole 5 of QB Ben Roethlishberger’s passes the last time they met in Week 5.  Any coach or fan knows that a rushing attack will be important, and RB Le’Veon Bell figures to be a key to winning this game.

Looking across the line of scrimmage, the Jaguars have talent on their defensive front 7 as well.  While MLB Paul Posluszny is no Pro Bowler this year and doesn’t come close to Luke Kuechly or Ryan Shazier in production, he has been an important part of the NFL’s second overall defense, the one that gives up the fewest first downs and only allows a 33.6% third down conversion rate.

At 32 years old, the veteran MLB isn’t on the field when the Jaguars are defending 3rd and long or when the opposing offense has 3 WR on the field.  As such, his snaps have been limited this season, and he is only on the field about a third of the time.  When the Steelers faced the Jags earlier this season, Poz only recorded 1 tackle.  Then again, Ben threw the ball 55 times in that game, so the Jaguars were clearly putting their passing defense on the field that day.

In the Wildcard game against the Bills, Posluszny was injured early in the 2nd Q.  While it was never announced during the game, this appears to be the play where it happened, with the Bills starting a drive deep in their own territory:

Bills QB completed a 13 yard pass to TE Nick O’Leary.  When Posluszny runs over to help make a tackle, he is blocked by 2 offensive linemen and goes down on his right hip.  He is off the field for the next play, which ended in an INT by the Jaguars.

On the Bills next drive, starting at the Buffalo 28 yard line, LeSean McCoy takes the ball up the middle for 12 yards.  Poz was not on the field for that play.  He returns for the next play, does not contribute, and was done for the day.

Posluszny’s injury was initially reported that day as a hip injury.  But Tuesday, it had been changed to an abdominal injury.  Although the injury report can often be vague and even incorrect (remember when Mike Mitchell’s ankle injury was initially listed as an abdominal injury and even he was surprised?), it can change in the early days after the injury as the situation becomes more clear.

This is obviously speculation on my part, but I have to wonder if Posluszny suffered a sports hernia, more accurately diagnosed as athletic pubalgia.  I wrote about this last year when Bud Dupree had this injury.  Initially, it is difficult to discriminate between a pulled muscle and a true tear of the muscle from the ligaments and bone.  Pain that is perceived first in the hip and subsequently on the lower abdominal wall is certainly consistent with this type of injury.  The player is usually treated with supportive care (RICE, anti-inflammatory medications) and returns to exercise as pain allows.

According to the injury report released yesterday by the team, Poz was listed as DNP.  He was reported to be doing individual work on the side of the field:

It sounds like Poz will at least be a limited participant today:

Even if Posluszny practices this week, there is a very real chance that he won’t contribute significantly on Sunday.  Given that all teams are playing in a single elimination tournament, there is no tomorrow unless they win.  I would guess that Posluszny will do everything he can to be on the active roster, but his body may not allow him to perform at his usual level.  There is a significant chance that he will be on the sideline or even the inactive list come gameday.  Expect the Jaguars to go with plan B, not plan P.