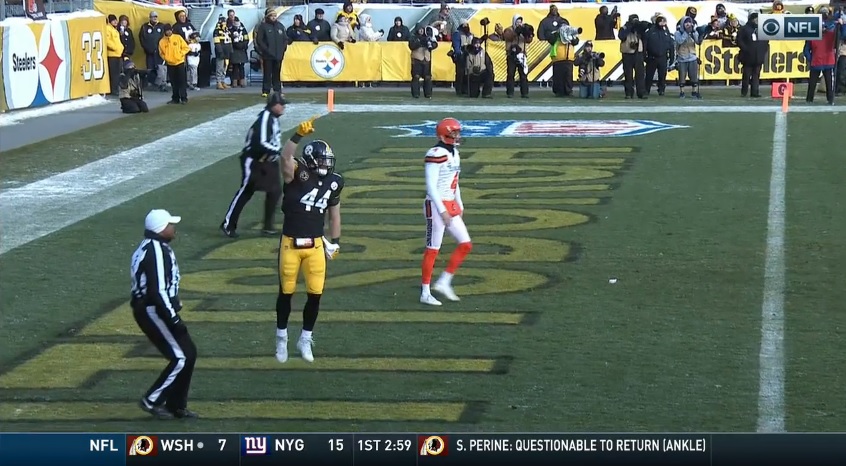 It’s been a bumpy, likely painful end to Tyler Matakevich’s season. After getting the chance to run with the starting defense after Ryan Shazier’s injury, Matakevich suffered some sort of shoulder injury later in that game. Mike Tomlin has already confirmed he’s going to need some sort of surgery after the season, restricting him to only his usual special teams work while Sean Spence and L.J. Fort get reps at inside linebacker.

He’s made the best of what I guess you could call a bad situation, continuing to excel on special teams. He’s got three tackles over the past three weeks and partially deflected a punt in Week 17, giving the Steelers great field position.

Circling back to Bob Labriola’s conversation with Danny Smith in Coordinator’s Corner, Smtih couldn’t help but praise the man they call Dirty Red.

“He’s a great student of the game,” Smith said. “He’s a hell of a special team player. He’s a great asset to us. Very productive player. I love the guy to death.”

Matakevich finished 5th on the Steelers in special teams snaps, racking up 281. He plays with the relentless effort needed on special teams and why it was so smart for the team to draft him in the seventh round. A great athlete he is not but when you’re picking in the final round, you’re looking for high effort players who are going to make the locker room better and more competitive.

And I think – excuse the rant – part of that is fueled by Smith. A guy who wears his heart on his sleeve and actively roots for his guys. Has their back, pushes them, and gets the message across of how valuable special teams in. Put it simply, guys “buy in” to the system and if you don’t have that, you definitely won’t have a great unit.

The Steelers have plenty of talented special teamers. Anthony Chickillo, Roosevelt Nix (my personal favorite), Fort, and Matakevich. Those are guys who have shown the ability to move up the ranks. All those guys have seen snaps on their side of the ball even if they were originally added to the roster as pure special teamers.