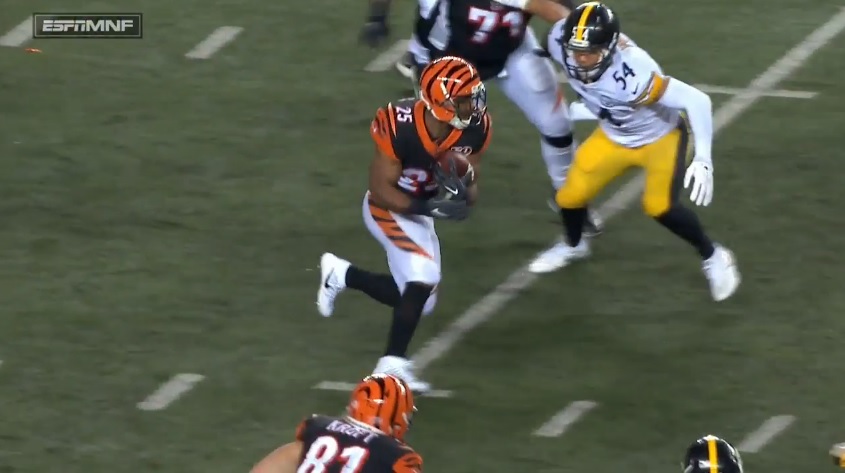 The Pittsburgh Steelers finished off the regular season as they had begun: struggling as a rushing defense. Earlier in the season, the issue was more about allowing big plays. Of late, the greatest concern has been in simply allowing too high a volume of successful running plays.

Between the slow start and finish was a fairly significant run of solid defensive play, but the return to mediocrity—or worse—largely coincided with the loss of Ryan Shazier. That is not to say that all of the run defense’s struggles fall upon the shoulders of Sean Spence by any means, but clearly there is work to do.

The rushing numbers allowed, and the efficiency, over the course of the past several games have been troubling, and the likelihood of them suddenly being able to transform into an incredibly stout team against the ground game over the course of a bye week is unlikely. But they have to try.

Spence was not on the team for most of the season, but he still knows what the issues are. There is film, after all. “Every long run we gave up this year was because we fit wrong”, he said, and of course that is generally the case when big plays are allowed.

Cameron Heyward said that the team has “got to continue to tackle and not guess”, and referred specifically to the Jaguars and Leonard Fournette, whom he said made the Steelers pay on three particular runs because they were not in their gaps.

Also key, he said, is doing it for 60 minutes. Fournette’s late game-sealing 90-yard touchdown on third down made the game look far worse than it was just prior to that, after all.

But there’s only so much you can do when you lose a key player like Shazier, and part of the adjustment is building chemistry with the person who takes his place, and developing a new balance in the unit as a whole.

“When you lose a person like that who is a big playmaker, you have to change it up and build chemistry with the guys who have come in” Stephon Tuitt told Rutter. “I think we’re going to get back into the rhythm and do what we’ve been able to do”.

The Steelers’ defense is full of younger players. At any given time on the field, they could have five or six players on the field who have three years or less in the league, or with the team. It takes time to get a feel for and a sense of trust with your teammates to be where they ought to be.